Yahoo this morning is making a play for cord cutters with the launch of a new TV-watching site called Yahoo View, featuring Hulu’s free content. The site will now become one of the only ways to watch Hulu’s TV shows and movies for free, as the company is planning to wind down its free version in favor of its subscription services – a plan that was already in the works ahead of the Yahoo partnership.

Yahoo [disclosure: Yahoo and TechCrunch will both be owned by Verizon when the Yahoo deal closes in 2017] and Hulu have had a long-standing relationship for years, which saw Yahoo acting as a distributor of Hulu content, but this particular deal has been in the works for around six months.

And while Yahoo now has the status of “preferred partner,” it’s not an exclusive distribution partner – Hulu content is also available through a number of other sources, including Comcast, and on websites that carry its player, like People.com, EW, New York Magazine, and others.

On Yahoo View, users can watch the latest five episodes from their favorite shows from networks like ABC, NBC and FOX, eight days after their original broadcast. In total, there will be thousands of TV shows, anime, movies, Korean drama, British and Latino content, available, as well as clips and other behind-the-scenes interviews, as has always been on Hulu.

What’s interesting about Yahoo View, however, is that it’s not just a Yahoo-branded web portal for watching Hulu. The service is also tied into the Yahoo-owned blogging platform Tumblr. The site is known for being an online home to a number of TV fandoms, where users blog and reblog clips, photos and GIFs, as well as follow the official blogs from the show itself. Now it will be easier to jump into Tumblr when watching your favorite shows, via Yahoo View. 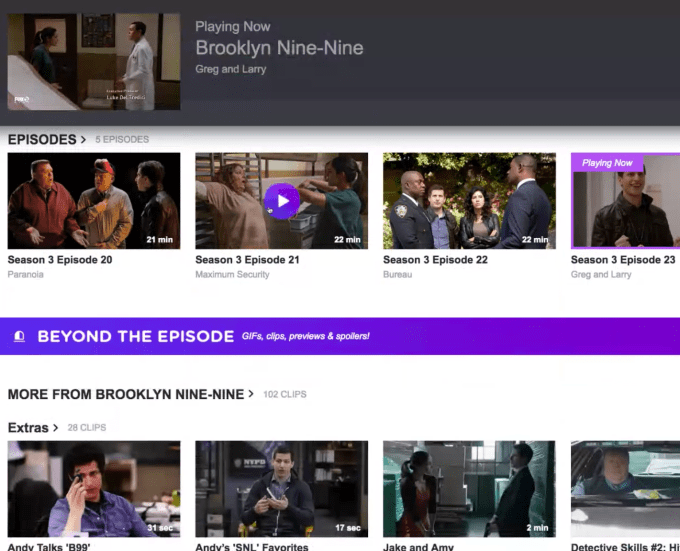 The site includes a “Beyond the Episode” section that offers picture-in-picture viewing, so you can continue to watch while also surfing Tumblr. The site will connect users to both the official Tumblr for the show as well as the fan community, where they can browse art, edits, GIFs and more. This section can also visually block content that might reveal spoilers, Yahoo says.

“Community can be really powerful in creating a great service. Yahoo knows that with Tumblr,” notes Jess Lee, who joined Yahoo after its acquisition of the fashion startup she co-founded and led, Polyvore. Lee is now Vice President of Lifestyles Product at Yahoo, which is where Yahoo View fits in. It’s a part of Marissa Mayer’s “MAVENS” strategy, which means, explains Lee, “increasing video viewing across the network as much as possible.”

However, while Yahoo View is aiming for cord cutters, it won’t necessarily become the home to other TV-like content that Yahoo hosts. For example, Yahoo in the past did deals with the NFL to live stream a game and it streamed Warren Buffett’s Berkshire Hathaway annual meeting. But content like this wouldn’t be pulled into Yahoo View in the future – it would be featured on Yahoo Sports or Yahoo Finance, where it best belongs. Yahoo View, meanwhile, will only be about TV.

Hulu’s content on Yahoo View will include ads, and the two companies do have a standard revenue-sharing deal related to that. Yahoo will not be able to run its own ads inside the Hulu player, but could eventually monetize Yahoo View in other ways, including ads on the website itself.

Hulu’s free service will be retired in a few weeks, so the company can focus on its nearly 12 million paying subscribers instead.

Yahoo View, meanwhile, is live now on the desktop, but will be available on the mobile web and as native mobile apps for iOS and Android in the near future.