If you’ve visited a business or brand’s Facebook Page in recent days, you may have noticed things look a little different. The company is now finalizing the rollout of a new, cleaner look-and-feel for Pages, which does away with tabs in favor of left-hand side navigation, and makes the Page’s call-to-action button – like “Sign Up,” “Shop Now,” “Learn More,” etc. – far more prominent than before, among other things.

These revamped Facebook Pages were first spotted in the wild earlier this summer. The new design seen then featured a larger Cover photo and omitted the display ads that normally appeared on the right-hand side of desktop Pages, a Facebook spokesperson confirmed at the time.

However, the company said then that the new Pages were only a test, and didn’t indicate that the design would be pushed to all Facebook Page owners, nor did it provide a deadline.

Over the past several weeks, more Facebook users have seen these new Pages go live and we understand that most are now seeing the Pages’ redesign at this time. A lot of people finally gained access to the new Pages this week, in fact. (In other words, if you are not seeing them yet, you should very soon.) 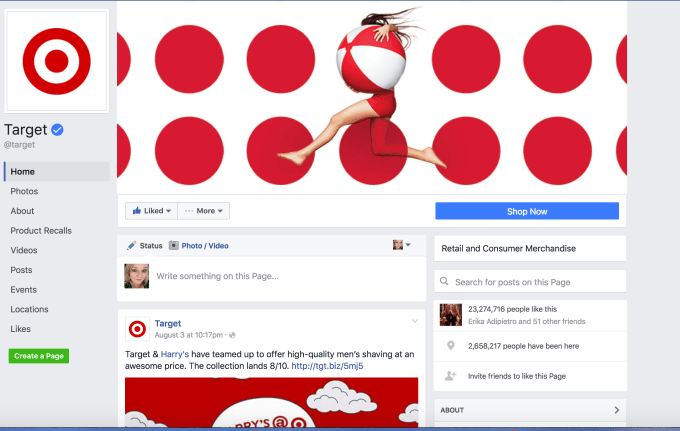 The most significant change in terms of interacting with the Pages’ content is that the new Page no longer has tabs. Instead, it feels more like a traditional website, featuring navigation on the left-hand side that will allow you to more easily browse its various sections, like its About page, or the Page’s Photos, Videos, Events, Likes and more.

As seen in the tests, the Page’s Profile Picture and Cover Photo have also been repositioned. The Profile picture now appears on the top left of the Page above the new navigation.

That means that the Profile pic will no longer block the Page’s Cover Photo, which is shifted off to the right. The Cover Photo is still the same size as before, however (828×315 pixels), so businesses will not need to make any immediate changes unless they had crafted a Cover image in a way that either worked around the Profile pic or cleverly tied the two pictures together in some way. 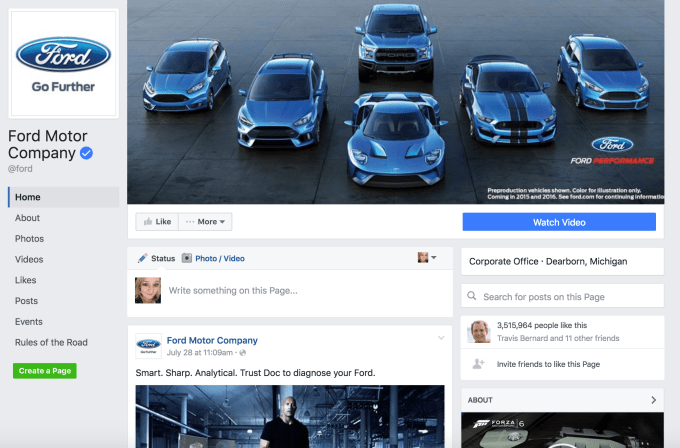 More importantly, perhaps, is the way the new Pages make it easier for customers to interact with the business or brand in question. The bright blue call-to-action button now appears on the top right, directly beneath the Cover Photo. This button can be configured to encourage users to take the action the business wants to promote, whether that’s to shop their retail site, book an appointment, learn more about their business, watch a video, or any number of things.

In order to make room for all the new elements, the new Pages also no longer sport the right-side display ads, contributing to the overall cleaner feel that accompanies this update.

While seemingly this move could have an impact on Facebook’s bottom line, the company’s most recent earnings indicate that desktop ads are no longer where Facebook generates the most revenue. Instead, the company said that 84 percent of its ad revenue now comes from mobile, and total ad revenue was $6.24 billion.

The new design is meant to bring the desktop Pages more in line with the mobile updates for Pages Facebook announced last year.

A Facebook spokesperson confirmed the redesigned Pages’ launch to TechCrunch, saying “We’ve introduced a new design for Pages on desktop to make it easier for people to learn about and interact with businesses on Facebook, including a new column for tab navigation and a more prominent call-to-action button.”

The spokesperson also confirmed the rollout is nearly complete, adding “on August 3rd, we expanded the rollout of the new design for Pages on desktop computers and it’s nearly at 100%.”

The company this week also introduced new sections for merchants on Facebook to promote their goods and services, within a services section Pages. This feature, however, is available in markets in Southeast Asia and other areas, such as Thailand, Brazil, Vietnam, Indonesia, Malaysia, Mexico, Philippines, India, Argentina and Taiwan.