Prisma morphs your photos into fine art like Picasso or Mondrian, and it’s blowing up the iOS app charts. Today it came out in unofficial APK beta on Android. But what will be the fate of this red-hot social product? We’ve heard Prisma is in talks with investors about raising funding, but it might make more sense as an acquisition for Facebook/Instagram, Twitter, or Snapchat.

When I asked Prisma co-founder and CEO Alexey Moiseenkov what’s going to happen, he told me “For now I can’t disclose all this information. By the end of the week I think we can discuss more”, signaling that some kind of deal is imminent.

In fact, Moiseenkov was at Facebook HQ this week where he showed off what looks like Facebook Live somehow running with a Prisma filter. Prisma doesn’t even offer video filters yet but says it’s working on them. That might suggest that Facebook could acquire them. Days before Facebook acquired MSQRD, Facebook execs were spotted playing with it at HQ. When asked if it will buy Prisma, Facebook tells me “We don’t comment on rumors and speculation.”

Prisma is awesome. I could spend hours running my old pics through its filters that make simple selfies and landscapes seem special.

It launched a month ago, and was profiled early by TechCrunch’s Natasha Lomas. Moiseenkov originally found an open source artificial intelligence algorithm that turned photos into classic art, but they took hours to process. His team evolved their own version that could return a finished masterpiece in seconds so it’d work on mobile.

Prisma has already climbed to become the #10 US app overall, and the #3 Photo and Video app, according to App Annie. That growth’s been fueled by a “Prisma” watermark it puts on photos that most people don’t seem to realize you can turn off in the app’s settings. It also makes it super-quick to share to Facebook or Instagram. 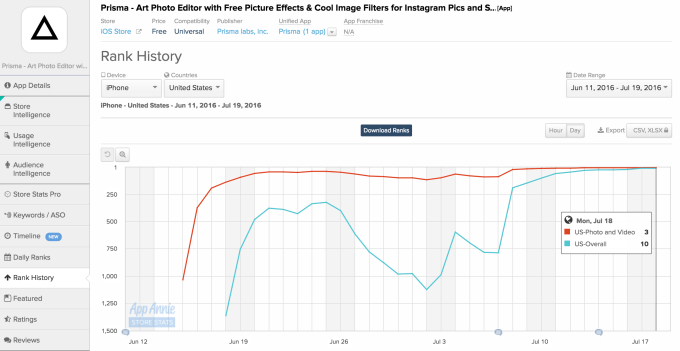 Yet Prisma has no internal sharing feed. That means in its current state, its best bet for earning money would be selling additional filters. It has a strong head-start in the AI photo art space, and Prisma is becoming synonymous with the transformations. Still, it could be cloned and undercut if it tries to monetize too aggressively.

A more sensible fate might be what recently happened to several other creative tool startups. Snapchat acquired Looksery and its animated selfie lenses for a reported $150 million. Snapchat bought Bitmoji’s personalized avatar stickers for around $100 million, and just today integrated them with its main app. And Facebook bought MSQRD, which also makes facial recognition lenses like Looksery. 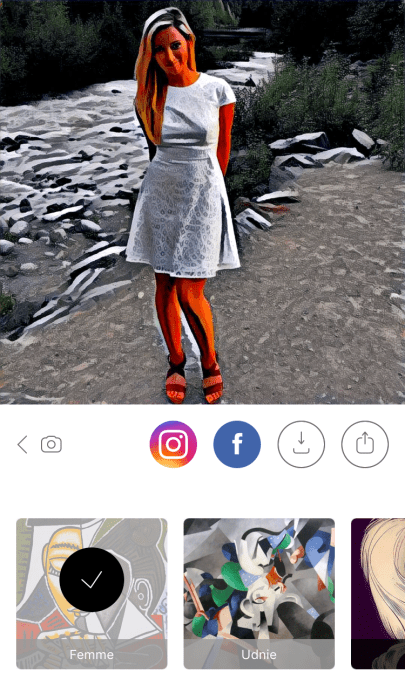 Getting built into one of the big social media apps could let Prisma concentrate on its product while reaching a massive new audience. Getting a big engineering team behind it could also cut down the filtering lag time too. The biggest barrier to using it is just that you have to wait three to ten seconds or so for each filter to load. That delay gets annoying when you want to try each filter, especially compared to the instant previews available on Instagram.

Meanwhile, its acquirer would benefit from getting more original content shared on their network.

That’s something Facebook is particularly concerned with since original content sharing has reportedly stalled. The News Feed became overrun with links while lifecasting shifted to Snapchat, and Facebook recently changed the feed to prioritize posts from friends in an attempt to course correct.

Facebook could potentially integrate Prisma with Facebook Live to encourage people to broadcast. Prisma filters could make people less self-conscious about being on camera because acne or bad lighting would be obscured.

If one of the social giants bought Prisma, it’d not only be able to burst into the space, but keep their competitors from attaining this gem of an app. Personally, I think Prisma would work best as an Instagram side-app like its products Hyperlapse for timelapses, Layout for collages, and Boomerang for GIFs. Facebook could even combine it with MSQRD into one, all-powerful next-generation social media creator.

Four years ago, Instagram launched on Android and was acquired by Facebook days later. Nowadays that $1 billion sell-out seems like chump change since Instagram has ballooned to 500 million users. Will this new startup chase the dream independently? Or will it become Prismagram or Snaprism soon?