In-home video entertainment is a very big deal. $381 billion globally in 2019 big. About $100 billion in North America big. Triple the revenue of apps and games big.

No wonder, then, that it won’t get re-worked as easily or quickly as music did. The TV conglomerates are sticking to their packaged guns, forcing any potential providers of so-called “skinny bundles” (just the channels most of us care about delivered over-the-top) to take all their channels, not just select ones. 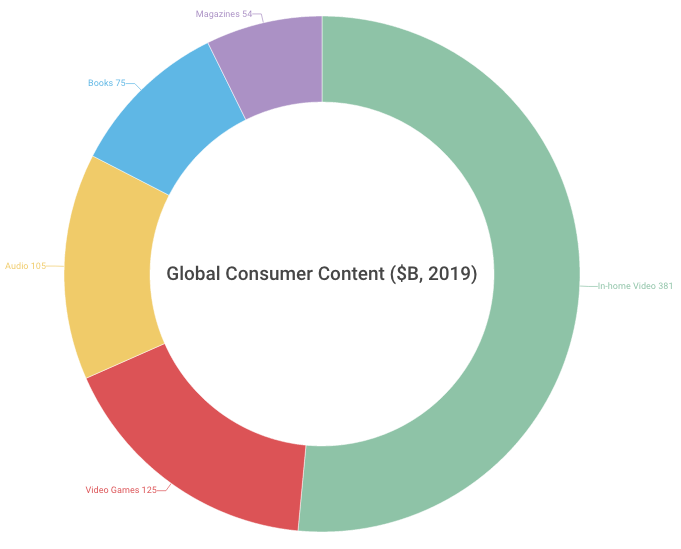 But the sheer scale of video’s business opportunity is also why Apple’s giving up  —  for now —  on the skinny bundle is not the end of the story. After all, Marshall McLuhan foretold this change in 1962’s The Gutenberg Galaxy: “The next medium, whatever it is … will include television as its content, not as its environment.”

The skinny bundle will happen, but it won’t be very skinny and it won’t feel like a bundle.

There has to be a better way

Why so much talk about skinny bundles?

For tens of millions in the U.S. alone, our video entertainment is spread across as many as five different apps on at least two different hardware ecosystems and costs us about $120-140 per month:

There is no single interface to discover across all this content. It’s like the web before search.

There is a better way

We can significantly improve the usability of all this and wring some efficiencies out of the distributed pricing.

We don’t know  — and don’t care —  which studio made “Superbad,” which record label Drake is on or who published Harry Potter’s eighth book. TV networks and SVOD providers are much the same: We care about the show we want to eye-guzzle — and the shows we’d enjoy watching but aren’t yet — not whether they’re on NBC, AMC, HBO or Netflix. Anything that shrinks the distance between us and those shows will be rapidly embraced.

But, with 409 scripted TV series in 2015 alone (double the count of only five years earlier), we have a problem: There’s too much television on television and interfaces like the gridded guides, search or even stores (à la Apple iTunes and Google Play) are not getting it done for discovery any longer.

If we bring the content from all these sources into one “celestial jukebox” and replace the current methods of discovery with a “personal shopper” with a messaging/GUI mechanic, we have a “jukebot.”

With the vast majority of what you’re interested in finally under one interface roof, the old ways will be superseded by something that will feel more like a back-and-forth conversation with a friend —  supported by all available data from the likes of IMDb, Rotten Tomatoes, Facebook and Twitter — with seamless cloud-based, time-shifting, ad-skipping technology underneath it all.

This bot for your television jukebox won’t just be easier to use, it’ll be less expensive, too. Here’s how the likes of Apple, Google, Sony (whose Vue service has made some of the most headway on this front) and possibly Amazon could go shopping to aggregate the content — and related live and on-demand rights — for $99:

That $30 monthly savings is enough to pay for things like your iPhone subscription, creating a better-and-cheaper service that will sell easily to the first 20-30 million consumers, with some segmentation and tiering to 50 million — which would mark a cross-over in subscriptions from MVPDs to SVOD. When that happens  —  as we’ve seen so many times in technology —  the new normal will only gain further velocity.

If things go the way of the $99 jukebot, here’s some tea-leaf readings for the various players:

The $99 jukebot is the alternative consumers deserve. Whoever gets there first moves themselves into the center of the most interesting and lucrative content business. Welcome, king.