I’m impatient to see breakthroughs in cars. I have high expectations for what Apple will do and respect for what Tesla has already done. I agree with Peter Thiel on the we-were-promised-jet-cars-but-got-140-characters thing, and with Larry Page, who worries that Silicon Valley doesn’t throw the ball down the field enough.

So, with all the talk of the Chevy Bolt Tesla-killer, the will-they-or-won’t-they joint venture of Google and Ford, the Tesla Model 3 March unveil, the intrigue around Apple Car, GM’s unicorn acquisition of the 40-person self-driving car-kit maker Cruise Automation and $4 billion of federal monies for self-driving cars, it’s a great time to take stock.

First look at the competition

GM: Somehow these lovable goofs in Detroit snatched victory from the jaws of defeat with the Chevy Bolt arriving this year (as Wired pointed out, they killed EV1 and sold a mere 80,000 of the hybrid Volt in five years), acquiring Cruise’s self-driving technology ingredients and betting $500 million on Lyft doing ground traffic control of the autonomous fleet down the road.

Tesla: After 10 years of Elon Musk predicting exactly this showdown for the Model 3, it will finally be time for him to compete in the brutal business of $30,000 cars with someone who’s been to that end-zone before (Mary Barra and GM) and figure out how he will create demand for 10x as many vehicles per year as he sold in 2015.

Apple: By 2019 (and possibly 2020 if the issues with the internal Jony Ive review this January cause delays), Tim Cook will be three years behind Mary (and two behind Elon). While that’s not been a fundamental problem for Apple in the past, he’ll need to ship a v1.0 of Apple Car that’s more like v1.0 of iPhone than v1.0 of Apple Watch.

Google: To be honest, after the non-announcement announcements and non-denial denials, I’m confused about whether they’re building cars with Amazon or with Ford. Or both. Or neither. In the meantime, they’ve driven the most autonomous miles of anyone. By far.

All the electrics are screwed

$2-per-gallon gas is so toxic to (at least U.S.) electric vehicle demand that sales in 2015 actually went down year-over-year (to say nothing of their utterly anemic 1.4 percent share of the market).

As gas prices eased, America’s consumers returned to buying Dodge RAM trucks with the 6.4L HEMI V8 (which is why Chrysler is crushing it). Turns out Mary’s surprise victory, all of Elon’s hard work, those 100 acres Tim bought in San Jose so he can cover them and do Project Titan R&D beyond spying eyes and all of Larry’s millions of autonomous miles driven are all pointless, because we just want to drive trucks.

It’s not about the propulsion

But, wait. Don’t despair at the prospect of more of the same. This will be the disruption you seek.

However, the coming upheaval in cars won’t be about metal, drive-trains or batteries (or even particular autonomous systems). It will be about the experience inside.

For all but the car enthusiast, a car is not about the car. Or even about the act of driving. It is about getting somewhere in a way that does not suck. If Uber’s meteoric rise has taught us anything, it’s that if you could have someone (or something) drive you, you would.

For more than 100 years, driving has been mostly about handling the car, some about your comfort and a tiny bit about your cabin experience.

In the next 5-10 years, as we are increasingly  —  and eventually entirely —  relieved of having to handle the car, driving will be nearly 100 percent about the cabin experience. Whether you are being moved by fossil fuels or electricity will be incidental (beyond Ben Thompson’s excellent point that electric vehicles are a playing field reset that enables the disruptors like Tesla, Google and presumably Apple).

Never get involved in a land war in Asia.

In the cabin, beyond your seating comfort  —  which has been commoditized —  content, connection and physical and digital interfaces will make all the difference.

The car will be an accessory to the most popular device in our lives: the phone.

When in the hands of Silicon Valley’s user experience experts, this will be so much more than large displays in the dashboard featuring the content, apps and interfaces a billion of us are already familiar with extended to the context of the car.

It will be a re-imaging of the entire interior experience in which we will eventually consider things like windshields without wall-to-wall integrated transparent displays for information and entertainment as anachronistic as physical keyboards on our phones (don’t scoff, your windshield is smaller than a 65″ TV, 4K versions of which are already down to $1,500 today, and millimeter-thin transparent displays of that size have already been shown by LG, Panasonic and Samsung), and wonder where mixed reality glasses have been all our lives.

That —  pardon the terrible category name  —  is a smart car.

A second look at the competition 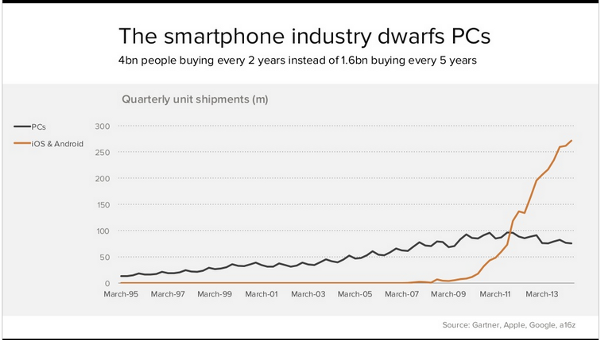 Replace “electric vehicle” with “smart car” and the picture may well be very different.

I’ll admit to a lazy comparison, given the greater than 10-100x difference in price between cars, PCs and phones, but there is no reason that 2019 smart cars can’t be to cars as 2007 smartphones were to PCs: The beginning of a big share shift (although total volume will not go up as it did with smartphones and PCs) that will  —  in many segments  —  threaten incumbents.

Not wholesale displacement (e.g. Nokia, Blackberry, Motorola), but a negative impact in desirable and profitable segments similar to what happened to PCs, which are predicted to stabilize at 32 percent lower volume than their 2011 peaks. That could mean millions of vehicles less annually for incumbents.

In the context of that shift, here’s another look at the players:

GM (and other OEM incumbents): Look at the interfaces inside your car. Do you love them? Turning the rearview mirror in the Bolt into a screen that shows the rear-facing camera is a nice touch, but the incumbents are bringing butter knives to an interface railgun fight in the segments of the market that will be driven by cabin experience. Low-end, trucks and performance will be spared, but the luxury badges need to watch out.

Apple CarPlay and Android Auto: Can the incumbents save themselves by turning a screen over to the apps we know? I’ve used Apple CarPlay and it’s a sad-face shadow of an Apple experience. Not quite Motorola ROKR bad, but not the winning move.

Google: Responsible for 80 percent of our smartphones and leader in autonomous car systems. Presumably the supplier to everyone who will not build a completely vertically integrated smart car. May win on volume, but like Android, will lose on profits. That’s a success for them here.

Tesla: The best in-cabin experience today (by a country mile). May become Google’s biggest future customer, beating all but …

Apple Car: Never get involved in a land war in Asia. Never tangle with a Sicilian when death is on the line. And never, ever get into a user experience battle with the hardware/software integration  —  not to mention velvet handcuff ecosystem —  of Apple. While they admittedly appear to be missing other large pieces of the smart car puzzle, including manufacturing, autonomous systems and retail and service, you simply cannot bet against them with three-ish years to go and Tim Cook seemingly ready to play Santa Claus.

In the lucrative segments, Apple wins. Google supplies the rest — although a few will try to roll their own.