Launching today at TechCrunch Disrupt NY 2016 is a new service called Bark, aimed at parents who want to keep their kids safe online. Unlike traditional “parental control” software or net nanny-type watchdog applications, Bark’s goal is to strike the correct balance between respecting a child’s right to privacy and protecting them from online predators and cyberbullying, while also looking out for issues like sexting or mental health concerns.

The idea for Bark comes from a founding team of parents themselves.

CEO Brian Bason previously served as a founding employee at YouCast (sold to SocialChorus), co-founder at Crowdstream (sold to RadioIO) and, most recently, was CTO at Niche, acquired by Twitter.

Bason, whose kids are now 8 and 11, left Twitter last July to begin working on Bark.

“So much socialization happens through connected devices. As a parent, that raises the question of how you keep them safe in that environment, but still let them explore and harness the power of technology,” Bason explains. 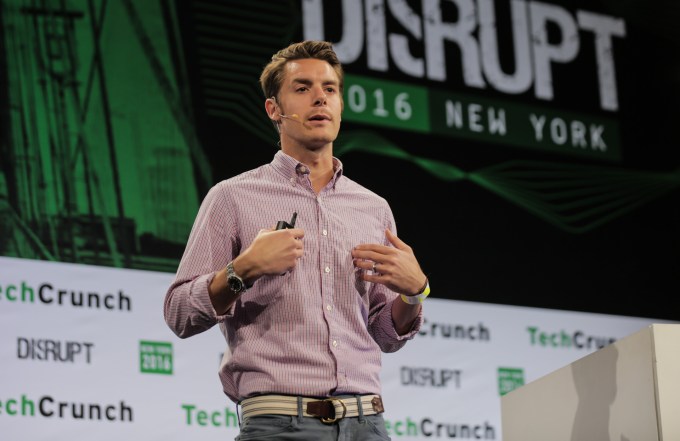 The problem is that there’s not a great solution for this today. Either parents have to install spyware-type applications that record everything the kid does online, or they have to regularly grab their kids’ phones and read their texts, log in to kids’ accounts using their passwords and basically make a huge manual effort to stay on top of their kids’ online activity and communications.

This process isn’t ideal for kids, either.

“The child feels like they have no privacy or ability to socialize independently of their parents,” notes Bason. “And it sucks for the parents because it’s so time-consuming,” he adds.

Bark makes the process much easier. 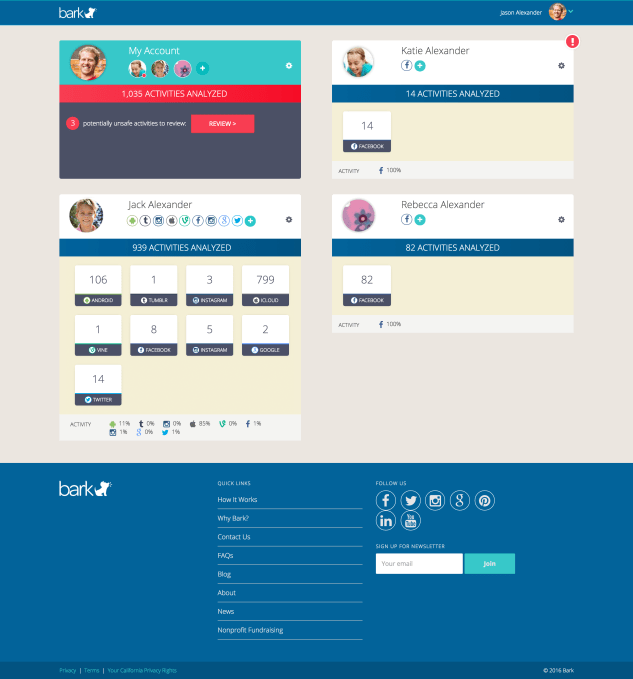 To use the service, parents sign up online at the Bark website, add their kids, then work with the children to connect their social accounts. This is done via OAuth — meaning you’re giving the software access to read and view information from those accounts, but you’re not giving Bark permission to store that social data on its own servers indefinitely.

At launch, Bark supports the top social networks and apps, including Facebook, Instagram, Twitter, Vine, Flickr, Tumblr, Google+, YouTube and GroupMe, as well as email accounts hosted on Gmail, Hotmail or Yahoo. Plus, unlike many parental control-type applications, it also supports SMS and MMS messages on both iOS and Android.

This is part of Bark’s “secret sauce,” explains Bason, but says that it’s done by way of an app installed on the child’s Android phone and through an OAuth connection with iCloud on iOS.

Once set up and configured, Bark uses machine learning techniques to look for incidents of dangerous activity, whether that’s cyberbullying, sexting, a child interacting with an older stranger who could be grooming them (as online predators do) or even signals that the child could be experiencing a mental health concern like depression or suicidal thoughts. 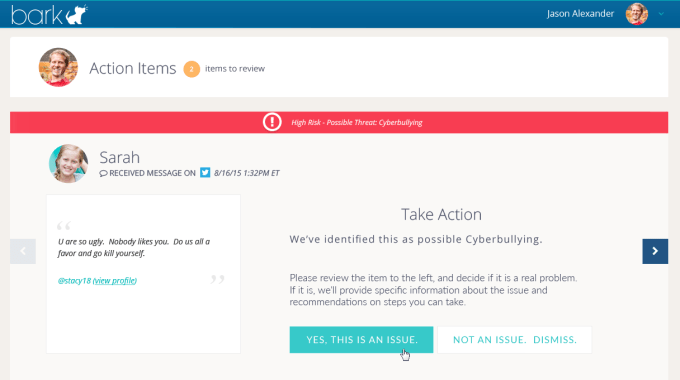 Parents can be choosy about which alerts they want to receive and how — both email and text alerts are available.

When Bark finds something questionable, it sends an alert to the parent that not only contains the relevant conversation, when and where it took place, but also recommended ways of handling the issue appropriately.

Bark’s advisory board includes leading researchers and child psychologists, as well as law enforcement professionals who handle online cases involving children. Combined with research pulled from the NIH and other resources, Bark makes an effort to guide parents in the right direction when it comes to handling these concerns.

The system is smart, too — because it’s able to look at the context around a conversation and not just flagged keywords, it knows when someone is jokingly saying “ugh, I hate you” (for example, because the child just got a new, cool game) versus when someone actually means it.

Since its soft launch in February, Bark has analyzed more than a million messages, and found that 52 percent of its user base had at least one problem identified via its software.

What’s great, too, is that Bark is actually affordable. It’s priced at $9 per month regardless of the number of children you have, or $99 per year.

Bark competes with a handful of other solutions, including VISR, more traditional software programs and cyberbullying-specific solutions like ReThink or STOPit.

The company, also co-founded by Brandon Hilkert (CTO), has raised just over half a million dollars in seed funding from Karlin Ventures and Social Starts.