Parents today can be overwhelmed when trying to keep up with their child’s online activity, and often fail to spot troubling behavior like bullying, threats, sexting, and even possible mental health issues. A new app called VISR, which launched publicly just in time for back-to-school, has now closed on a million in funding to help alert parents to safety issues involving their children’s social media and apps usage, without parents actually having to spy on their kids’ accounts directly.

Instead, the idea with VISR is for parents and kids to have a means to better communicate about using the web and social media safely, not having mom and dad stalk the child’s every single internet posting.

Unlike some competing “net nanny” type applications, parents don’t necessarily need to have their kids’ login information, nor do they need to friend or follow them on the services in question. The way VISR works is that parents can either enter in the credentials if available, or they can send the child a link so the child can connect their social media accounts themselves. Parents can also customize the email that VISR sends to explain what it is and why they’re asking for the child to use it.

VISR, which is aimed at parents of children 8 to 14, supports the majority of the most popular online services, including Facebook, Instagram, Twitter, YouTube, Gmail and KidsEmail (another email app for children). More services will be added in time, the company says. 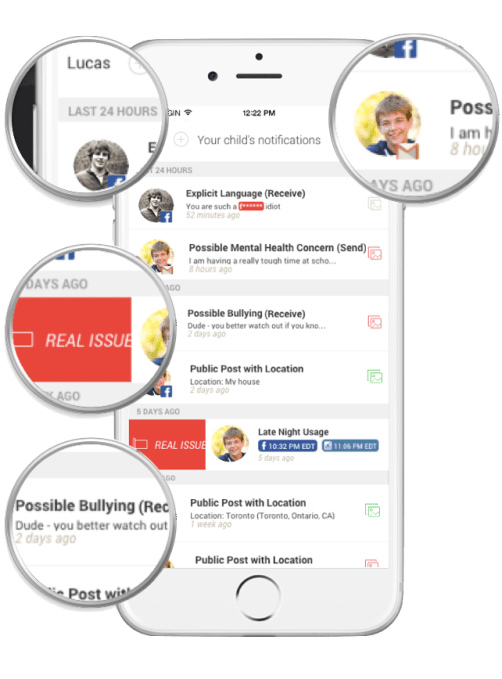 After installing the app and connecting to the children’s online accounts, VISR then scans for safety issues and other threats, and only alerts parents if there’s a problem. The company uses data science, including semantic technology and natural language processing, to better understand the content of children’s posts and it improves over time. Parents essentially help train the app by responding to the alerts and marking them as a real issue or a false alarm.

At present, there are 22 alert categories, containing a total of 48 classifiers. This includes high-level categories like bullying, which may then include sub-categories like insulting someone’s character, exclusion, or threats. VISR also watches for things like sexting, explicit content, violence, drugs, late night usage, irresponsible geo-tagging, and mental health concerns like depression, self-harm, and suicide.

As we know from watching media reports in the wake of devastating tragedies involving children who harmed themselves or others, there were often warning signs and red flags that popped up on their social media accounts before the act took place. But the problem today is that parents often don’t understand what to watch for, don’t understand how to use technology, or simply don’t have time to stay involved and become overwhelmed with the responsibility.

VISR aims to simplify parents’ monitoring while still respecting the kids’ rights to not have a hovering mom or dad reading their every word.

The startup was founded last July by Robert Reichmann, a parent of four, whose background is in non-profits including KamaTech, which aims to integrate orthodox engineers in the Israeli high-tech industry. Because of his work in this space, when he was ready to start a consumer tech company, he decided he wanted to work on something that would make a similar impact, he tells us.

“I didn’t grow up with [Facebook] in the way that my children are growing up with it, but I appreciate it in a less negative sense than most people,” Reichmann explains. “This is the world that we live in today, so how can we help children navigate it, rather than undermine them, spy on them, or just completely ignore it – which is what a lot of other people do?”

“Communication is key in order for children to be safe. That’s a fact,” he adds.

The new funding is a seed round entirely from Horizons Ventures, and is the Toronto-based startup’s first real financial backing outside of government grants and a government-provided convertible note, which allowed the company to first get off the ground.

Since its beta trials, VISR has grown to a few thousand users and has sent out 16,000 alerts to date.

At present, VISR is a free app for both iOS and Android and is available via the web, but will move to a subscription service in time, priced at $5 per month.