LinkedIn’s acquisition of the popular email add-in Rapportive, and its subsequent demolition as its new owner ripped out some of its best features, left a lot of users angry and scrambling for an alternative. A number of these have since launched, but a newcomer called Connect arriving today from Clearbit may be one of the best to hit the market yet.

Clearbit may not be a household name, but the company is today serving as the data backbone to a number of technology businesses, including Asana, Braintree, Slack, Stripe, Zendesk, Zen Payroll, AdRoll, Intercom, Bugsnag, Mention, Segment and hundreds of others.

It offers a suite of some half a dozen APIs focused on scouring the web and other data sources for publicly available information on people and businesses. This information can then be put to use for a variety of purposes by its customers – like generating data about new sales leads, as Asana does, for example. Or it can be used for risk and compliance purposes, as Braintree does when underwriting new merchants. 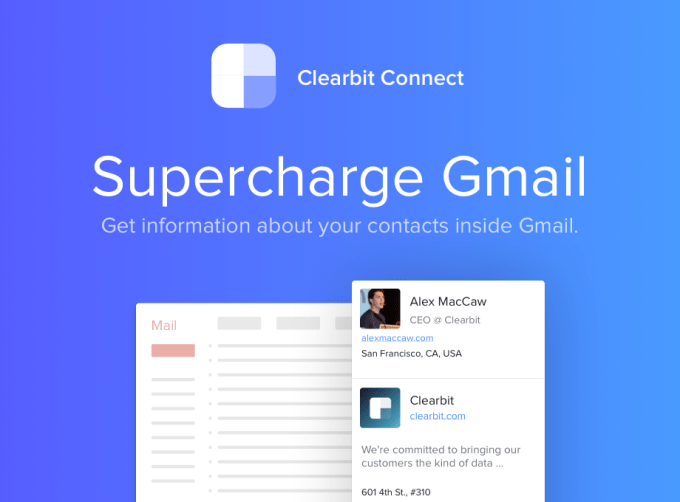 Until today, the company did not offer a consumer-facing product. However, they realized there was room in the market for one after Rapportive’s closure – especially since they already had the tools that made email lookup possible.

“We were big fans of Rapportive back in the day,” explains Clearbit co-founder and CEO Alex MacCaw, “and we were pretty disappointed when all the features were taken out of it.”

The company, a small team of eight based in San Francisco, decided to solve that problem for themselves.

With the newly launched Gmail add-in Connect, you get a sidebar widget like you once did with Rapportive. This widget offers details on not only the person you’re emailing with but also information on their company, when available.

This information includes the person’s name, photo, title, location, URL, and social accounts as well as the company’s name, address, and other details like number of employees, type (public or private), funding, tags, and social accounts, among other things.

If that’s all Connect did, it would already be better than Rapportive, which focuses more on the person you’re in touch with, and not the details of their company.

However, Connect goes a step further. It can actually provide you with an email address for someone when you don’t have that information on file in your address book. 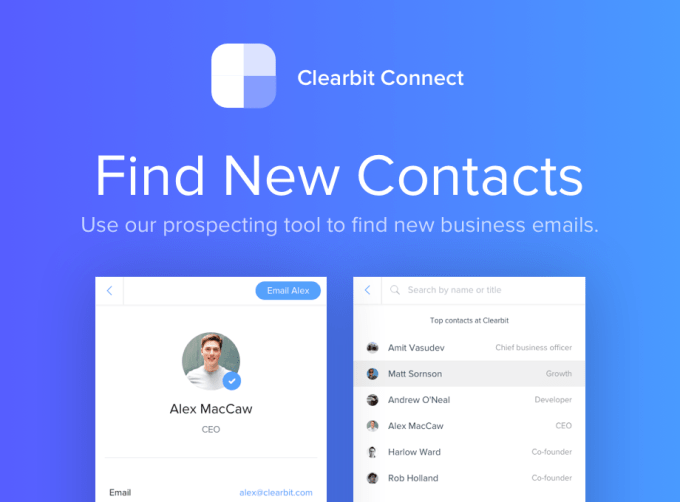 Connect is so much easier.

From the Gmail “Compose” screen, you click the Connect button and a new window appears. Here, you type in the company domain – which helpfully auto-suggests matching companies as you type. You then enter in a person’s name or title. In the list of matches that appears, you click the name of the person you want to email and – boom! – there’s their email address.

This, of course, is a double-edged sword. While super convenient for end users looking to send out emails, it also means that those who like to keep their email address more private will have some trouble doing so in the future.

As with Clearbit’s APIs, this system works by scouring the web for public data. For companies, that means crawling websites, SSL certificates, Schedule D filings, government records, social networks, and more. But for people, it’s not only relying on what’s publicly available on the web and in some public data sets Clearbit buys – it’s also relying on Connect’s user base. 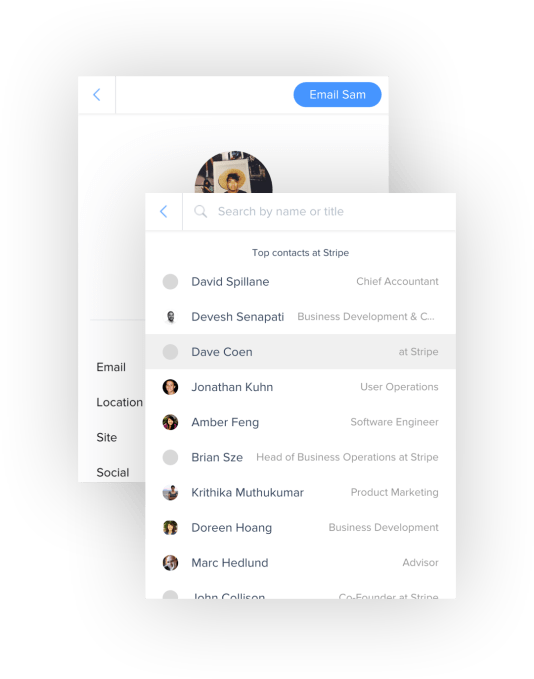 The widget has a button (at the top right) that lets users flag and fix bad data. Now that Connect is exiting from its private beta of 7,000 testers, its ability to leverage the crowd to correct its database of people and their emails will now greatly improve.

For the privacy-minded, you should know that, like Rapportive, Connect requires “read” access to your email so it can parse the metadata in the headers.

“We’re very clear upfront when people install it.. We try to let people make an educated decision for themselves,” says MacCaw. “We never store any of the email, we just look at the metadata…it’s essentially a give-to-get model,” he adds.

Connect is free for the time being, with plans to introduce a premium tier offering more email lookups per month for paid users. Plans to address other platforms including Inbox, and Outlook and Apple Mail on the desktop, are also in the works.