Google announced this morning that it’s renaming its Chromecast application to “Google Cast,” in an effort to better reflect how the technology works across an array of devices, including not only the Chromecast dongles, but also TVs, displays and speakers. The company says the updated app, available for both iOS and Android, will roll out this week for all users.

Chromecast, as you know, began as a low-cost competitor to more advanced streaming media players, like the Roku, Fire TV, Apple TV, or even Google’s own Android TV, for example. Launched back in 2013, the device made it simple to just “fling” content to your TV – even if it wasn’t a smart TV. Its ease of use and cheap cost allowed Google to sell some 20 million+ of its original Chromecast dongles, making it the most popular streaming device in 2015.

However, in more recent months, Google has been expanding the original product line and the technology platform. Last September, it introduced a second version of the Chromecast  – Chromecast 2 – which also unveiled a hardware redesign, turning the Chromecast from a stick to a new, round device that’s easier to plug into TVs. It also launched Chromecast Audio at the same time, which turns any speaker with an AUX input into an Internet-connected device.

Plus, the company has been working with partners to get its casting technology built into products themselves, including Sony, LG, B&O Play, Harman Kardon, Onkyo, Philips, Pioneer, Raumfeld,  Frontier Silicon and StreamUnlimited, which are offering Chromecast Audio-enabled software and hardware, for example. TV makers, like Vizio, Sharp and Sony, support Google Cast technology (sans dongle) on select sets, as well. 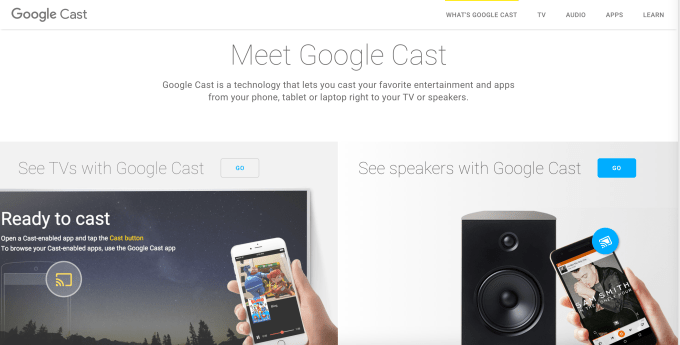 Related to this, Google also announced today that VIZIO’s new SmartCast P-Series displays and VIZIO soundbars and speakers will also now support the Google Cast technology. That means users will be able to cast from services like Netflix or Google Play Music from their smartphone or tablet, as well as mirror websites on the big screen using a Chrome browser on a laptop. Plus, Google notes that the P-Series will support casting in Ultra HD (up to 4K) and Dolby Vision High Dynamic Range content for bright and clear colors.

The rebranding is rolling out now, but not everyone will see the updated app as of this time.

In addition to the new app, Google has launched an updated Google Cast website, too, which now includes a list of those speakers and TVs that support casting without extra accessories.