In case there was any doubt where Instagram was drawing the line when it came to its shutdown of third-party feed reading apps, it appears that its decision to revoke API access doesn’t just extend to those that offer an alternative means of browsing the photo-sharing service. It also reaches apps that offer an expansion of what you can do with Instagram – for example, the recently launched app Being, which let you peer into another user’s Instagram for the purpose of discovery, has already been killed off.

The app launched in February to a bit of press coverage, including here on TechCrunch, as well as on The Verge, Re/code, Business Insider, The Next Web, Motherboard and New York Magazine. The well-designed app’s concept was simple – it allowed you to browse Instagram as anyone, whether a pop star, celebrity, techie, politician, tastemaker, or even a brand. You could also use the app to view a friend’s Instagram feed, which, in reality, was more interesting than “being Taylor Swift” on Instagram, for example.

But the app was plagued with problems as soon as it debuted. Its servers almost immediately crashed, initially due to Amazon Web Services performance issues. Then, as the app became featured on the iTunes App Store and by non-tech news media sites like BuzzFeed, Perez Hilton and even Teen Vogue, it struggled under the influx of new users.

But as an early stage startup, these are good problems to have – building an app that’s popular enough to attract attention is not the worst thing that could happen, though stressful. According to Being’s founder Adam Mashaal, after having been live for just over a week, the app had seen nearly 50,000 downloads, had been featured as a “Best New App” on the App Store in 92 countries, and over 500,000 feeds had been viewed by users.

However, the perils of building on top of another’s platform – and especially one which notified third-party developers to stop doing so – soon emerged. On February 25, with no word or warning, Instagram simply pulled Being’s API access. Subsequent attempts to reach the company to discuss failed, says Mashaal, who detailed the whole saga in a blog post.

(Update: We now understand Instagram did reach out to Mashaal but, for whatever reason, that email was never received, the developer says.) 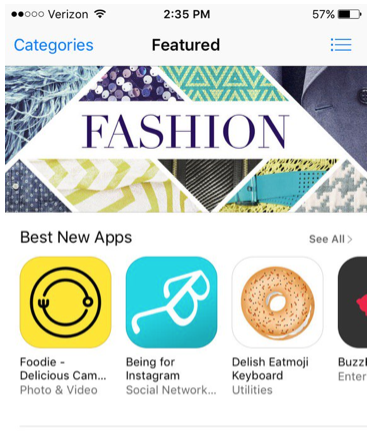 If anything, his experience should be a word of warning to fellow developers hoping to skirt around Instagram’s new API rules. That is, Instagram’s platform now only permits photo-editing apps and those that let you pull in your own Instagram photos (like Tinder does), brand and ad management apps, and tools for media and broadcasters.

What’s interesting about Instagram’s decision is the potential it has to harm its still-growing community. Twitter, notably, took a similar direction many years ago. It told its developers that they should no longer compete with the company by building third-party Twitter clients, but rather should focus on other areas, like data and verticals. Fast forward several more years, and we now find Twitter having stagnated in terms of user growth.

Instagram, a hugely popular mainstream application, may never have this problem, of course. The Facebook-owned company has already grown to 400 million users, topping Twitter. In other words, it’s possible that Instagram’s decision to limit outside innovation may not have the same impact on growth that Twitter’s decision once did. Time will tell.

That being said, Mashaal laments the larger shift that Being’s shutdown represents. “The API culture was created to foster innovation and development,” he says. “Companies looking to grow would invite developers to build on top of their platform and leverage their existing data and tools to grow companies of their own. It was a beautifully symbiotic relationship.”

“Things have changed. The larger corporations that independent developers helped cultivate over the past 5-10 years are now big enough to stand on their own. The app culture is becoming more and more centralized, and it’s winner-take-all with no holds barred,” says Mashaal.