Despite a late arrival to the wearables market, Apple claimed the top spot in terms of device sales, according to new research from Juniper out this week, which stated that the Apple Watch accounted for over 50 percent of smartwatch sales in 2015. Even more impressive is the fact Apple’s Watch only launched at the end of April – meaning it claimed the majority of the market with less than a year of sales under its belt.

Meanwhile, rival smartwatch platform Android Wear earned less than 10 percent of sales in 2015, the report said, even though the software now powers watches made by a number of companies, including Huawei, Motorola, Sony, ASUS, LG, Fossil, and others.

“Most other smartwatch sales are currently coming from cheaper, simpler devices from a range of smaller players, such as Martian, X and Razer, the latter with the recently-announced Nabu Watch,” added Juniper, detailing its findings. (For what it’s worth, the Nabu Watch is barely a smartwatch – even the company describes it as a digital watch with ‘smart’ features.) 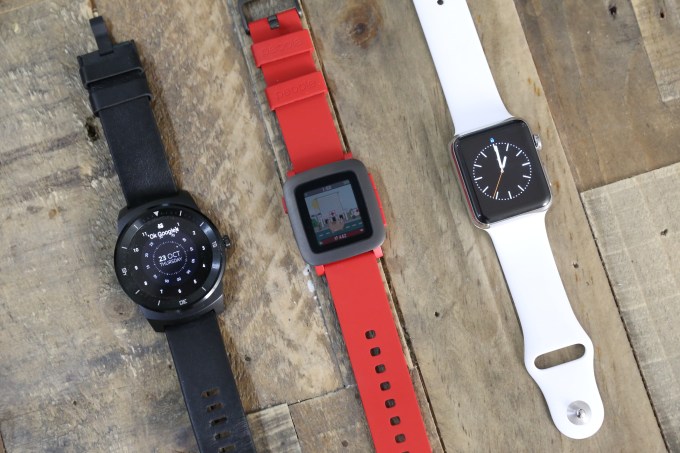 Apple’s presence in the smartwatch market is also making it harder on its rivals to compete, as evidenced this week by Fitbit’s crashing stock.

The fitness tracker maker had unveiled its new smartwatch, the Fitbit Blaze at CES, and was immediately punished by Wall St. for daring to compete with Apple. Almost immediately, Fitbit’s stock dropped over 18 percent following the announcement, indicating investors’ lack of confidence in the device manufacturer’s ability to take on Apple on the high-end, as well as other established smartwatch makers further down the spectrum, such as Pebble.

Fitbit’s stock continued to slide this week, bringing it to an all-time low only weeks after it had been riding a post-holiday high. (The earlier bump was due to the discovery that its Fitbit app had risen to the top of the App Store – which likely meant great holiday sales.)

However, just because Apple is running away with the lead thanks to its 52 percent market share, that doesn’t mean the smartwatch market itself is anywhere near established, Juniper also warned in its report.

“The smartwatch is now a category waiting for a market,” wrote Juniper research analyst James Moar. “Newer devices have offered more polished looks and subtly different functions, but no large changes in device capabilities or usage. With smartwatch functions established, it is now up to consumers to decide if they want them, rather than technology companies providing more reasons.”

In other words, the future of the market is in the hands of consumers – who may or may not feel the need for wrist-worn technology to invade their lives.

Juniper’s findings backed up earlier research from IDC, which also said Apple would lead the smartwatch space in 2015, with Android Wear coming in a distant second. IDC had actually estimated that Apple’s share would be higher at 61.3 percent, versus Android Wear’s 15.2 percent share. 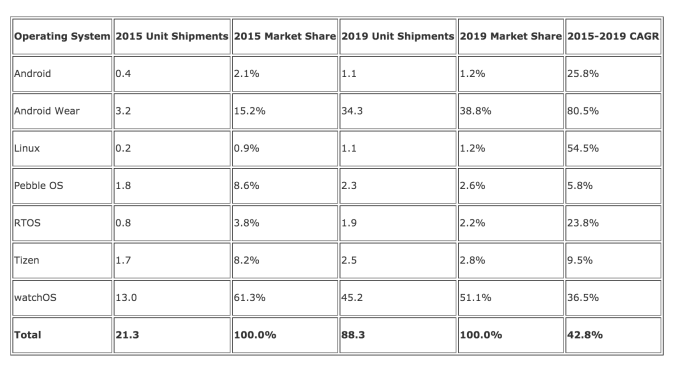 Pebble, IDC also noted, would cede market share to both Android Wear and Apple’s watchOS platforms, but not disappear. Samsung’s Tizen, meanwhile, was pegged as the “dark horse” in the space, thanks to its compatibility with Android smartphones and large app selection.

Additionally, IDC estimated the wearable device market would reach a total of 111.1 million units in 2016, up 44.4 percent from the 80 million units shipped in 2015.

While Juniper and IDC’s reports largely focused on smartwatches, Apple’s share is growing in the overall wearables market as well. Another recent report, also from IDC, had pegged Apple as the number two wearable worldwide, coming in just behind Fitbit and gaining quickly.