Google has plans to accelerate your web browsing on mobile devices, and we’ll start seeing the results of those efforts as early as next year, the company says. According to a new update regarding Google’s “AMP” project – or the “Accelerated Mobile Pages Project,” as it’s also known – thousands of publishers have expressed interest in having their pages optimized, including now a few more big names like CBS Interactive, Thrillist, International Business Times/Newsweek, Al Jazeera America, AOL [disclosure: TechCrunch parent], and others. Additionally, ad partners Outbrain, AOL, OpenX, DoubleClick and AdSense have also now announced their plans to work with the new framework.

Google announced the AMP Project in October, describing it as a technical specification for faster pages – especially those on mobile devices. The project was positioned by some as a competitor to Facebook’s own Instant Articles – a program that hosts publishers’ content in the News Feed.

The idea, with both projects, is that publishers’ sites have become bogged down with extraneous code, tracking scripts, and advertisements that slow down the pages’ ability to load quickly on mobile devices.

Not only does this mar the end user’s experience, it also consumes mobile data, which can still be costly. Plus, users who get frustrated while waiting for a page to load may choose to just exit the site, limiting the effectiveness of publishers’ tricks and tools to keep visitors on the site longer, where they could click on ads, or read or interact with other content.

The problem of slow-loading mobile web pages has become so common that Apple even introduced a way for users to block ads and other website content, like tracking scripts, fonts, and more, in iOS 9 by way of third-party Safari extensions.

Publishers have begun to fight back against this approach – either redirecting users to subscription sign-up pages when ads are blocked, or – in more extreme cases – even taking the ad blockers to court to try to get them shut down.

Facebook’s response to the same problem has been to host publishers’ content directly in the News Feed, speeding up load times while still offering layouts and formats that make the Instant Articles feel like publishers’ websites. The New York Times, BuzzFeed, National Geographic, NBC News, The Atlantic, The Guardian, BBC, Slate, Daily Mail, Huffington Post, The Washington Post, Vox Media, and others are already trialing this format.

The publishers keep 100 percent of their ad revenue when they sell their own ads, or 30 percent if Facebook sells the ads, according to reports. 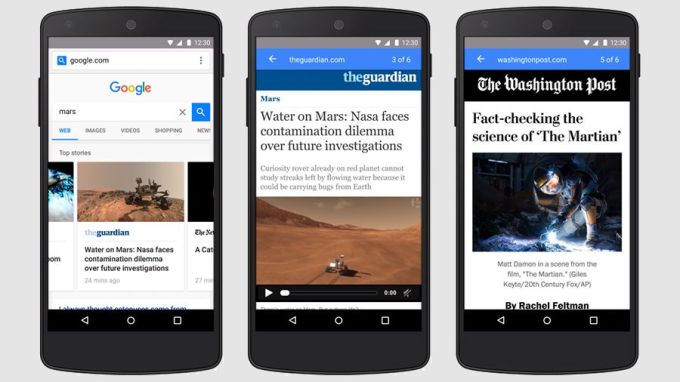 With Google’s AMP Project, the goal is to work with publishers – similar to what Facebook is doing – instead of against them, as with ad blockers. As the original blog post acknowledged, Google understands that publishers want to include rich media, need to implement ads to keep their content free, and need to be able to utilize analytics. AMP is not about blocking this content, but rather optimizing its performance.

An open source initiative, AMP is aimed at making web pages load instantaneously, even when they contain rich media like video, animations or graphics, including things like Twitter and YouTube embeds. The project utilizes AMP HTML, a new open framework based on existing web technologies that allow for lightweight web pages.

When Google first announced the news of the project’s existence, it said that it already had signed up nearly 30 publishers worldwide to participate and was partnering with other technology companies as well, including Twitter, Pinterest, LinkedIn, Nuzzel, WordPress.com, Chartbeat, Parse.ly, and Adobe Analytics. (Oh, and of course, Google.) 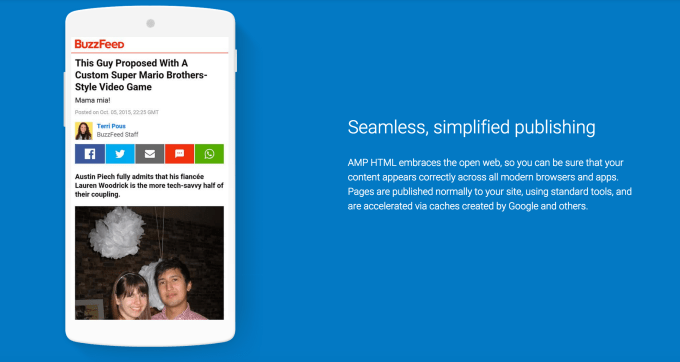 Publishers like Vox Media, La Stampa, BuzzFeed, The Washington Post, Mashable, BBC, The Economist, The Guardian, Huffington Post, Daily Mail, The Guardian, The New York Times, TIME, The Wall Street Journal, Financial Times, Gannett, Hearst, The Telegraph, and others have already indicated their support for AMP. In some cases, these same publishers are also working with Facebook – covering all their bases, so to speak.

Now, Google is expanding its list of publisher names to include R7.com and NZN Group in Brazil; CBS Interactive, AOL, Thrillist, Slate, International Business Times/Newsweek, Al Jazeera America, and The Next Web in the U.S.; El Universal and Milenio in Mexico; The Globe and Mail and Postmedia in Canada; and The Local Media Consortium (LMC), a partnership of 70+ media companies representing 1,600 local newspapers and TV stations.

Meanwhile, the AMP developer community has grown to over 4,500, and over 250 pull requests on the Project’s GitHub page  – contributions of new code, samples, and documentation – have been made, says Google.

We also now have something akin to a launch date for AMP: According to Google, its search engine will begin sending traffic to AMP pages “early next year.”

Until then, you can give AMP pages a test using a live demo. Click here (g.co/ampdemo) from your mobile device, then search for a news term.