As the market for virtual reality technology continues to grow, Apple has made an interesting acquisition that could further its role in the space. TechCrunch has confirmed that Apple has snapped up Faceshift, a startup based in Zurich that has developed technology to create animated avatars and other figures that capture a person’s facial expressions in real time.

There were unconfirmed reports earlier this year of Apple buying Faceshift, but with no definitive proof of the deal, Apple remained mum. In the meantime, we dug up further sources and conclusive links between the companies, and a spokesperson from Apple has today confirmed the acquisition with its customary statement:

From what we understand, several Faceshift employees are now working for Apple now out of Europe.

It’s not clear how Apple intends to use Faceshift’s technology, but there are a number of areas where Faceshift has been demonstrated and is already being used.

In gaming experiences, people can adopt avatars whose faces will alter based on the players’ actual expressions for a more immediate and realistic experience. In film production, the technology can be used to improve the process of animating characters to more closely mimic the actors’ facial movements. And while it’s not something that Faceshift appeared to focus on in its lifetime as a startup, there may also be enterprise applications using facial recognition for identification or security purposes. 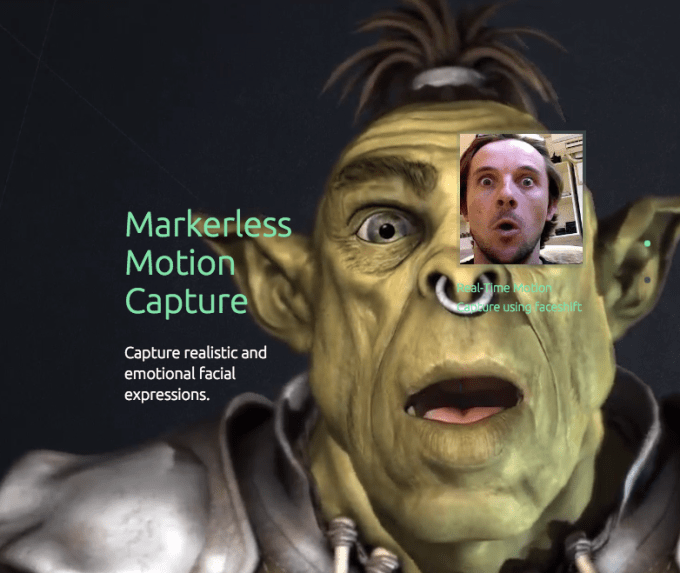 Its main focus, so to speak, was on visual effects in areas like gaming and film. In a world where animation technology can be costly and time-consuming to implement, the startup’s main product was marketed a game changer: “Faceshift studio is a facial motion capture software solution which revolutionizes facial animation, making it possible at every desk,” according to the company.

Even so, the technology is also making an appearance at the highest level of wow: it’s used in the latest Star Wars film to make non-human characters more human-like in their expressions (a glimpse is at the 0:41 mark here and pictured above).

Apple itself already has patents and assets across motion capture, facial recognition and augmented reality, partly by way of three other European acquisitions, respectively PrimeSense, Polar Rose and Metaio. Faceshift could complement and expand Apple’s capabilities in these areas going forward.

Faceshift was originally founded in Zurich by academics Thibaut Weise, Brian Amberg and Sofien Bouaziz as a spinoff from the Computer Graphics and Geometry Laboratory at the École Polytechnique Fédérale de Lausanne in Switzerland. The school originally owned two of Faceshift’s facial animation patents (here and here), which transferred to Faceshift at the end of August of this year, just ahead of Faceshift transferring much of its IP administration to firms that commonly do work for Apple.

Faceshift later added offices on the West Coast headed by film and gaming industry vet Doug Griffin (no longer with Faceshift), and in London. The London office is headed up by Nico Scapel, a visual effects specialist with a long and impressive list of film credits.

Prior to Apple’s acquisition, Faceshift had a web site that offered a demonstration of how it worked, along with some support documentation for developers using it.

You can see a basic archived version of the original site here (via Wayback Machine).

There are also several videos on YouTube showing how Faceshift’s tech worked, including this short video with interviews produced by Intel, whose RealSense 3D camera integrated with the Faceshift SDK: