Google’s popular photo management utility, Google Photos, which was spun out from Google+ this spring and soon grew to 100 million monthly active users who have uploaded some 50 billion photos, is today getting even more useful. At least for Android users! The company says that an updated version of the app will now help users to free up storage space on their mobile devices by offering them the option to bulk delete photos from their phone.

Related to this, a “downgrade” image quality option will also be made available on the web version of Google Photos to give users who are approaching their Google storage limits an easy way to free up space on their Google account, too.

Thanks to Google’s ability to more deeply integrate its own Photos application on its Android platform, the “Free up Space” option is fairly seamless.

On the Settings screen, you simply tap the new “Free up Space” button in order to begin the process of deleting photos from your phone en masse. To avoid accidental taps, Google says the app will ask you again to confirm that you want to delete your photos. 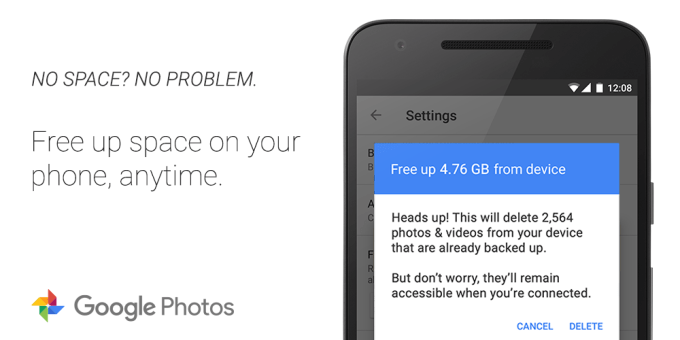 In addition, the feature only deletes those photos that have already been backed up online, so you shouldn’t need to worry about inadvertently deleting your only copy of your images.

To highlight this feature’s arrival, Google Photos is also introducing a new “Assistant” card. Assistants are those automated features in the Photos app that do things for you – like turning your photo sets into animated GIF-like images, for example, or building montages.

The new Assistant will alert users to delete photos when it detects you’re nearing your storage limit on your device, says Google. This feature is only enabled for those who back up photos in Original or High Quality.

Along with the release of the “Free Up Space” option, Android users will also receive a fix that will allow them to delete photos from certain SD-card-enabled devices. (A bug was preventing this from happening, and this has now been addressed, says Google).

The other big update is arriving on Google Photos on the web on Wednesday and is aimed at helping users better control how they’re using their storage space on Google’s cloud service. If you had previously been uploading your photos in “Original” quality (meaning, large files in full resolution), you’ll be able to change that to “High” quality to save space. High-quality files don’t count against your Google storage quota.

If you changed your mind about needing the full-resolution images, you’ll now be able to click a new “Recover Storage” option on the web that will then automatically downgrade your photos for you.

The updates are rolling out now to Google Photos on Android and tomorrow, on the web, but iOS users do not yet have the same “Free up Space” option. That means they’ll have to manually delete their photos following a Google Photos backup for the time being, or use one of the numerous apps aimed at helping you reclaim space on your iPhone. Google tells us, however, that similar features are arriving on iOS soon.

Update: The Assistant card now shows for both high quality and original quality photos. The post has been corrected to reflect this.