One of the most common complaints from iPhone owners today is that they’re running out of space on their phones, and either aren’t quite sure what to do about it, or don’t have time to spend backing up then deleting all the photos, videos, and messages that are weighing down their device. While Apple offers a solution for this with its iCloud service, which is now more affordable than ever with 5 GB for free and then 99 cents per month for another 50 GB, not everyone is aware of the option, or likes the idea of being tied to a monthly subscription.

A pair of newly launched apps – one oddly dubbed “Ice Cream” and another more plainly called “Room for More” – want to address this problem by offering an iCloud alternative that can help users take better advantage of their mobile devices.

The Problem: Low-End iPhones With No Expandable Storage

Any tech enthusiast could have told you that the entry-level 8 GB iPhone was not a good deal. 8 GB is simply not enough space in this day and age, where we use our phones for a variety of tasks, including taking photos and videos, downloading movies, sending media-filled texts to friends, playing games, and more. But while Apple may have ditched the low-end iPhone 5C as it brought out its new devices, the 6s and 6s Plus, its entry-level storage capacity on all its models (5s, 6, 6 Plus, 6s, and 6s Plus) is still a miserly 16 GB.

That, too, is not enough space and can easily have users running up against their storage limits in no time.

Unfortunately, Apple’s own cloud storage and sync solution has a reputation for being too expensive – and it hasn’t made enough of an effort to date to help users transition to iCloud when their phones fill up. Instead, confused users face messages that their phone doesn’t have enough storage space when they try to take a photo. Or, in some cases, they do use iCloud but don’t understand, really, how it works. Or they don’t pay for enough iCloud storage to continue to back up their phones and data, and then face error messages related to failed backups as well. 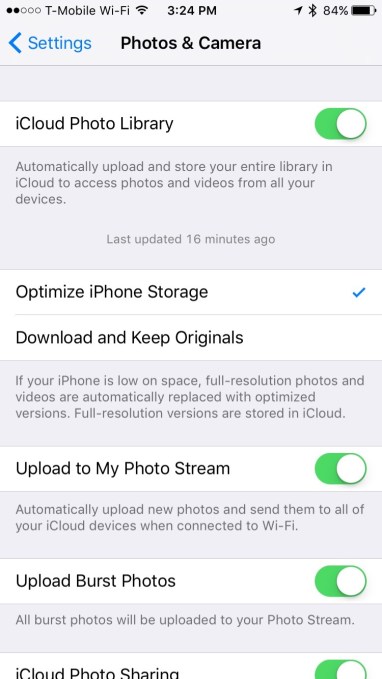 The end result is not necessarily a trip to the Genius Bar or phone call to AppleCare, but a legion of more casual, mainstream iPhone users who just stop using their phones for anything more than the basics. They stop downloading new apps. They might delete a handful of photos to take a few more, but that’s about it. Their phones turn from multi-functional, multimedia machines into plain ol’ communication devices that are good for calls, texts and emails and not much else. (They’re practically Blackberrys. The horror!)

Though it may be hard for the technically-inclined, power user to imagine such a predicament, it’s a common one. And there aren’t a ton of solutions available, beyond paying monthly or annually for a cloud service like iCloud or Dropbox.

Quick Shout Out For Google Photos

Google Photos is worth a mention before dipping into the new startups’ apps. This photo backup and syncing service is probably the standout free solution today because it lets you store an unlimited number of photos and videos in high-quality, though not original, formats, in Google’s cloud. (By high-quality, that’s up to 16 megapixels for photos, and up to 1080p videos. To store originals, you need to pay.) 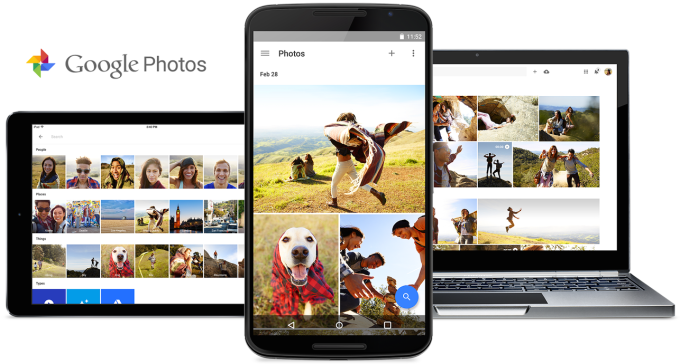 There’s no huge disadvantage with using Google Photos, though people looking for a solution to free up space on their iPhone don’t necessarily know that Google’s Photos app is an option for this. Meanwhile, others may balk at the concept of using a Google service for their own reasons related to the company’s advertising agenda. Or they simply want more control over what’s stored in the cloud in the first place.

That’s where a pair of new apps come in.

Designed by MIT grad, Techstars mentor, author, and former Head of Product at taxi hailing app HAILO, George Berkowski created the “Ice Cream” app after facing the problem of running out of storage space first-hand – right after proposing to his wife and trying to capture the moment. 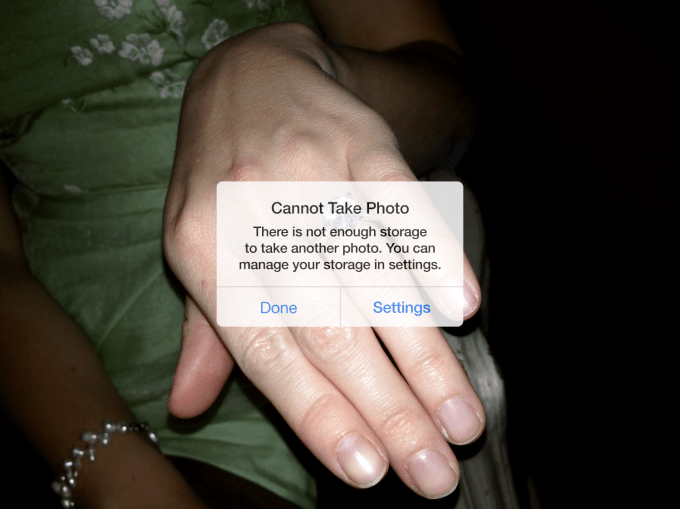 He later researched the issue further, asking around 3,000 people what was the single most annoying thing about their smartphones. Besides running out of battery, the second most popular answer was running out of space. A related research report also found that 40 million people delete photos, videos and apps to make more space on their smartphones every week.

Ice Cream addresses this problem by offering a different way to back up photos to the cloud. The backend is built on Docker, which allows it to operate on any cloud – right now, it’s using Amazon Web Services and Google Cloud. And, Berkowski says, photos are backed up more quickly. While iCloud syncing can initially take hours, Ice Cream will free up space in minutes. 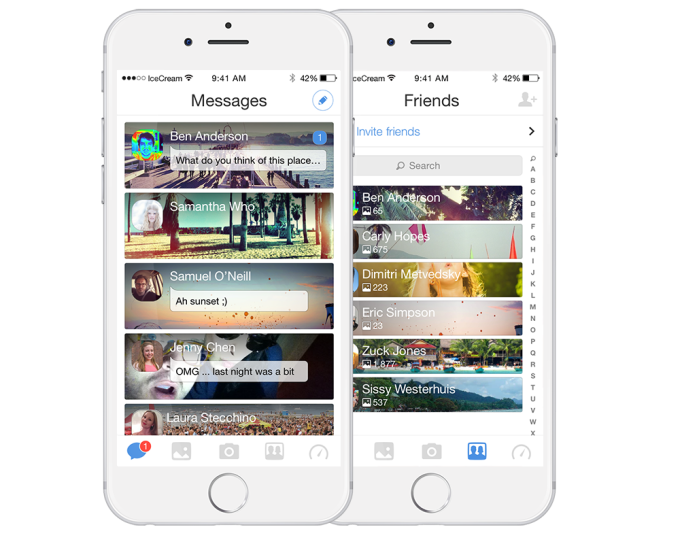 One of the tricks the app uses is that it only frees up space as needed. That is, it doesn’t back up all your photos at once to the cloud, but just a small number.

More importantly, the user interface is designed to be better understood by the “normal” end user. There’s a big “Free Up Space” button that you hit to start the process. (In comparison, iCloud makes you dig in the phone’s settings to turn on an “optimize” option.)

And Ice Cream will also plainly tell you how much space you can free up, as well as how many photos you can still take and which ones are already backed up to the cloud. 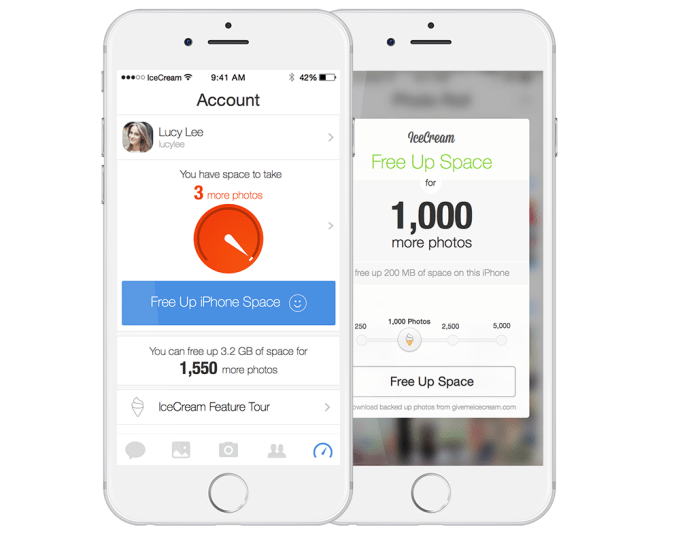 Perhaps best of all is that Ice Cream offers an alternative to an ongoing subscription. Though the app is free during this launch period, it will eventually introduce a business model where users can free up space for 1,000 photos for a one-time payment of $0.99. Depending on your usage and photo library’s size, this could make Ice Cream more expensive than iCloud which gives you 50 GB for 99 cents per month, which is more than affordable.

But psychologically speaking, some users feel more comfortable with a one-time payment rather than an ongoing commitment to a monthly subscription service.

(Ice Cream is still experimenting with prices and doesn’t have a time frame when its pricing will be rolled out, we should note.) 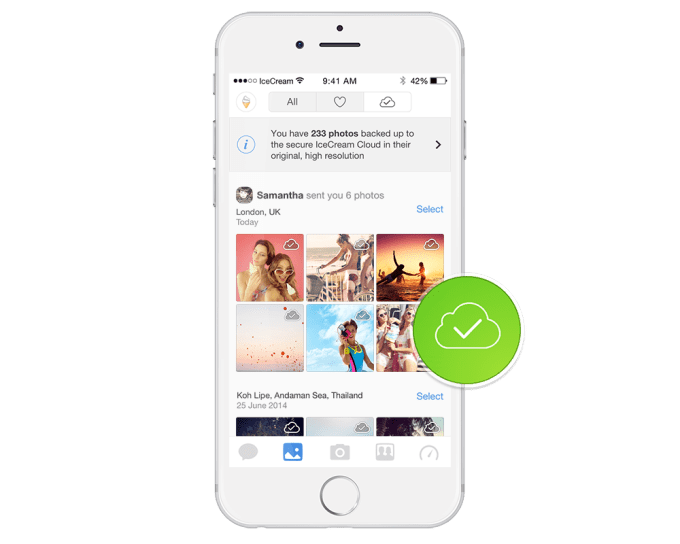 Plus, adds Berkowski, “we are not trying to compete in terms of pricing with iCloud or other solution. We are competing in terms of speed and convenience and one-time payment. If you’re out of space today, iCloud, and every other solution, doesn’t allow you to quickly free up space and keep all your precious photos and videos on your device,” he says.

Photos are backed up in full resolution, and can be re-downloaded to your Camera Roll either individually or in bulk. You can also login via the web to download photos as a .zip file.

The company is currently backed by $700,000 in seed funding, including investment from Riccardo Zacconi, CEO and co-founder of King.

A second new app attacking this same problem is “Room for More,” built by top engineering grad and former user interface designer for Internet Tablets at Nokia, Johan Bilien. The founder joined the team at litl LLC to work on its computer, litl Webbook, back in 2008. He later became engineering lead and then, last year, President.

The Boston-based startup (owned by parent Aquent) has also been exploring the biggest pain points people have with their phones and, like Berkowski, they came across the same problem: limited storage space is still a massive challenge.

“Nearly 6 in 10 people who regularly use their smartphone to take photos or videos have run out of storage space,” says Bilien. “Existing online storage solutions focus on backing things up, or having photos and videos available on multiple devices, but none of them makes it their primary mission to help you reclaim your precious storage space,” he adds.

Room for More instead introduces its own pay-for-what-you-use model, where users pre-pay small amounts, but don’t have to commit to a recurring, monthly or annual subscription. The app only offers 1 GB for free (vs. iCloud’s 5 free GB’s), but then charges 15 cents per GB per month which means you’re only paying for the storage you’re actually using, not some larger tier you may never max out.

The company deducts your payment from a prepaid account over time, as you increase your usage.

Meanwhile, a $99 annual option is available for those who do want an unlimited storage solution instead.

Again, depending on your usage and library size, you could end up paying more or less for storage with Room for More. But it’s also not competing directly on pricing.

Instead, the focus here is user experience. A big “MOVE” button quickly uploads photos and videos to the cloud, in their original resolutions, to free up space on your phone. After the app finishes saving photos and videos to your personal cloud, the Android app will automatically delete them from the phone or tablet while the Apple app prompts the user to delete them. Users can view, share, or retrieve their photos in the app any time.

Another differentiating feature between this and other cloud storage services is that Room for More lets you pick and choose what’s stored in the cloud. The fact that users are explicitly checking off which photos and videos get moved helps them feel like they’re more in control of the cloud storage space they’re using.

The photos and videos are stored on Amazon Web Services, but like Ice Cream, you can re-download photos back to your Camera Roll, or request an archive to be emailed to you from the app, which can the be downloaded as a .zip file. You can also share full-quality photos and videos through private links for use on email, text or social media.

Room for More is available on both iOS and Android as a free download.

Both apps offer their own advantages – Ice Cream is bit more focused on photo-sharing with its user interface, for example, but it also offers more information on how much space you have now and what you can do with it. Room for More feels more utilitarian.

Neither are as easy a solution as Google Photos and its automatic uploading capabilities, nor as well-integrated as Apple’s iCloud, but they may appeal to those who are hesitant to commit to subscription-based pricing or who just want more control over what media goes into the cloud and when.

Both apps are free downloads with the option to buy storage available (or to be available) as in-app purchases.

[Updated 10/14 to clarify how “Room for More” handles deletions.]