The pin may have finally dropped on trademark cases that Pinterest has been chasing in the U.S. and UK. In the U.S., a judge has ruled in favor of a travel startup called Pintrips, in a case where Pinterest was trying to get the startup to cease use of the terms “pin” and “pinning.” Meanwhile, in the UK, location-based mobile directory Free118 won a fight against Pinterest for the right to use the phrase “pinmydeal” for one of the central actions of its service. Both court decisions are embedded below this post.

But although it has had setbacks in these two cases, Pinterest has not ceased fighting others. The U.S. company is still in the middle of a case in Europe over a region-wide trademark on the word “pin”. However, some believe trademark decisions against Pinterest are likely to put an increasing amount of holes in Pinterest’s arguments.

Pinterest has declined to comment on the Free118 case in the UK, but from what we understand there are no plans to appeal the decision reached by the Trademark Office (the deadline for doing so is at the start of November).

“This ruling is based on Pintrips’ ability to convince the court they hadn’t heard of Pinterest in 2011,” a spokesperson said. “While we’re disappointed in that conclusion, it doesn’t have any implications for our marks today or the future.”

Together, the two cases can be seen as a victory for companies that have used or would like to use variations on the word “pin,” but have more recently faced legal pressure from Pinterest when doing so because the social network believes that it causes too much confusion with consumers between its own company and others. Misappropriation of its name has over the years been a thorny issue for Pinterest, where it has actively discouraged companies who work with it from using names that can be seen as variations of its own.

“If you’re creating an app, website or other service designed to be used with Pinterest, give it a distinctive name,” Pinterest writes in its brand guidelines. It’s fine to say the product is for use with Pinterest as long as you pick a distinct brand for your product. Don’t use ‘pin’ or ‘Pinterest’ in the name. Don’t register a domain name containing ‘pin,’ ‘pinterest’ or any misspellings, transliterations or similar variations on Pinterest.” Easier said to partners than completely separate businesses, it seems.

The case in the U.S. puts to rest a years-long battle against Pintrips and its use of the word “pin” in its business as well as in a core feature of its service, a button that invited users to “pin” an event or place to their itineraries. Pinterest was arguing that Pintrips infringed on its trademark rights over use of the term.

Meanwhile, in the UK, the startup that had raised red flags for Pinterest doesn’t even use a variant of the p-word in its name, Free118, but it had come up with an action that involved the word “pin” — Pin as part of its wider business plan as a location-specific provider of promotions from businesses, and then created two variations of how it could present this, hoping that Pinterest would only oppose one (in the end it opposed both): 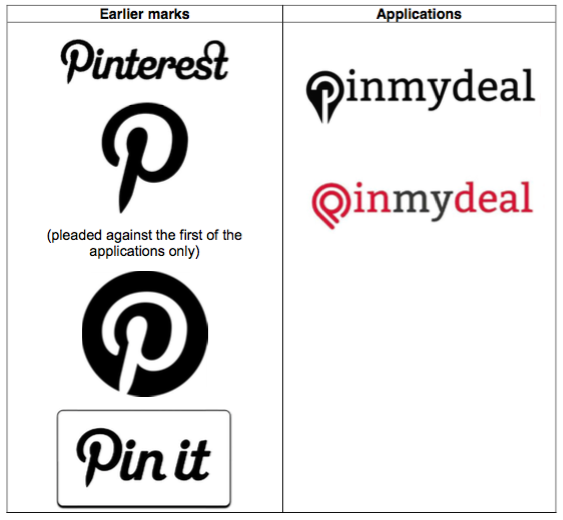 As the UK decision below outlines, the issue with Pinterest claiming infringement over “Pinmydeal” is that the central word in question is just too common — just as common, in fact, as “my” and “deal”:

‘The thrust of Mr Smith’s evidence is that the opponent cannot claim rights in ‘Pin marks’. He exhibits a large number of ‘pin’ icons (Exhibit A) which are used in digital devices, search engines and apps to define location on digital maps. Mr Smith states:

‘“Simplicity is important in the digital environment so I coined a combination figurative and invented mark as PIN (taken from the common noun for a map pin and verb to define location), MY (to define ownership by the trader) and DEAL (a colloquialism for an offer such as a discount, fixed price etc.) with figuration further achieve [sic] by use of a classical balloon logo styles to allude towards a p in the common word pin and used by search engines/operating systems.”’

In the past, we’ve described Pintrips’ legal fight as a “David and Goliath” battle, but if this was a case of a bootstrapped startup standing up to a company that is now valued at $11 billion, Pintrips did bring a pistol to this gunfight: The company retained the services of Kenyon & Kenyon, a firm that once successfully represented AT&T against AOL (owner of TechCrunch) in a trademark dispute over “You’ve Got Mail.”

In this case, decided in the U.S. District Court for the Northern District of California, the court took a decision similar to that in the UK, determining that pinning was too generic an action to be trademarked and protected for the use of Pinterest alone. “Pinterest cannot prohibit other companies from using the word pin to describe that well-known operation, which is exactly how the evidence demonstrates that Pintrips uses the word pin here,” the court wrote in the U.S. decision.

While both cases were lodged against startups that are tiny compared to Pinterest, they are interesting when considering what Pinterest may hope to achieve with its wider ambitions to create trademarks around its name.

In Europe, Kevin Parnham, the patent and trademark attorney who represented Free118, says that some organizations in Germany have opposed Pinterest’s EU-wide “PIN” application and currently the parties are in a cooling-off period, which sometimes leads to a settlement negotiation. “It is possible the [opposing parties] will be paid off so Pinterest will end up with a CTM (European) registered trade mark for ‘pin’,” Parnham notes.

“This is the holy grail for companies like Pinterest.” But he also points out that in Court this is likely to be subject to a “squeeze argument” since ‘pin’ is descriptive “(at least in English)” of pinning something to something, “so if you try to enforce the registration it is invalid.” However, it will mean Pinterest fighting that in each national court and racking up a large amount of court costs — something much easier for Pinterest to handle than the gaggle of smaller companies that it is fighting. (Although not as cut and dried as this past EU case over full ownership of the Pinterest trademark.)

He points out here that one interesting point that may play in European cases is that his client Free118 has just won a case in English, where the tribunal ignored the ‘pin’ family argument put forward by Pinterest. It means that “anyone can use a ‘pin’ mark provided it is not graphically similar to Pinterest’s stylised/block and its corresponding “Pin it” button. “Outside of the UK/English language countries there will still be arguments about how descriptive ‘pin’ is in French, German etc. but it will certainly make life much more difficult for Pinterest in attempting to grab ‘pin’ exclusively to themselves.”