Pinterest raised a $225 million round in October 2013 to help fuel its international expansion, but a recent ruling in Europe could prove to be a hiccup in that strategy. The U.S.-based social networking site has lost a challenge it made to claim the Pinterest trademark in the region, with a European trademark court ruling in favor of the current owner, a London-based social news aggregation startup called Premium Interest and its founder Alex Hearn.

It means that if Pinterest wants to continue to do business in Europe, “Pinterest will have to change their name if they don’t get a licence from him,” according to Adam Morallee, a partner at law firm Mishcon de Reya, which represented Hearn and his company. Hearn also owns similar rights on the Pinterest trademark in other markets such as Australia.

A spokesperson for Pinterest says the company will be fighting the case. “We plan to appeal the recent decision,” he told TechCrunch.

For now, however, the ruling — made by the European Commission’s Office for Harmonization in the Internal Market, Trade Marks and Designs Division — notes that Pinterest’s claim was “rejected in its entirety.”

The decision, which is dated November but was only made public last month, also notes other issues that must feel like frustrating oversights for Pinterest at this point.

For example, Pinterest provided documents to support substantiation of its earlier, non-registered mark. But it did so several months after the OHIM’s submission deadlines had passed, rendering them invalid.

The OHIM also determined that documents that were submitted within deadline only proved that the media was buzzing about Pinterest — but not that the general public in the UK or elsewhere in Europe were — or simply didn’t provide enough detail to show they supported the relevant timeframes.

The ruling — embedded in full below — will mean that Pinterest needs to pay court costs (€300, or $409) but no trademark infringement damages as yet.

Pinterest could still get an opening in the case on an appeal — when it would presumably not miss the submission deadline and provide documents that more clearly proved that it was already a well-enough-known entity in the UK and elsewhere in Europe before January 2012 (when Premium Interest first filed its mark).

Done correctly, such documents could help Pinterest work around the “first to file” rule that was the decider this time around. But there is a catch here, too.

“Pinterest may well appeal but the rules of OHIM are that no new evidence can be put forward,” Morallee tells us. “To win the case they have to show they had rights before Premium Interest in Europe. OHIM refused that on the basis of the evidence [Pinterest] put forward. The fact they are well known in the U.S. is not relevant. What matters is their rights in Europe. And they didn’t have any at the relevant time.”

(Others interpret the rules differently and believe Pinterest may have more scope for appeal than this.)

Pinterest has been a strong defender of different aspects of its branding, from its Pin-it button through to its curvy P logo that looks a bit like the P that social networking app Path uses. It’s also actively discouraged any partners to use any variation of the words “pin” or “pinterest” as puns in their names. So you can imagine that it will not give up its trademark on “Pinterest” across Europe so lightly.

On Premium Interest’s side, Hearn says filing the Pinterest mark was “standard practice to protect intellectual property once we start to work on it.”

“We do have great respect [for] Pinterest Inc’s worldwide rights, but also we respect our rights too!” he says. “There is no mistake their growth has been rapid over the past 18 months, from unknown to megastars, and this has posed the problem in trademark use we have today in the EU and beyond.”

Hearn would not comment directly on questions of whether he would accept a licensing settlement. “I hope there is a route through, as no-one likes good businesses to be impeded! But also it is difficult when there is a rapidly expanding company to waive your protected rights, especially when its your baby,” he says.

What’s ironic is that while Pinterest really has been rapidly growing and gaining traction with consumers, Premium Interest has yet to launch, or use any variation of the “Pinterest” trademark that it owns.

Premium Interest, according to its site, has been “developed by a team of individuals based in London, UK who are dedicated to providing a new way to view news, ranked and selected by the reader, not the editor… The vision is that only the most imaginative news and debates will be captured, giving a wholly different insight on traditional news sourcing.”

Pinterest, he says, will be the name his startup gives to the ranking scores of news in Premium Interest. “We haven’t yet used Pinterest publicly yet mainly due to legal reasons during the opposition proceedings,” he says.

Hearn tells me that he first coined the use of Pinterest in late 2009/2010, when he and colleagues started to work on some of the early experimental algorithms. But it wasn’t until 2011/2012 that the site appeared online. “We have been very busy the past year developing the mobile apps for launch [this year],” he tells me. Premium Interest’s website, Hearn says, is “acting as a test concept site.” For its interface, it happens to use a similar mosaic-style flow to Pinterest’s. 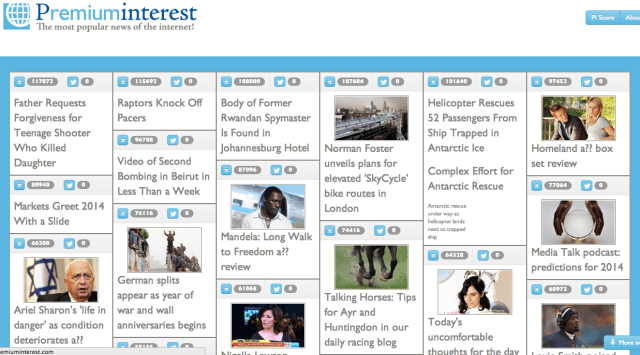 While all this feels like a David and Goliath story (or perhaps the one of a lion with a pesky thorn, depending on what side you take), Hearn himself is not entirely green.

He is a repeat entrepreneur and inventor who is also behind a startup called Kind Consumer. It’s a far cry from social media and software services, though: one of its first products, a nicotine inhalation device to replace cigarettes, is currently under license to BAT and undergoing scientific and clinical testing.