The fallout from YouTube Red, its forthcoming ad-free subscription service, is already underway. Today, the majority of ESPN’s video content has been pulled off of YouTube in the US, as the sports network currently can’t participate in the YouTube Red service due to rights issues surrounding its content.

Though TechCrunch can now confirm that parent company Disney does have a deal with YouTube Red, ESPN itself doesn’t have permission to distribute its videos through a subscription video service like YouTube Red due to other contracts in has in place – including those with various distribution partners.

The change to ESPN’s YouTube channel was initially spotted by Deadspin, which found that most of ESPN’s channels were affected, including its main channel as well as other popular channels like Grantland, First Take, and the NBA on ESPN, for example. In total, 11 of ESPN’s 13 channels are impacted by this issue, while only X-Games and Nacion ESPN are still live.

As Variety notes, the most recent video on ESPN’s main channel is from January 2012, as the majority of ESPN’s more current content  is now gone. It’s unclear if any of ESPN’s pulled content will ever return to YouTube in the US.

ESPN provided a statement, saying “ESPN is not currently part of the Red service. Content previously available on the free YouTube service will be available across ESPN digital properties.” At least that last part is good news for sports fans.

According to a YouTube spokesperson, Disney did sign the YouTube Red agreement, but ESPN’s rights and legal issues preclude being part of YouTube Red at launch. So essentially, because ESPN can’t legally have some of its content in subscription services in the US, it won’t be on Red, and therefore has to take down its own videos in from the ad-supported version of YouTube in the US, though some of its content remains visible in other parts of the world. 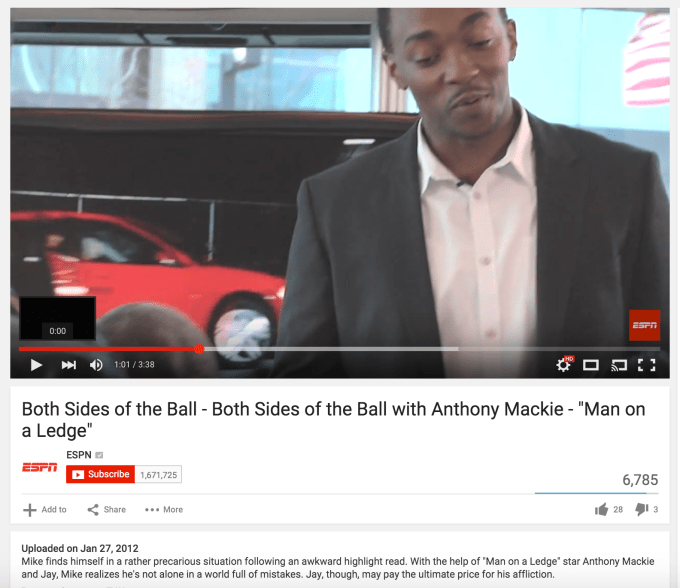 When YouTube was asked earlier this week about its terms related to YouTube Red, and specifically, what would happen if a partnered content creator didn’t agree to participate in the new subscription service, the company downplayed the potential impact, noting that nearly all of its community accepted the new agreement.

“The overwhelming majority of our partners, representing nearly 99% of the content watched on YouTube, have signed up,” a spokesperson told TechCrunch. “Videos of partners who don’t update their terms will be made private, but we remain committed to working closely with these partners with the goal to bring them on board.”

In other words, most creators seem to be happy for the option to have access to another revenue stream outside of advertising or sponsorships, which is how they monetize their YouTube videos today. On YouTube Red, YouTube is reportedly paying out 55 percent of its subscription revenue to the video publishers – the same percentage as the ad revenue it shares. (YouTube earlier said that the “vast majority” of revenue was being paid to creators, but really it’s just barely the majority.)

But YouTube saying creators of 99% of its watched content signed the Red deal is a hollow position because creators  were coerced into the deal with devastating repercussions if they refused. 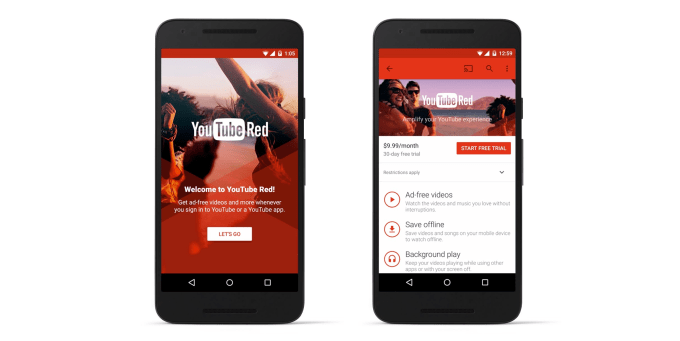 It’s understandable why YouTube wanted to launch a subscription service after watching the success of Netflix and Spotify. Ad revenue per user is relatively small, and both YouTube and creators can earn more per user if they’re $9.99 a month paid subscribers. For many creators, the deal is a good thing. And YouTube deserves credit for not cutting better deals for big media companies than small independent creators.

Still, its argument that the deal is beneficial to most and that YouTube simply couldn’t fathom having any content missing from its subscription service doesn’t justify it forcing creators to sign the Red deal or have their videos removed. Certain creators might have other deals in place, intentions to monetize their videos differently, or qualms with the 55% payout that make them not want to sign on to Red. Penalizing them so harshly by removing their content from the top online video platform still seems like bullying.