Pinterest announced this morning it’s expanding the reach of its “Buyable Pins” – meaning those pins that allow you to make purchases directly on Pinterest – to several more e-commerce platforms, including Bigcommerce, Magento, and IBM Commerce. The company previously supported Buyable Pins with Shopify and Demandware, when the feature first launched earlier this year. With the addition, Pinterest says that thousands of new merchants will be able to offer their products and services to Pinterest’s users.

Alongside the announcement, Pinterest also offered an update on the Buyable Pins program as a whole. In total, there are now 60 million Buyable Pins on Pinterest as of today, the company notes. That’s a sizable number, but the site itself has over 50 billion pins, as of last count. In other words, a lot more content on Pinterest is not shoppable at this point.

In addition to the expansion, several big-name brands are also now coming on board, including Wayfair and Bloomingdale’s, who will be working with the Buyable Pin program directly, as well as Demandware merchants DVF and Steven Alan. Thousands of new Shopify stores are being added, too, says the company.

Buyable Pins, which are a type of pin that’s infused with richer data, including things like the item’s price and options, are meant to be the next logical step beyond product discovery and inspiration – which is what Pinterest is still known for today. Instead, the idea is that merchants can actually convert Pinterest users into customers right on the Pinterest site or mobile app. Users tap on the “Buy” button and can then select the specific product (like color, size, etc.) and then complete their purchase.

The merchant keeps 100 percent of the sales, as Pinterest instead generates revenue via its advertising tools that help merchants and other brands promote their pins across the site.

The pins are also designed to be mobile-friendly, and support easy checkout mechanisms like Apple Pay. This gives Pinterest an advantage against traditional e-commerce websites, many of which still force users to complete lengthy online forms while tapping on their phone’s tiny screens. 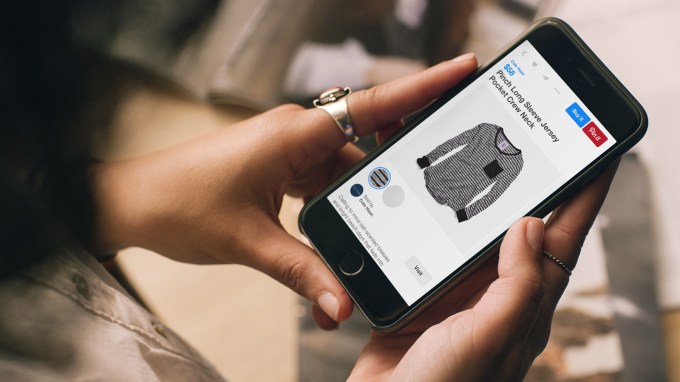 The real question for Pinterest is whether its users want to actually shop the site, or prefer to use it as more of an inspirational tool or online wish list of sorts. But Pinterest argues, citing research from Millward Brown, that it’s the former. That study found that 93 percent of Pinners use Pinterest to plan purchases and 87 percent have bought something because of Pinterest. Now Pinterest wants to change “because of Pinterest” to “via Pinterest.

According to another study, Pinterest said that Buyable Pins were already working for Shopify merchants who saw double the conversion rates compared with other mobile pins.

The company is not the only social network today that’s looking to offer e-commerce features to merchants and other businesses. Facebook launched its own take on the Buy button for the News Feed this summer, and Twitter more recently expanded its own “buy now” buttons to  Bigcommerce, Demandware, and Shopify, as well as Best Buy. However, it’s still early days for all these “social commerce” initiatives – it’s not yet proven that social media can extend itself beyond product marketing to be the primary place that users want to shop, too.