There are Google (Alphabet) moonshots such as its project to hack death/extend human life. And then there is the stuff shooting quite a lot lower than the moon — aka projects which also seem spectacularly unlikely to ultimately deliver a successful product.

The Project Ara moodmusic has been sounding its modular tune from Mountain View for several years now. Google got involved in the project via Motorola back in 2012, retaining the Ara team when it offloaded Motorola Mobility to Lenovo. It produced Ara reference designs for developers in April 2014, and showed off a working prototype at its I/O conference this May — snapping a photo of the audience with a removable camera module.

First public photo from our ARA phone at #io15. Next app install will be @googlephotos to fix lighting. #ProjectAra pic.twitter.com/EvFCQbbHo8

But the latest Ara-shaped notes emanating from Mountain View are sad trombones: The team has revealed that a planned pilot of the tech this year has been delayed.

A spree of tweets in the last few days — the first from the Ara team since May — reveals a 2015 market pilot in Puerto Rico is off. And a pilot will now apparently take place next year (“#yeswearelate”) — somewhere in the U.S (“market pilot re-reoute… recalculating”).

The team blames “lots of iterations” for the delay to the pilot: 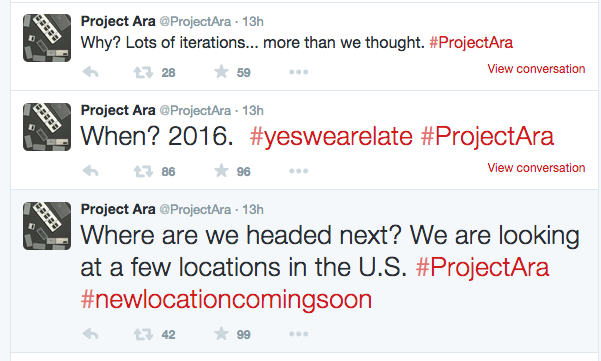 The excuse of ‘lots of iterations’ hardly bodes well for shipping a modular smartphone in human (rather than galactic) timescales. Modular = lots of interchangeable parts. Which means that lots (and lots) of iterations are going to be par for the course — stretching and stretching dev time like a piece of space junk approaching a blackhole.

And so the ‘Ara in development’ tune looks set to sound on. And on. At least until/unless Alphabet maestro Larry Page calls time…

But then, arguably, the principal point with such Alphabet Moodmusic projects is not really about delivering a viable commercial product at all.

It’s about hitting the right notes to project a certain image onto the underlying ad business — which helps make Google (Alphabet) appear more, well, Googley. And less, er, data-sucking-vampire-squid-y. Arguably you could say the same for Google’s Alphabet brand rejiggery too.

There’s another M word for this; it’s called marketing.

In that respect, although Ara remains vapourware, the project continues to deliver for Page and co — with its colorful promises of user customizable hardware and trivial reuse/recycling of smartphone parts.

Delayed dreams remain dreams, after all, and so the moodmusic plays on…

Update: Although Google’s press office failed to respond to questions about why Ara has been delayed, the project’s team has now tweeted out a reason — and it’s apparently down to the planned electromagnetic connections for holding modules together not being fit for purpose.

Aka the prototype splinters into its component pieces if dropped. Ergo, the Ara team is having a rethink on how to attach/detach modules…