Yahoo has been rumored to be working on a revamped messenger app for a while now, and it looks like that new app may be taking its first step into the wild. Yahoo has quietly released the next version of its Yahoo Messenger mobile application, which is available under the name “Yahoo Livetext – Video Messenger” in the Hong Kong iTunes App Store.

The app went live earlier this month, and to bring something a little different to the table, it introduces a unique form of video texting that combines traditional text messages with video that doesn’t include an audio feed. The idea is to offer a more natural form of communication where users can see each other’s reactions in real-time as they participate in conversations.

Contacted for a comment about the app, Yahoo provided this response: “We’re always experimenting with new product experiences that delight our users. We have nothing further to share at this time,” a spokesperson told us, adding his own piece of silent video as punctuation:

Yahoo has been working on a replacement for its mobile messaging application for many years. It scrapped half a dozen versions or so that never emerged from internal testing. But it has also been making some interesting acquisitions to add talent and tech to develop what could become a new messaging product.

Last year’s M&A spree included MessageMe, a team which was set to work on internal Yahoo messaging products. And from what we understand Yahoo has also been working to try to poach people from other messaging and video app businesses to work on this product. Kicksend co-founder Pradeep Elankumaran joined Yahoo six months ago, for instance.

That there’s now a version live on iTunes indicates that what we’re seeing today is likely close to a final product. And the fact that it’s being tucked away on the Hong Kong App Store means that Yahoo was probably hoping to run a public-facing test of the app ahead of a more formal announcement and wider launch.

It’s fair to say that, until now at least, Yahoo had missed opportunities to compete in mobile messaging, despite being one of the early companies to offer instant communication for desktop users.

In the web’s younger years, Yahoo’s Instant Messenger app was one of the top ways web users could chat, along with other apps like MSN Messenger and ICQ, for example.

But as social media emerged and large platforms like Facebook began to dominate the space, Yahoo and other older online messengers lost significant portions of their core audience. That leads to today, where most “instant messaging” happens on smartphones via SMS, iMessage and other popular apps like Facebook Messenger, Facebook-owned Whatsapp, Snapchat, and others. Meanwhile, Yahoo’s own entry in this crowded and growing mobile messaging market was left to stagnate.

With Yahoo Livetext, it’s clear that the company is hoping to differentiate its app, despite being a late arrival to this space, by introducing a twist on traditional texting or video. Instead of simply offering yet another alternative to a smartphone’s built-in mobile messaging app, Yahoo claims that Livetext is “an entirely new way to stay in touch.”

Notes Yahoo, the idea is to turn simple conversations into memorable experiences, while also working to solve the problem of how to better express ourselves by not relying on typing alone:

“The advent of smartphones led a shift towards convenience and speed. We’ve gone from communicating primarily with our voices to using our fingers to text on glass,” reads Livetext’s app description. “But somewhere, along the way we lost the natural flow of conversation. Our solution is to go back to the basics, by putting your words and your friend’s real-time reactions at the center of your interaction. We’ve removed audio from the equation, as it’s rarely convenient in today’s fast-paced world.”

This also seems to play on the exploding popularity of gifs — those silent, short clips that punctuate and permeate so much of our web and social media experience these days, and are of course a mainstay of another Yahoo property, Tumblr.

The free app uses either a Wi-Fi or cellular connection and is focused on one-on-one messaging, not group chats, as some had suspected Yahoo’s messaging re-entry would look.

Unlike semi-competitors like Skype, Viber or FaceTime, Livetext doesn’t (yet?) support video calling. Instead, one user would begin texting a friend and then when the message’s recipient entered the chat session, you would immediately see them. The app also offers user profiles which include a Livetext ID and it can help you find friends based on your address book on your phone. 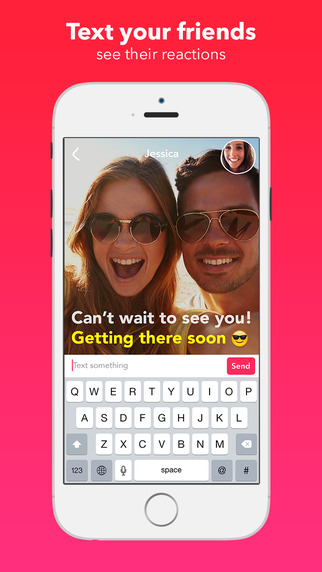 The app is clearly also aimed at younger demographic. Teens and young adults spend a lot of time on their phones and texting, but like most of us, they can’t always take advantage of video calling because they’re in a public place, like a train or ballgame, or somewhere they’re supposed to be quiet, like school.

The Hong Kong App Store launch follows the removal of the older Yahoo Messenger app from iTunes this May, which signalled that a refresh was on the horizon.

“The Messenger app was removed from the appstore [sic] as it has not been updated in quite a long time,” a Yahoo rep noted in a Yahoo Answers forum in response to a question about the app disappearing from the iTunes App Store.

“We would rather our name be related to fully functional new technology, instead of old and outdated apps. Look for an announcement from us about a new Messenger client coming soon.”

We’ve been looking for an Android version of the new app and have found what appear to be help files related to it but not the app itself. We’ll update this story as we learn more.