Music discovery platform Shazam is today rolling out a new feature in partnership with over two dozen artists that will allow Shazam users to see which songs their favorite musicians are listening to on the service. The news comes just ahead of Apple Music’s worldwide debut tomorrow, which will introduce streaming music, radio and other features, including a social network called Connect – a sort of Facebook for musicians that lets them share music, videos and notes with fans.

According to Shazam, the company has signed up over 30 top artists to participate in its new song-sharing feature, including well-known names like Pitbull, Calvin Harris, Maroon 5, Meghan Trainor, Coldplay, Usher, One Direction, Alicia Keys, Shakira, Mariah Carey, Imagine Dragons, Linkin Park, and many others.

Combined, these artists have a total of 600 million-plus Shazam followers, the company notes. Soon after launch, Shazam says it will expand this functionality beyond the initial 30 artists to include hundreds of others from around the world.

The company will also now reveal “Shazam Counts” – the number of times a song has been Shazamed – for the first time ever.

The social networking feature will be made available in the updated versions of the iOS and Android mobile applications, out now. To get started, users will have to follow their favorite artists on the app in order to seeing what they’re “shazaming.” This action will also allow users to be notified of other information, including new singles, new albums and new videos, the company says. 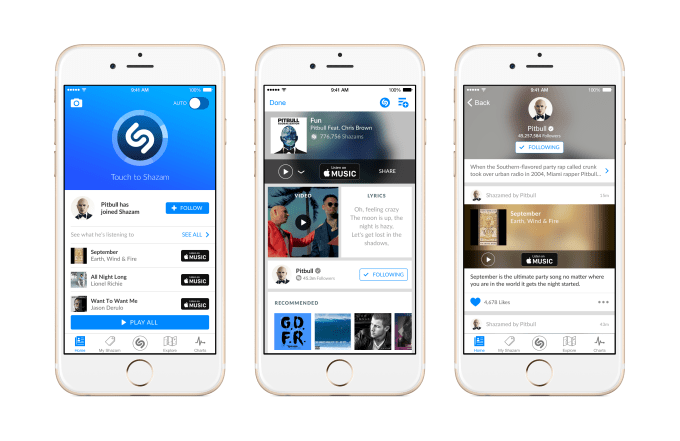 The feature’s launch appears to be in reaction to Apple Music’s upcoming social features, which introduces a way to follow favorite artists – something that’s available on Shazam as well. Artists on Shazam will now have a new page on the service that shows their Shazam discoveries, their top tracks, videos and their follower count. Again, this mirrors what Apple is launching with Connect, where fans will follow artists and then be alerted to new releases, or engage with content like audio, videos, photos, or even text posts.

Of course, Apple Music’s Connect could still be a hit or a miss. This is not the first time Apple has tried to implement a social layer around music, after all – it tried and failed before with its earlier social network called Ping which shut down a few years ago. Apple is hoping that, with Connect, it will be able to own the relationship between a musician and their fans.

But for now it’s unclear if artists will actually take the time to create exclusive content for Connect, or if it will largely include the same sort of posts the artist is already sharing on other social media sites, like Facebook, Twitter or YouTube, for example.

In the meantime, despite Apple Music’s potential reach, Shazam has a slightly differentiated offering by allowing artists it’s working with to share what they’re actually listening to these days. That’s something many artists already like to do – being known as taste makers – and helping unearth new musicians and bands before anyone else.

This new feature also squarely ties into Shazam’s larger goal of being a place to discover new music. The company already offers a number of ways to find new songs you’d like, including music charts, a news feed of sorts, Facebook integration (to see what friends are shazaming), a worldwide map of users’ Shazams, a trending section to see the top tracks or the top tracks by specific regions, and more. With the ability to find and follow artists, get information about their music and the music they like, Shazam is clearly hoping to position itself as a competitor to Apple Music Connect when it comes to music discovery.

That being said, Shazam is also working with Apple Music, as it does with other streaming services like Spotify or Rdio. Fans will be able to listen to the songs artists Shazam by tapping on a new “Listen on Apple Music” button included in the app, the company says.