Apple’s ongoing work to improve its search features got a big boost on mobile today: Apple launched a search API for iOS 9 that will be based around deep linking technology. This will let developers index and link out their apps, making their content discoverable through the native search experience on iOS 9. In other words, you will now be able to search on  your phone not just for apps on there, or for content on the web, but for whatever is within the apps apps you have on your device, through Apple’s main search feature.

On stage at WWDC, Craig Federighi provided an example of how this might work: searching for “potatoes” in the search window leads to recipes from third party app Yummly installed on the device.

The feature will sit alongside a wider upgrade of the search that will let you search for most frequent contacts and apps that you use throughout the day. It’s not clear yet how Apple will prioritise which results will come up at the top of in-app search results; it may be that it, too, will depend on which apps you are using most, rather than content that has been updated most recently.

The technology that Apple is using for this service, deep linking, is one of the more interesting developments in app discovery. It’s an especially important area considering the current app landscape. iTunes now has over 1.5 million apps in the App Store, and the average user has 119 apps downloaded on an iPhone or iPad. In effect, our individual app universes are mimicking the wider web, and so we need better tools to dig into them in a more meaningful way. It’s not clear whether Apple intends to extend the search features into apps that are not installed on our own devices, but that could be a logical progression for its app search down the line.

Deep linking is the same technology that is used by startups like Quixey, DeepLink, Branch and Button to create services indexing and linking to content within native apps. This helps the apps them behave more like indexed pages on the open web. This is used not just for search features, but also also for in-app ads. 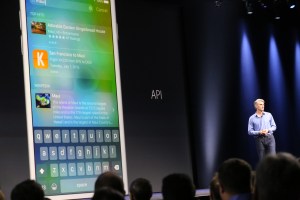 Among larger tech companies, Apple is not the only one adding deep linking into its mobile search features. In April, Google started showing results from Android apps that users didn’t have installed on their phones, which it expanded to iOS users in May. That comes after working on the technology for two years.

Google’s aim is to show users relevant content from apps they have installed, as well as point them to other apps they could download. In Google’s case, it points to these apps within Google Search, or Google’s native mobile application on users’ smartphones, while Apple’s deep linking is actually being baked in to iOS itself.

Yahoo has also been working deep linking features into its own mobile apps.

Before today, Apple offered App Extensions to developers, which did extend deep linking-style functionality and allow apps to effectively communicate with each other for features such as widgets on the Today screen, and to offer photo filters within the iOS Photos app, or for custom keyboards.

Bringing that kind of power to Apple’s native search experience in iOS is not just another useful features to give customers, but also one more feature to lure them away from using Google quite so much, too.

But Google may not be the only one to get less traffic as a result of deep linked search results. Depending how much information you may need, there may be times that you decide not to visit those apps at all after you find what you were looking for.