Photo-sharing site Photobucket has just acquired its second company in a matter of weeks, following its pickup of photo chat app Lasso in March, which was fueled by the recent injection of $3.6 million in new funding. Today, the company will announce it has bought social video platform Milyoni, best known for its development of an interactive card format for digital content called “Madcards,” which are designed to work on mobile devices.

Milyoni, founded in 2009, and backed by $30+ million in outside funding from Oak Investment Partners, ATA Ventures, and Thomvest Ventures, according to CrunchBase, works with entertainment companies, brands and artists, often in the music or movie industries. Its partners today include Universal Music Group, iHeartRadio, MasterCard, Columbia Records, Universal Pictures, Lionsgate, Fender, Monster Energy and Paramount Studios.

The company’s other claims to fame include being the first to launch feature-length films on Facebook, and launching the first pay-per-view concert in 2011. It has also worked with artists like Ziggy Marley and documentary director Kirby Dick, who have used its social video platform for live audience Q&As.

More recently, Milyoni introduced its “Madcards” technology, which allows its clients to increase user engagement by converting YouTube videos and other digital content into mobile-optimized cards that can be customized with videos, links, text, images, polls, trivia and more. The cards allow the clients to tell “multimedia stories,” which can be shared to social networks, as well as via email or text messages. 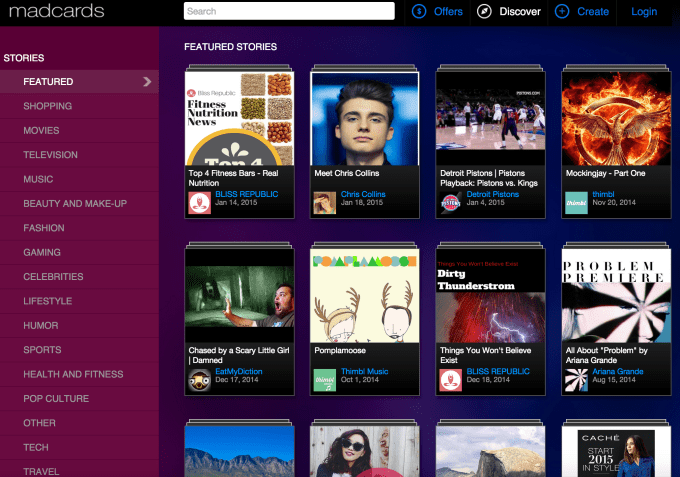 Milyoni CEO John Corpus will now become Photobucket’s Chief Revenue Officer following the deal, and will remain based out of the Milyoni office in Pleasanton, which will serve as Photobucket’s new Bay Area Hub.

Photobucket says the acquisition brings the company mobile talent in product, development and brand sales. Specifically, the idea is that Milyoni clients and brands will be able to tap into Photobucket’s now 60 million monthly uniques in order to engage their fans in a socially engaging way.

The acquisition is one of several new efforts on the part of the aging photo-sharing site to refocus its efforts on mobile as a way to again grow its user base and, potentially, its revenue. Today generates revenue through print, advertising and subscription services, including its “Print Shop” service launched in September 2014, which is now available on both web and, more recently, mobile.

And with its purchase of the Lasso app, Photobucket now has bought itself an entry point into the private photo-sharing and messaging space, which is a growing mobile trend.