Listed on the filing are the company’s prior investors Voyager Capital (Bill McAleer, Tom Huseby), Oak Investment Partners (Ren Riley), Covera Ventures (Steve Coffey), as well as Erik Moreno and David Bagshaw. However, Photobucket declined to confirm who participated in the round and in what capacity, instead only confirming the $3.6 million figure. The company also declined to say what “series” this round was considered, though CrunchBase notes Photobucket’s Series E closed in early 2013, followed by an additional venture round last year.

Photobucket has had a lengthy history in the photo-sharing space, having once been sold to Fox Interactive Media/MySpace for $250 million plus earn-out, followed by a $60 million “fire sale” from MySpace owner News Corp to Ontela in 2009. 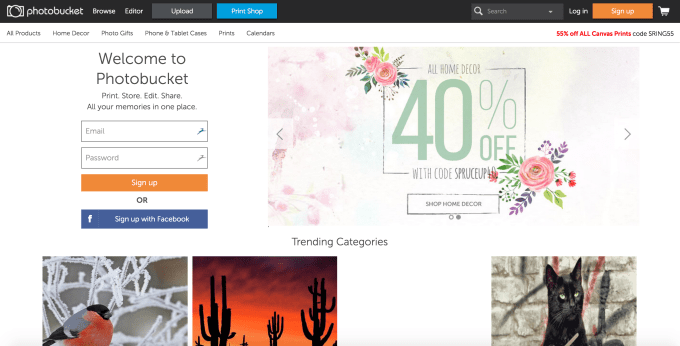 While perhaps no longer as relevant as it was in earlier days, the site still claims to have 100 million users and hosts over 17 billion photos and videos, though it won’t discuss specifics surrounding its current growth or revenue. It’s worth pointing out, however, that user growth appears to be somewhat stagnant – that “100 million” figure was cited as the size of the registered user base back in 2013, for example. And registered users aren’t necessarily active ones, as we all know.

The company today generates revenue through print, advertising and subscription services. It recently has been attempting to return to growth through the launch of its “Print Shop” service in September 2014, which is now available on both web and mobile.

This service, which makes Photobucket something of a competitor to Shutterfly, lets users create personalized prints and photo products, including things like seasonal cards, calendars, canvas prints, home décor and other items. In the next few months, the Print Shop will also offer a premium, lay-flat photo book which will be able to be printed from mobile and picked up the same-day at Walgreens.

According to Kate Hare, Photobucket’s chief product and marketing officer (who was able to be reached for comment while CEO Tom Munro was traveling), the Print Shop and in particular its move to mobile is helping the company find new footing. “We saw tremendous growth, about 10x in revenue year-over-year from 2013,” she notes, referring to the printing service. “So far we are seeing about 10 percent of print orders coming from mobile and expect that to become a larger percentage during the year.”

In other words, while Photobucket may be challenged with growing its user base, it’s figuring out how to extract more money from its existing users.

The new funding will serve two purposes, we understand. One is to expand the Photobucket Print Shop with new products to appeal to a broader user base. But the company is also doubling down on its mobile investments. Photobucket is poised to announce some new acquisitions, one of which is being announced as soon as next week. The company is interested in expanding its print offering around mobile, but also its overall mobile offering in the area of private group sharing. The forthcoming acquisition will aid in that effort.

“We’ve proven that print works and this investment is to continue to expand on print and group photos on mobile,” says Hare.

Photobucket is currently a team of 60 and also plans to grow its headcount with the new funding.