Due to Android’s sizable market share, Google Play apps have historically led iOS apps in terms of the number of downloads, while iOS apps have consistently beat out Google Play apps in revenue. But according to new data out this morning from app store analytics firm App Annie, that gap is still widening – in a large part due to iOS’s growth in China. As of Q1 2015, iOS App Store worldwide revenue was about 70% higher than on Google Play, up from 60% in Q3 2014, the report notes.

China’s importance to the app industry cannot be understated. China has, for the first time since App Annie has been measuring iOS downloads by country (July 2010), surpassed the U.S. in quarterly iOS downloads in the first quarter of 2015.

This change should not be all that surprising, given that recent reports of record-breaking iPhone sales in China. In urban areas, Apple accounted for 25% of smartphone sales in Q1 2015, according to Kantar’s data. And Apple had previously said that China had accounted for $16 billion in sales in the market, while its mobile operating system grew year-over-year at the expense of Android. More importantly, perhaps, the number of first-time smartphone buyers in China who are selecting iPhone is still increasing.

The iOS surge in China is, in part, likely related to the increased sales of the bigger-screened iPhone 6 and 6 Plus devices in the Chinese market, as demand for larger screens is particularly high in Asia, says App Annie. For comparison’s sake, in Q4 2104, those phones with screen sizes between 5 and 7 inches were roughly 60% of total smartphone shipments in China, versus 40% worldwide and in the U.S.

In terms downloads by category, Chinese iOS users preferred Games and Photo & Video apps, including those like Tencent’s Pitu, which became one of the most popular apps in the quarter, thanks to its focus on features that appeal to its local user base, like its beauty, make-up and cosplay filters. Other apps like IN and Fotoplace also did well during this time.

However, though downloads in China are soaring, the U.S. still tops that market in terms of revenue, App Annie says. 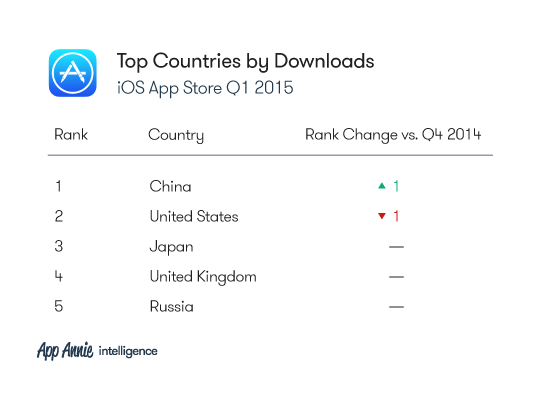 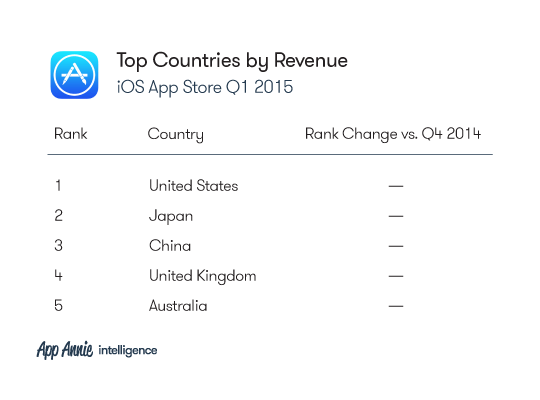 Meanwhile, Google Play downloads increased by 70% during the same time frame of Q3 2014 to Q1 2015. These increases were attributed to Android’s growth in emerging markets, especially places like Mexico, Turkey and Brazil. As new, first-time smartphone owners buy Android devices, download volume soars in these markets.

Mexico, in particular, made significant gains in Q1, overtaking what App Annie refers to as an “app store superpower” and a “stronghold for OEMs,” South Korea which is now out of the top five countries by Google Play downloads. During Q1 2015, the Games and Tools categories saw a big lift in Mexico, the latter which features a range of apps from security apps to keyboard replacements and more. The country is now ranked #5, following the U.S., Brazil, India, and Russia by Google Play downloads. 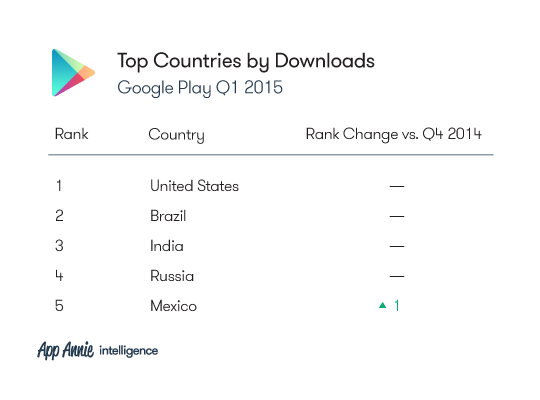 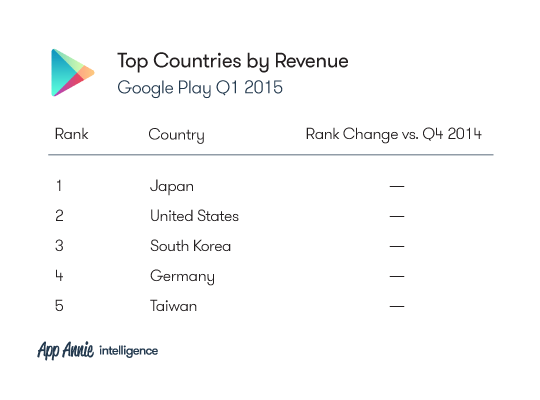 The growth in downloads is not only due to overall smartphone growth, but in particular Android’s traction in that country. Android’s operating system is quite popular in Mexico, with 85% of the smartphone installed base according to IDC, and 29 million smartphone users in 2014 (or 24% of Mexico’s population), per eMarketer. By 2018, it’s expected that smartphone ownership will grow to 50 million here, which means that Mexico’s growth in terms of app downloads will grow as well.

Meanwhile, the countries leading in Google Play revenue include Japan, the U.S., South Korea, Germany and Taiwan – a very different list than those for downloads. The same lists on iOS, however, are more similar. By downloads, it’s China, then the U.S., Japan, the U.K, then Russia. And by revenue, the U.S. beats out Japan, China, the U.K. and Australia.

App Annie also spotted another change in Q1 related to what apps perform well, by way of revenue, on Google Play. This past quarter, Education apps surged to overtake the Entertainment category, and now rank #2 behind Games. Recently popular were a number of language learning apps like Babble and Rosetta Course, as well as brain-training apps like Lumosity and NeuroNation. 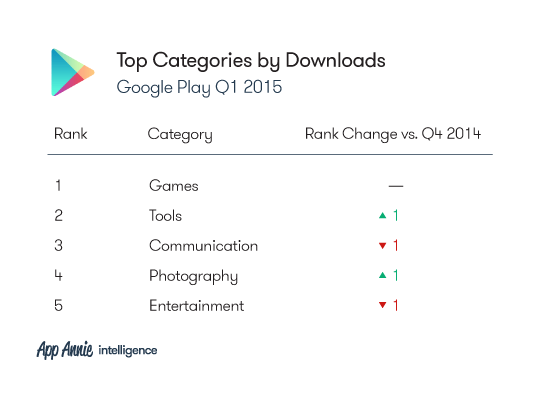