Apple’s continued progress in China saw the company record one-quarter of smartphone sales in urban areas of the world’s largest smartphone market for the first time, according to a new figures from Kantar. China aside, Apple saw significant growth across Europe and the U.S..

It’s well documented that Apple had a huge last quarter in China. The U.S. firm’s revenue jumped 70 percent year-on-year to $16 billion, while Canalys claimed it led smartphone shipments in the country for the first time. Kantar, which generates its figures by canvassing a global panel with audiences of ‘tens of thousands’ in each country, claims Apple’s largest iPhones to date outsold the competition between November 2014 and January 2015.

“In urban China, Apple’s iPhone 6 was the best selling phone in the three months ending in January with a share of 9.5 percent”, said Kantar’s Tamsin Timpson.

Xiaomi, which reportedly overtook Samsung to lead China’s smartphone market in 2014, also fared well. Its Redmi Note, a large screen version of its entry-level device, took second place with 8.9 percent of sales during that period, according to Kantar’s data.

Xiaomi’s devices are considerably more affordable than the iPhone — its Redmi series is around $150 unlocked, its flagship Mi family is approximately $300; an iPhone 6 is upwards of $650 — yet Kantar said Xiaomi maintained a slim 2.2 percent marketshare lead over Apple for smartphone sales.

Kantar predicted back in December that Apple was on course for a bumper quarter, and, while the U.S. firm made its most striking progress in China, the research firm’s newest data suggests it made gains in practically every country in the world.

Its share of smartphone sales in the U.S. reached 43 percent, that’s up 3.6 percent on the previous year. Android devices together accounted for 52 percent of sales, down 3.1 percent year-on-year.

Europe as a whole saw the same upwards trend for Apple. Android devices accounted for 2.2 percent less of all sales — overall 67.2 percent — while iOS’ share of the pie grew 3.2 percent year-on-year to reach 21.9 percent.

These effects were most extreme in the UK, where iOS market share leapt by 11.4 percent year-on-year to reach 40.1 percent, Android maintained a lead on 51.5 percent despite its marketshare declining by 7.7 percent.

Kantar said Samsung’s Galaxy S5 was the second highest selling smartphone during the month period, despite “an improved performance by Motorola and HTC”. Ultimately, though, the Galaxy S5’s 8 percent share of sales was not even half of the iPhone’s in the UK, which accounted for 17.6 percent.

Indeed, Apple’s device was the top seller in France, Germany, Italy and Japan, although Android topped iOS in every market Kantar covered except Japan — where, interestingly, Android manufacturers actually made a 5.8 percent marketshare gain over the past year, while Apple’s share declined 7.3 percent. 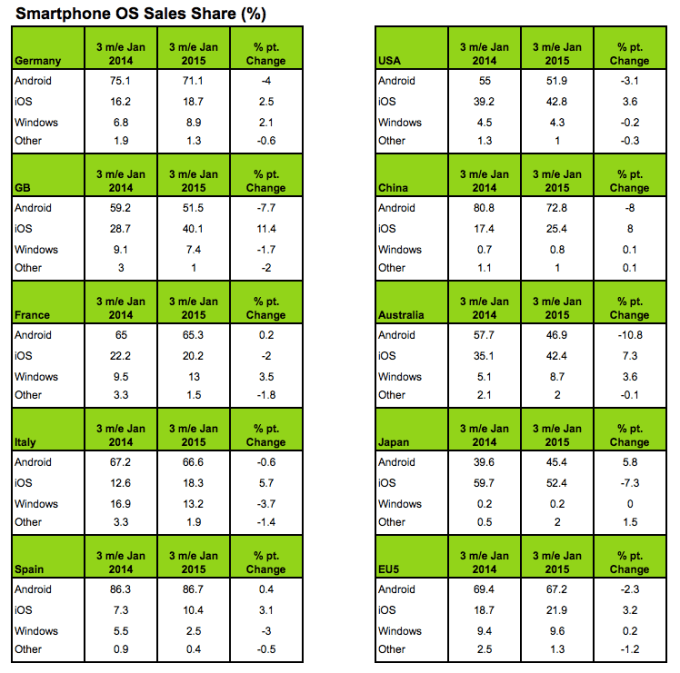 The iPhone Is Stronger Than Ever

Much of this data can be attributed to launch timings from Apple and Samsung. Apple’s new phones tend to launch in the final quarter, while Samsung — which unveiled the Galaxy S6 and Galaxy S6 Note this week — generally releases its Galaxy S series in the second quarter. (Its Note phablet series is released closer to the iPhone.)

That cycle pits a new iPhone against Samsung’s nine-month-old flagship, but this year there’s a difference. Apple’s new iPhone 6 and iPhone 6 Plus are outselling the iPhone 5s at the same period of life in significant quantity across the world’s most important mobile markets.

Samsung has dispensed with many of its traditional features for its new Galaxy S6 phones — swapping out waterproofing and replaceable batteries for a metallic body and sleeker design — and it remains to be seen how consumers will react. Short of these fairly sweeping aesthetic changes, it is unclear exactly what the Korean firm can do to battle Apple’s growing position in the higher end of the smartphone market. More telling will be how sales develop once the Galaxy S6 and S6 Edge are in the market, and as the newness of the iPhone 6 and 6 Plus wears down.

It isn’t just marketshare where Apple is on the ascendency, it is dominating the mobile market on profit too. A Strategy Analytics report issued last month suggested that the Cupertino-based firm accounted for 89 percent of all smartphone profits in Q4 2014 — its share equated to $18.8 billion, with Android taking just 11 percent, around $2.4 billion.