It appears that Dropbox is bringing back HackPad, the collaborative documents service the company acquired a year ago. The Y Combinator-backed startup had grown to become a popular tool for taking quick notes at conferences, events, as well as in the classroom, due to its simple design, ease of use, and real-time nature. Now, a service called Composer, which looks remarkably like HackPad, has appeared.

The project was first spotted by a user on Product Hunt, the site that features daily round-ups of the best products based on votes from its online community. Today, SeatGeek product guy Adam Waxman posted a link to Composer on the site, but others were quick to reply that they were unable to access the service for themselves.

The app is hosted on the Dropbox.com domain, and the name refers to an internal project underway at Dropbox, it seems. The project first requests authentication with your Dropbox account, so it can access your files and folders.

Though most could get through the initial steps of authenticating with Composer, you’re then shown an error message that reads: “Sorry, you’re not allowed to use Notes right now.”

Alongside the message, it instructs you to email feedback@dropbox.com if you believe the message was in error. 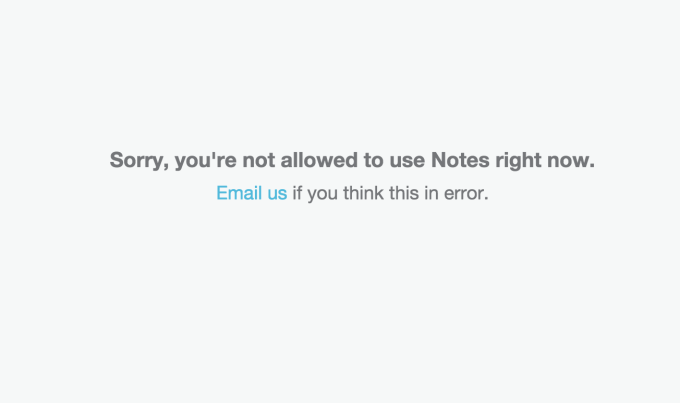 However, one Product Hunt user, Maggie Bignell of Pocket, who also previously used HackPad prior to its acquisition, was able to log in to Composer.

She says the site offers a clean note-taking experience, much like Evernote on the web, and allows for collaborative note-taking. Composer users can add tasks, Dropbox files, and tables all in line with their notes, Bignell explains, having now tried the product herself.

Overall, it’s a lot like what HackPad had offered in the past, with the obvious addition of Dropbox integration. While the app currently doesn’t have as many bells and whistles as something like Evernote (which frankly has been heading towards overkill with new, “smart” features like “Context,” for example), Composer could definitely play a valuable role for those who already use Dropbox as their preferred cloud storage service. It would make the most sense for those who want a way to more easily add files to Dropbox, without having to first take notes in a word processor then upload that file to the cloud.

The addition also plays into Dropbox’s larger plans to move into the online collaboration space, something that other acquisitions, including that of a workplace chat solution called Zulip, also address.

Dropbox declined to comment on the record about Project Composer, but says it will have more information on the product soon.