Facebook on Tuesday announced the addition of a new feature for Facebook Groups designed to make it easier for members of a “For Sale” group to list their items. The new “Sell” feature, which is now starting to roll out globally to more groups, will allow members to create a post where you can add a description of the item for sale, set a price and set a pick-up or delivery location.

The social network today already hosts tens of millions of groups based around a variety of interests, and “For Sale” groups are one of the most popular categories. In these groups, members use Facebook as an alternative to something like Craigslist for local selling, or as an alternative to eBay for selling collectibles or other items of broad interest, like books or electronics.

Currently, members in these “For Sale” groups generally post photos and text descriptions of their items, but the addition of the “Sell” feature will make filling out the necessary information a bit more structured than before. That will go a long way to help out group admins, who often have to remind members that they’re required to list a price, for example, or that they need to specify their general location or neighborhood.

Fellow group members will also benefit from the addition, as they’ll no longer need to comment or message the item’s owner in order to get basic information about the listing, which can be the case today when sellers forget to add these important details.

The problem with the older system is that even these sorts of exploratory comments – the requests for information – can cause the old post to jump up to the top of the Groups page, overshadowing newer listings. It’s also frustrating for members who may want to purchase items but need to know if the item is nearby, or if it’s only available for pick-up, not delivery. 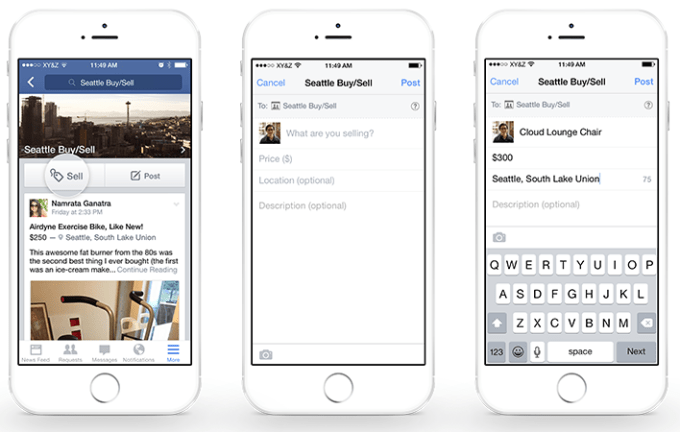 In addition, with the new enhancements, sellers will now be able to mark their posts as “Available” or “Sold,” which will help keep groups and their members better informed about which items are for sale and which should be removed. Again, this sort of item management was something that group members were already doing – often just typing in “sold” in the comments section to alert an admin, or deleting the post as need be. But now there’s a more official means to designate items as sold.

Sellers will also be able to see their catalog of previously sold items by using this feature, Facebook notes. This aids individuals like local artisans who sell their items to friends and other community members using Facebook’s Groups, as is often the case with many women-owned, home-based businesses which are a popular sub-category of Facebook’s “For Sale” groups.

The new “Sell” feature was previously spotted during pilot testing back in December, and the company then confirmed the feature was in the works in select Facebook Groups. Now the feature is rolling out globally to more Groups on the web, iOS and Android, though Facebook says it will happen slowly over the “coming months.”

Group admins can opt to participate in trying the feature first by nominating their Group here.

Unfortunately, for now at least, the option for listing items for sale will not be rolled out further to public Pages, for example, which is where a lot of more professional selling takes place today from a number of e-commerce retailers of varying sizes.

And while the “Sell” feature adds more structure to these sorts of Groups on Facebook, the Groups product still needs a number of improvements. Facebook doesn’t yet make it easier for buyers to actually locate items of interest on mobile. In fact, doing a search across a given Group for a particular item, like a “sectional sofa” or “lawnmower,” for instance, isn’t possible from Facebook’s newly launched mobile apps for Groups – it’s only available on the web.

Plus, getting in touch with members who are doing the selling is still a challenge, as private messages to sellers inexplicably default to users’ “Other” Inbox on Facebook, which isn’t available within Facebook Messenger, and is fairly difficult to get to from mobile period. Still, that Facebook Groups, and in particular these For Sale groups, have grown to become so popular despite these issues, is a testament to how powerful Facebook’s platform is for connecting people.

Facebook says that it will continue adding more features that will enhance these For Sale Groups in the months ahead that will make it easier for members to connect with each other, browse and search.