About once a week, if not more, I find myself typing these words or something similar on Facebook: “I just PM’d you, check your ‘Other’ inbox.” Or, “sorry, I’m on mobile, I can’t get to the ‘Other’ inbox right now.” Or sometimes, just “bump.”

If any of these phrases sound familiar, you’re probably also a member of several Facebook Groups like I am.

Over the years, Facebook’s Groups product has evolved beyond being a private place for a few friends to chat outside of a traditional Facebook post and comment thread scenario. Instead, today’s Facebook Groups section is a busy, semi-public area on Facebook’s network which resembles a Facebook-flavored Craigslist competitor…or a Meetup competitor…or a Nextdoor competitor, depending on your use case. Here, users are busy selling on virtual yard sales, networking around topics of interest (health, parenting, politics, hobbies, etc.), helping each other find work, chatting with neighbors, and more. 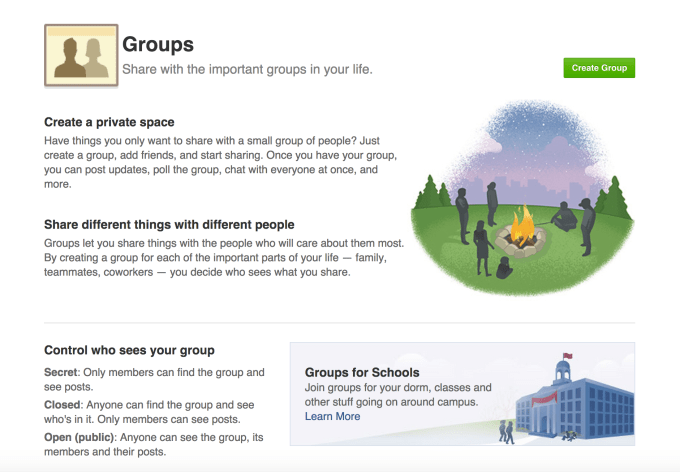 According to data shared on Facebook’s homepage, the Groups product, launched back in fall 2004, has over 500 million users. Third-party sources claim there are hundreds of millions of Groups on Facebook, and these communities continue to grow.

Being involved with Facebook Groups sometimes feels like you’re on a whole different social network. In Groups, Facebook users are establishing connections with people outside of their personal “social graph” of friends, family and colleagues, and are more broadly connecting with the community at large, whether that’s others in their own neighborhood, with people city-wide, or with those who share your same beliefs or interests.

Having largely ignored Facebook Groups for some time outside of a few one-off use cases, I became a more active participant this year after some gentle prompting from Facebook in the sidebar of my neighborhood’s group. The “Suggested Groups” module that Facebook rolled out last fall on mobile recommended other groups I might like – and noted which of my friends had already joined. I finally took note of this section and started joining more and more groups.

As of today, I regularly follow over half a dozen local “yard sale”-type groups where members are offering up everything from secondhand clothes and kids’ toys to furniture, appliances and even vehicles. I’m a member of a few special interest groups focused around who am I outside of work (e.g., a parent, a bargain hunter, etc.) as well as subjects I like to track, if not actively discuss. 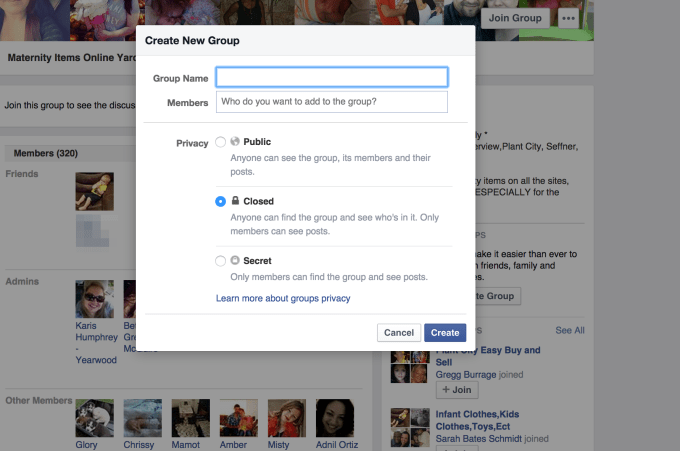 To stay on top of the most recent posts in all these groups, you have to click on each of them individually from the Facebook sidebar navigation on either web or mobile, and then scroll through the new activity, which is like scrolling through a News Feed.

The problem with participating in Facebook Groups today is that it can be time-consuming and frustrating to do so. After you join, say, around a half-dozen groups or more, you stop being able to keep up. It would be like trying to track all of Craigslist by clicking around each section daily. There’s so much happening, that you become reliant on Facebook’s News Feed algorithm to surface the posts from your favorite groups for you.

Unfortunately, that’s a bad idea. By the time Facebook has determined a post in a group to be buzzy enough to interest you, it’s often information that arrives too late. I can’t tell you how many times I’ve kicked myself for missing a great deal on a piece of furniture or other item that was quickly snatched up on a local yard sale group, or saw a post about a local community event pop up after the event had already wrapped.

In many cases, Group activity is something you want to more actively watch – especially if it’s related to something timely – like information about new job openings, good deals or sales, a neighbor’s report of criminal activity a few doors down, a big wreck that’s causing road closures or re-routing traffic, and more. 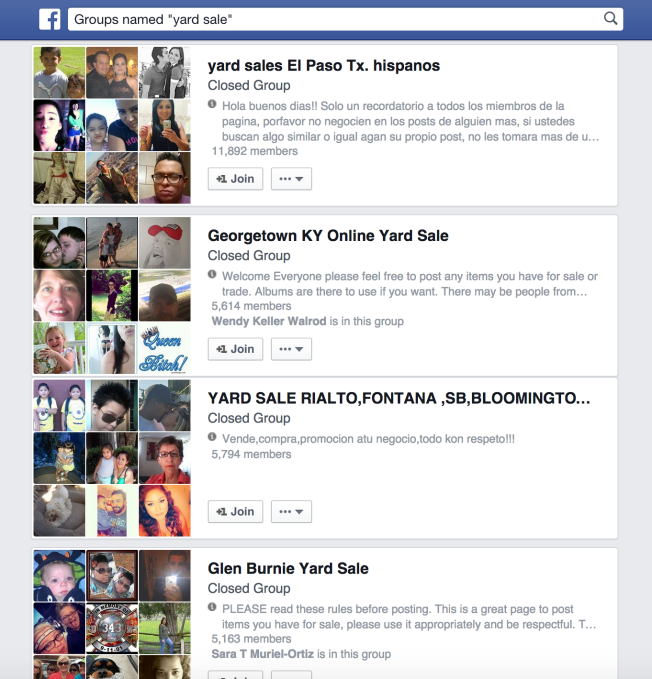 But the interface on Facebook today isn’t ideal for tracking your groups easily, whether you’re on either web or mobile.

A dedicated mobile app for Groups would be better. If I could build one for myself, I’d make it so that I could organize groups into categories – that way I could pop into one section to track my favorite local yard sales separately from the mommy and kiddie groups, or the bargain hunter groups, or those related to technology news and startups. (Yes, I’m in a few of those too!)

I’d also like to configure smarter, and more personalized notifications for my groups. Sometimes, after I view a post, I want the option mark it as read, and not be notified about additional comments. Other times, I’d like to track the post’s changes and comments. This should not a group-wide setting, but something I could enable on a per-item basis.

In addition, if a post in a group about what’s happening around town contained a specific date and time, it would be great if Facebook’s clever algorithms could turn that into a reminder or event I could add to my Facebook calendar.

And why can’t the search feature for groups be turned into an alerts function? If I happened to be looking for a great, but kind of cheap new coffee table (ahem), it would be super useful to get a push notification when the keywords “coffee table” were mentioned on the groups I track.

And most importantly – and I can’t stress this enough –  a dedicated Groups app should have a functional private messaging inbox. Or even better, Facebook should stop putting communications in between Groups members into the “Other” inbox. 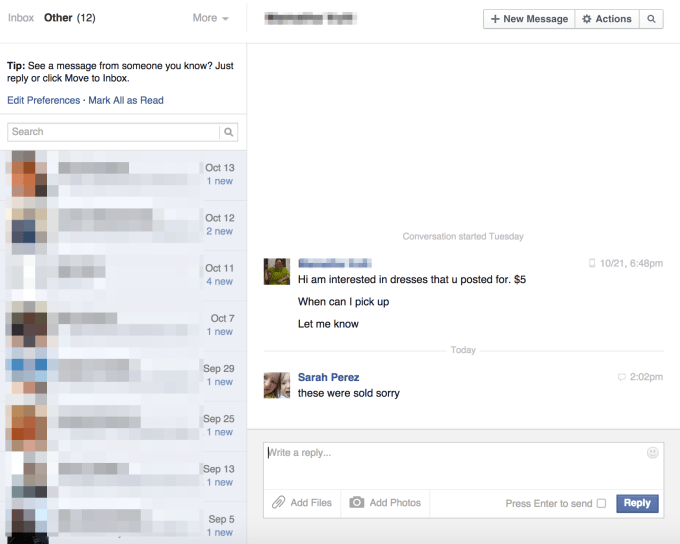 In case you’re unaware, the “Other” inbox was created to help Facebook users cut down on spam and other unsolicited messages they’d receive from people who are not their Facebook friends. It arose from Facebook’s failed attempt to turn itself into an email platform. When you launch the Messages section on Facebook.com, the “Other” inbox appears grayed out – an easy-to-miss home for all the unimportant messages you’ll probably just ignore forever.

But when you’re communicating with Groups members – like to share a home address related to an item on a yard sale, for example, or to arrange a spot to meetup, or to share personal information like an email address or phone number, or for a variety of other reasons that regularly come up – those messages by default go into this “Other” inbox.

Why? Because the people on the receiving end of those communications are not typically a Facebook friend.

The issue with this process is that Facebook’s mobile Messenger app – the one it’s now forcing users to download – doesn’t support the “Other” inbox. In fact, there’s really no good way to access the Other inbox from your mobile phone, outside of a janky workaround for pulling it up on the web. It’s beyond annoying. 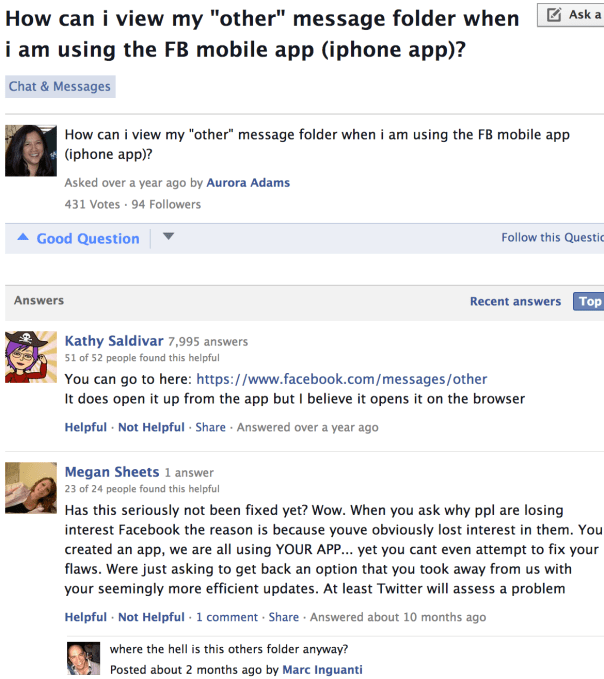 (Note that the “Groups” section in the Messenger app today is not about Facebook Groups – it’s for sending out a message to a “group” of your Facebook friends. In other words, same name, entirely different function.)

So to sum up: the thriving, semi-public Facebook network that is Facebook Groups is difficult to track on web and mobile due to all the clicking around you have to do, prevents private communications between members from being easily accessed, and offers no help for those who want to participate in a larger number of groups with smart tools for group organization and personalized notifications.

And yet, instead of rolling out a product that would solve a problem with a significantly sized, heavily trafficked portion of Facebook’s site, the company seems to be more obsessed with not missing out on whatever the next new social networking craze may be. When it can’t set fire to billions to acquire its way further in to mobile messaging, it clones popular apps which often then flop even when they’re well-designed. See for example, Poke, (a would-be Snapchat); Slingshot or Bolt (a Taptalk clone); Paper (similar to Flipboard); or now, Rooms (inspired by Secret and Slack). And Facebook is currently trying to clone a private photo-sharing app that looks like Cluster, we’ve heard.

Meanwhile, Facebook has proven that when it pushes a dedicated product related to a particular feature or function on its existing site – as it did with the forced download of the Messenger app, which is still in the top of the charts on the App Store – it can establish a solid mobile foothold with an app that is not Facebook proper. 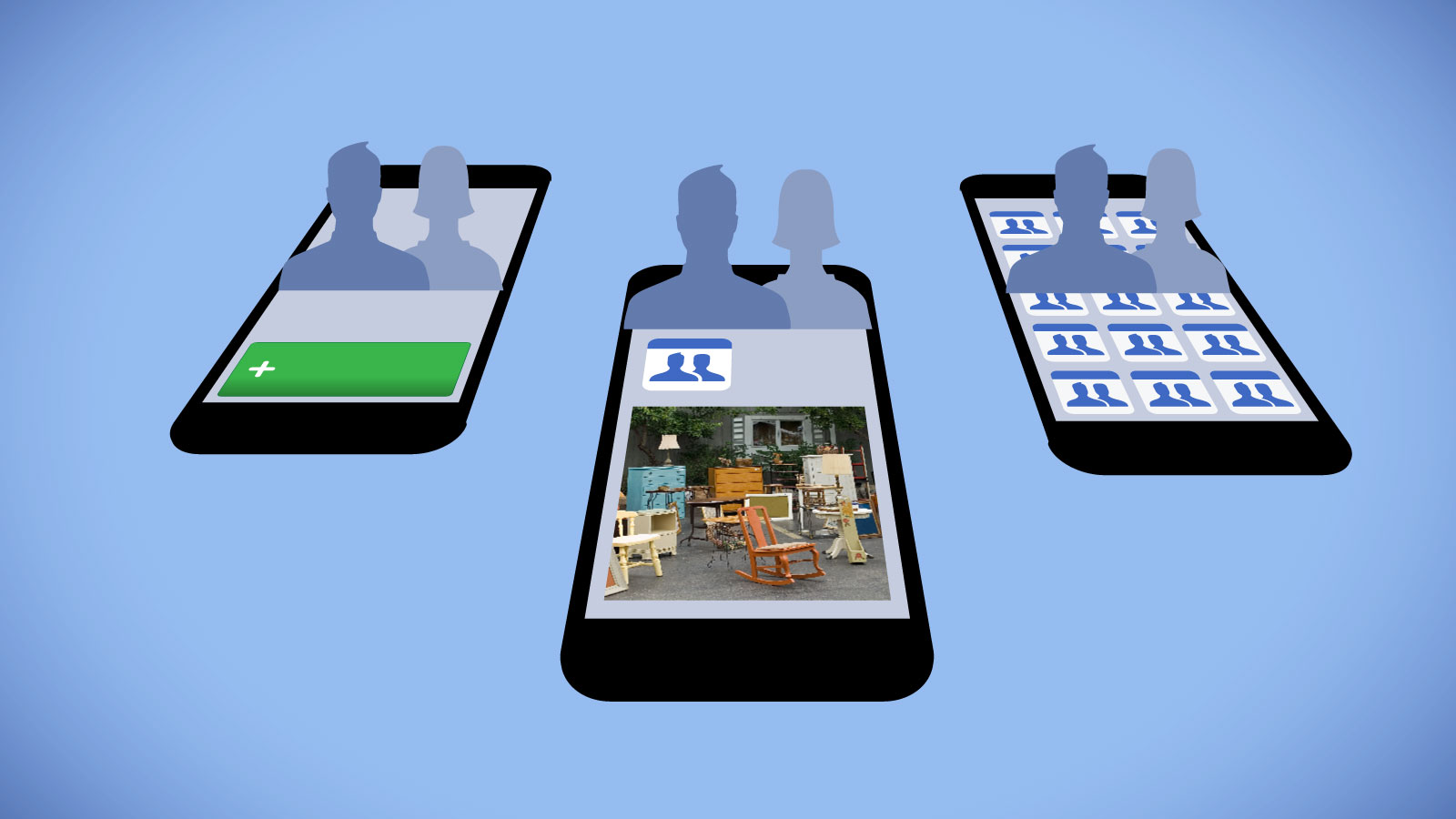 Word was that Facebook would break out other portions of its website into dedicated apps like it did with Messenger, in order to launch standalone experiences for Groups and Events. This could still be happening. But where are these already? Why are we getting a bunch of me-too apps instead of something hundreds of millions of Facebook’s users already use, and would likely be thrilled to see improved on mobile?

That’s not to say that these newcomer Facebook social apps won’t eventually hit it big, or aren’t thoughtfully envisioned or well-designed – they are. But they aren’t currently solving the ongoing challenges a large number of Facebook users encounter today – they’re trying to create new and different ways for people to network.

But Facebook itself is already facilitating new kinds of social networks through Events and Groups and communities of Page followers.

If only there were tools that made these features easier to access and use on our mobile phones.