Nilas, the startup founded by Dropbox and MIT alums, previously known as Inbox and focused on offering developers a better API for building email client applications, has raised $8 million in Series A funding, the company announced this morning. The round was led by Formation 8, and included participation from prior investors Fuel Capital, SV Angel, Data Collective, Great Oaks and others.

The startup had earlier disclosed some of its investors, but had kept the funding specifics under wraps as it worked towards its Series A.

As a part of the new round, Formation 8’s Joe Lonsdale is joining the company’s board. To date, Nilas has raised $10 million in outside funding.

According to company co-founder Michael Grinich, the rebranding to “Nilas” from “Inbox” came about because the team wants to make it clear that its products aren’t only about email – they’re about your personal data.

“Email is this enormous database of your life online, that you only see a small part of. It’s like an iceberg in that way,” he says. “The word ‘nilas’ actually means “young sea ice” that will grow into icebergs.”

Nilas launched in 2014 around the same time as Google introduced its new Gmail API, which offered developers a more modern way to build email applications that access Gmail. But Gmail’s API is limited to Google’s own email platform, naturally, while Nilas works with other email systems, including Yahoo, iCloud and even Microsoft Exchange.

Before Nilas, developers interested in building email applications would have to work with older protocols like IMAP, even if they were building an app that wasn’t designed to be a full email client – like an app that lets you snooze messages, or one that lets you send emails on behalf of an end user, for example.

Grinich, previously of Dropbox and Nest, had long been interested in solving this problem for developers, having even written his thesis on email tools while back at MIT. With Inbox, now Nilas, the goal has been to fixed the “underlying plumbing” for developers, so they could focus on just building out the unique features of their own applications. Along with Christine Spang, an early Linux kernel engineer at Ksplice (bought by Oracle), they created Nilas.

After launching last summer, Nilas rolled out a hosted version of its service so developers wouldn’t have to worry with syncing and storing mail data themselves. The service also offers full support Microsoft’s ActiveSync, including contacts and calendar, allowing Nilas to target the enterprise markets.

At that time, the company also launched open source “scaffolds” for developers to build new apps on top of, which were available in two formats: HTML5 and iOS.

The company is currently declining to say how many developers signed up to use its API, but did note that a majority of companies choose the hosted cloud infrastructure for their production apps.

“Our infrastructure is already built to scale, and includes enterprise support. Plus, with our new pricing announced today, it’s cheaper than trying to run the Sync Engine yourself,” notes Grinich. The company is now offering freemium pricing, with unlimited API requests that’s free up to 10 accounts, then a pay-as-you-grow plan that scales at 79 cents monthly per syncing account. 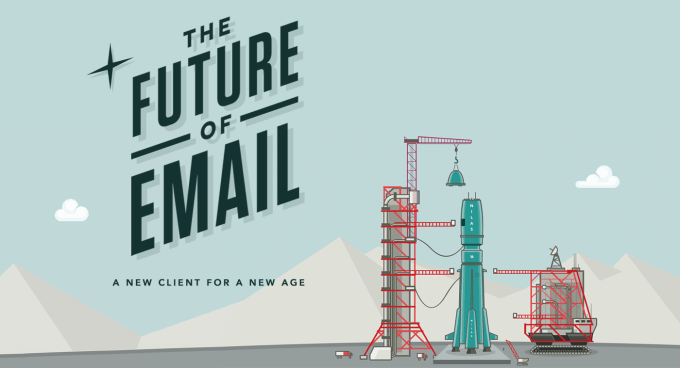 A New Nilas-Powered Email Client App In The Works

Today, the company is going a step further – it announced this morning that it’s building its own email client application aimed at end users. In development for several months, the client application represents a new avenue for the business, which before was solely focused on serving its developer customers, not email users directly.

This client, built with JavaScript, is not available at present, but Nilas offered a preview on its blog, describing the service as something that would “feel native” on Windows, Mac and Linux. “It should have real windows, its own icon, and the ability to run in the background or offline,” the post says. And it should be extensible by the end user, the company notes.

“Atom is actually a web app, powered by a new desktop app framework that combines NodeJS and Chromium. This foundation allows the entire app to be written in JavaScript, with native access to the file system, full network IO, and a wide array of NodeJS modules,” the post explains. “Unlike other projects offering a desktop environment for JavaScript, Atom’s core includes tight system integration, clear documentation, and many little details that push it through the uncanny valley.”

The team at Nilas forked Atom to create the mail client, and is also using other technologies including React for speed and performance, and Flux to aid in extensibility.

Grinich says the team always thought about building its own client, but it took some time to find an architecture and design for the app that suited their larger goals. “I think this is actually the 5th or 6th client we’ve built. Things like this take a lot of iteration to get right,” he says. “We’re really excited about building on the Atom project with ReactJS.”

The email client will also be monetized, likely on a freemium model and ad-free.

The company also says that over the next few months, it will be detailing more about the architecture of its new client, and developers can stay informed by joining the Nilas mailing list.

In addition to the continued product development and growth, the new funding will also aid in hiring more engineers and designers.