Founded by Dropbox and MIT alums, a new startup called Inbox is launching out of stealth today, hoping to power the next generation of email applications. Similar to the newly launched Gmail API, Inbox offers a more modern way to build apps that access end users’ inboxes. But instead of being limited to Gmail, it also works with Yahoo, Microsoft Exchange and others, the company says.

In addition, jabs the company’s website, “Inbox is an email company. Google is an advertising company. This product is our focus, and will not be ‘discontinued’ unexpectedly.” Burn!

Google made waves with the announcement of a new “Gmail API” at its Google I/O developer conference earlier this month, which offers developers who build email applications new tools to access messages, threads, labels and other parts of the Gmail inbox without requiring full inbox access. The idea is to reduce the reliance on older protocols, like IMAP, when apps don’t have to work as an email client, but are rather focusing on a specific feature set – like snoozing messages, or only sending emails on behalf of an end user, for example.

Similarly, the idea with Inbox is to offer an upgrade of sorts from the “archaic protocols and formats” that developers would otherwise have to learn today in order to work with email. However, it supports a wider range of developers, from those who only need a simple feature to those who want to build full-fledged email clients for end users. 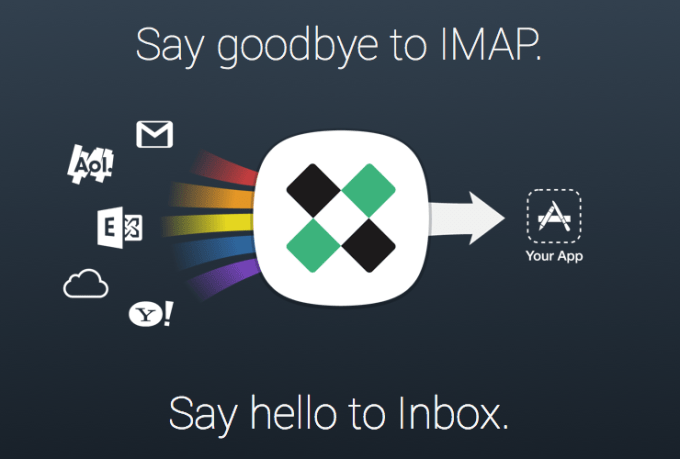 The company was co-founded by MIT alums Michael Grinich, previously an engineer at Dropbox and designer Nest, and Christine Spang, an early Linux kernel engineer at Ksplice (acquired by Oracle). The core team at Inbox also includes several other MIT alums, plus those with experience from Google and Firebase, as well as two graduates from the Parallel and Distributed Operating Systems group at MIT CSAIL, which spun out Meraki (acquired by Cisco).

“I actually wrote my thesis at MIT on email tools, and discovered how difficult it was to add features to email apps,” explains Grinich of how Inbox came to be. “One big issue was the underlying plumbing – IMAP, MIME, character encodings, etc. – which is what Inbox fixes for developers.”

But the larger goal with Inbox is not just to offer a suite of developer tools, but to create a new email standard. That means, Grinich says, the company has to provide the fundamental infrastructure as an open source package.

“The sync engine is available for free on GitHub, and we welcome discussion and pull requests,” he says. Currently the open source sync engine works with Gmail and Yahoo mail, with plans to expand soon to all IMAP providers. Meanwhile, enterprise users on Microsoft Exchange can request access to the Inbox Developer program, which supports ActiveSync, and is now in private beta.

There are a handful of apps on Inbox already, including a few demos on GitHub using the Inbox SDKs (JavaScript or iOS). With the Inbox API, developers can access REST endpoints for retrieving, modifying and sending email, as well as building custom filters, accessing attachments, creating drafts and more. Grinich also points out that developers can build using the Inbox APIs for free without sending email data to a third-party.

Today, developers can download the Inbox engine, sync an account, and begin building on top of the platform in a local development environment. In the future, however, the company will release a hosted version of Inbox that will allow developers to create applications without needing to also scale their own infrastructures.