A company called Wildcard is today launching a browser for the mobile age, designed specifically with the support of the newer “card” format in mind. Cards are a new design trend which emerged within mobile applications as a way to better showcase content, including rich media like photos and video, on devices’ small screens.

Wildcard is also announcing it has raised $10 million in funding led by General Catalyst Partners – a large amount for a small company which hadn’t even launched.

To some extent, investors are betting on the team and the big idea behind Wildcard, more so than they are on the consumer-facing Wildcard app.

Explains Cooper, a partner at Lerer Ventures, he decided to work on Wildcard because one of his biggest frustrations was that the web basically just didn’t work that well on his phone. “The worst user experience on every iPhone owners’ homescreen is their browser,” he says.

At the time, it wasn’t a forgone conclusion that native apps would win over the web on mobile, Cooper adds. Now, more than 90% of internet consumption happens inside mobile apps, but he believes it’s no longer a battle where native apps “win” and the web loses, or vice versa.

“They were coming together,” says Cooper. “And card technology represents this new third alternative that’s at the intersection of those two previously disconnected ecosystems.” 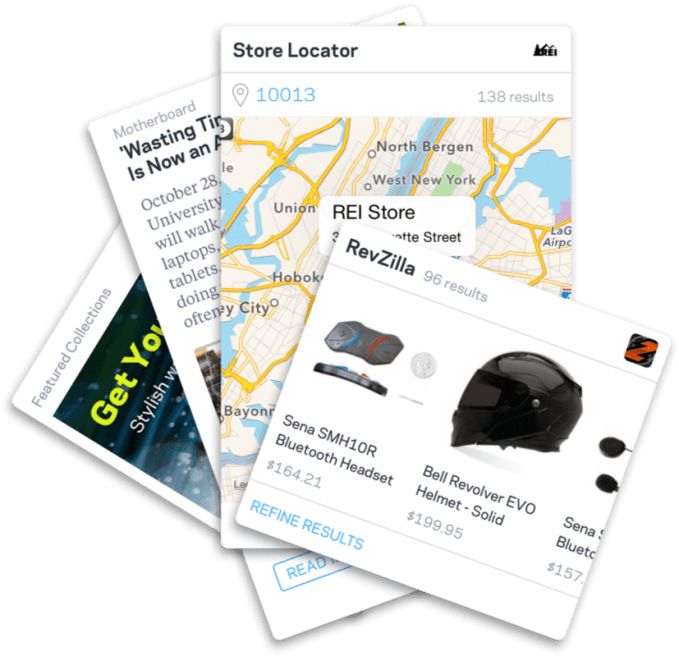 The Wildcard browser is, to some extent, a showcase of card technology in a way that consumers can understand. Meanwhile, the more immediately viable side to Wildcard’s business – one that doesn’t involve usurping Google Chrome or Apple’s Safari on mobile phones – is the SDK that Wildcard is building for mobile developers. This toolset will allow developers to create cards one time using Wildcard’s “card platform as a service” that will then work on any other service that supports a card-like interface, including Twitter, Pinterest, and soon, Facebook, in addition to Wildcard’s own mobile browser.

Today, a number of technology companies are working in an adjacent space to Wildcard, creating paths through native mobile applications called deeplinks that are designed to make moving through pages within apps more like surfing the web. Cards can house deeplinks, too, but they’re less about how links should operate, and more about how rich media or a part of an application’s workflow should be presented to the end user.

But the problem with cards is that they’re just a design pattern – not a standard. That means when companies like Facebook and Twitter implement cards, they’re doing so in a proprietary way. That has led some in the industry to proclaim “it’s time for an open standard for cards.” Without standards, Facebook and Twitter’s cards can’t interoperate, leaving only headaches for developers trying to support each service’s own implementation. And the number of services rolling out card-based designs is growing. 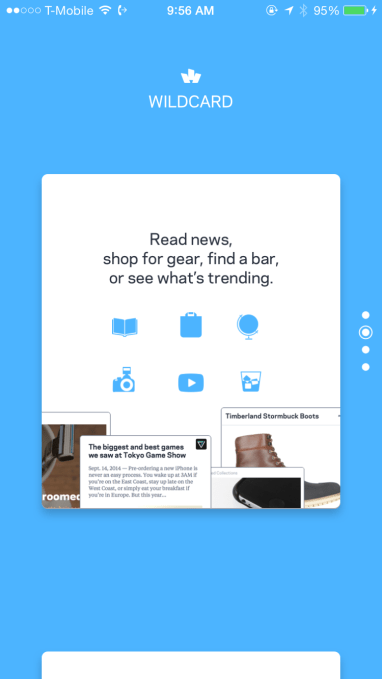 That’s why the card translation service will be useful for developers in the short-term, and potentially Wildcard could participate in a conversation around the standardization of card technology if one was ever to occur.

In the meantime, it’s fun to envision how a truly mobile web could operate via the Wildcard browser where users can search for current events, read news, shop and checkout with ease, watch videos, listen to audio and more. Yelp is an early partner for the browser, while other cards Wildcard built itself. App publishers and brands using Wildcard to make their cards will also have their services exposed in the browser.

Partners and developers can sign up here. Meanwhile, the app is a free download here on iTunes.