As Apple gears up to unveil what many believe will be its latest iPad tablets and Mac computers on Thursday, Gartner has today published figures that underscore the challenge in the market for devices like these against the ineluctable rise of the cheaper, and ultimately more easily replaceable, smartphone.

Gartner’s Q3 and annual figures for device sales worldwide — covering smartphones and tablets as well as PCs of all sizes — shows that tablet sales in 2014 will only see 11% growth over last year, compared to growth of 55% the year before. This works out to a projected 229 million tablets selling in 2014, or 9.5% of overall worldwide device sales, which will total 2.4 billion devices for the year, and 2.5 billion in 2015.

The winner in the consumer electronics race continues to be smartphones, and specifically the Android smartphone.

Devices built on Google’s mobile opeating system will see sales of 1.2 billion devices this year, working out to more than half — 51% — of all devices sold — smartphone or otherwise.

And while there are still sales of feature phones in the market (as evidenced by Gartner’s findings that feature phone-heavy Nokia remains number-three after Samsung and Apple), Gartner predicts that they are not long for this world. It says that by 2018, every nine out of 10 phones sold will be a smartphone.

It’s a trend that will be played out especially in emerging markets, where Android will cross the 1-billion annual market in sales in 2015 in geographies outside of markets like the U.S., Western Europe and Japan. This year, emerging markets already represent nearly three times the number of sales that take place in developed countries (see full table below).

Ultramobiles, the not-quite-PC and not-quite-tablet and not-quite-phone category, will remain niche but continue growing: there will be 37.6 million of these sold this year, and as befits a fast-growing but still-small category, it will grow the fastest. Ultramobiles will essentially see a doubling in sales in 2015 while the other categories continue to see only modest rises.

But ultramobiles are also, effectively, suffering from the same issue as tablets (and to a lesser extent PCs): people are simply not replacing them as much. “In the tablets segment, the downward trend is coming from the slowdown of basic ultramobiles,” Gartner writes. The analysts believe that the life cycle of tablets and ultramobiles is around three years at the moment — meaning buyers this year won’t replace devices until 2018. Gartner says it projects 83 million less new tablet purchasers in 2014-2015 and 155 million less tablet replacements through 2018.

It’s not that these devices are unsatisfactory to consumers; quite the opposite. “I think that maybe they’ve lived up too much to their expectations,” jokes Roberta Cozza, a Gartner analyst and co-author of the report. “There are too many solid devices out there and users don’t have a reason to upgrade to the new units. They are just happy with software upgrades.”

She adds the she thinks tablet makers may already have to start setting their sites more on emerging markets. “I think that this market has really just reached a point of saturation in mature markets. In the US for example by end of 2014 we are expecting a 50% penetration. Things just had to slow down as new users are drawn to another device category, larger display smartphones.”

Samsung on top, but hurting from a lack of must-have new features

Cozza also confirmed for me what many of you probably already suspect: Samsung is head and shoulders above all other OEMs at the moment in terms of sales.

If we take all devices — including PCs, ultramobiles and phones, Samsung is still number one, with around a 20% share this quarter, she says. And to underscore how much Samsung’s fortunes are driving by Android, she points out that Samsung’s share in the PC category is “tiny.”

With Apple in second place at around 10%, Nokia in third just behind it and Lenovo in fourth in the overall category (the Microsoft-owned Nokia still has a pretty brisk trade in feature phones that buoys it), the stage is being set up for some rebalancing in the quarters ahead.

“We’ve definitely seen a slowdown in Samsung in Q2 in the smartphone market, and they’ve been losing share,” Cozza notes. “I think that the issue is that in the premium side of the market with phones, and they will have this even more so in Q3 and Q4, is that will be under pressure from Apple because now of the new alternative with larger display.” By this she means the new iPhone 6 models.

Premium device users, she says, haven’t had “enough reasons” from Samsung to either buy their new devices, or even stick with the brand. “Going form the Galaxy S4 to the S5 or even to the S4 from the s3, there is nothing really groundbreaking that generated a lot of replacement. On the contrary, we are going to see a lot of replacement on the Apple side because the bigger screen is a tangible feature to have.”

The emerging picture for emerging markets

While developed markets in many ways call the shots when it comes to the latest and greatest features and high-end handset sales, it’s the emerging market sector that will be setting the pace for volume growth.

Another fast-moving brand, Cozza notes, is the Chinese handset maker Xiaomi, which is now pushing more strongly into emerging markets outside of its home country. “We’ve seen really their share growing very fast and during Q1 and Q2 of this year, but as the Chinese smartphone market has reached saturation Xiaomi will go into other regions.” Another that will do this is Huawei, she says. “Now all these Chinese brands are really going into other markets, where the volumes will be.”

Indeed, when you consider Gartner’s figures for how emerging and mature markets are comparing in terms of operating systems, you can see how the volumes have massively shifted — a sign of where attention and investment will continue to go in years to come. 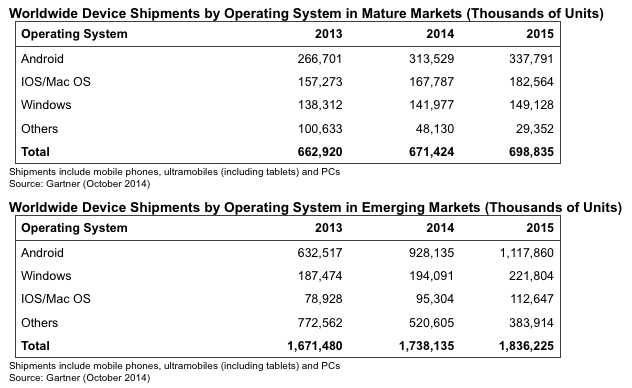