The ALS Ice Bucket Challenge has shown that other things besides Grumpy Cats and silly dance videos can go viral – even charitable giving. And while some questioned if having people dumping buckets of ice on their heads was the best way to raise money for the non-profit organization fighting Lou Gehrig’s disease, it turns out those concerns were unfounded: ALSA.org reports that as of September 2, it has received $106 million in Ice Bucket donations from over 3 million donors.

Donations have ranged from under $1 to $200,000, the organization reports, and have come from individuals, corporations and other foundations. Individuals who donated between $100,000 and $200,000 have included actors Leonardo DiCaprio and David Spade, T-Mobile CEO John Legere and Chairman of Carnival Cruise Lines Micky Arison.

The spotlight has brought a heightened awareness about the disease and related research efforts, but it has also put ALSA under attack to some extent, forcing it to defend itself against claims from satire websites that people share on social media as if they’re hard news. (This is why Facebook has been testing the use of a “satire” tag on shared news stories – Facebook users apparently have difficulty discerning truth from bias and falsehoods.) 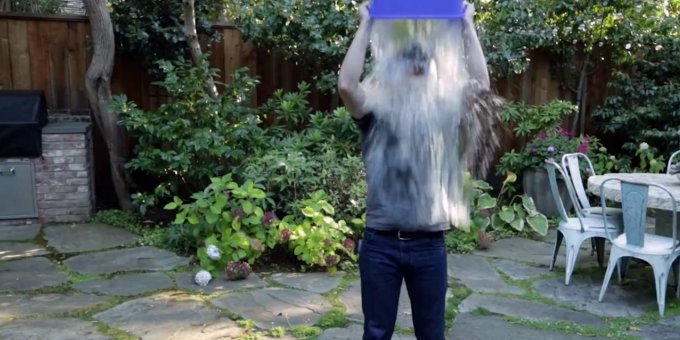 While the challenge’s success as a viral meme should be the feel-good story of a year filled with bad news involving wars and violence and terrorism, some in the media have poured cold water (ha!) on the positive, warm-and-fuzzy feelings this viral act of charity has inspired. Quartz pointed out, for example, that the ALSA is sucking in donations at the expense of other charities, who will now suffer. Vice said the challenge is “narcissism masked as altruism,” which BBC countered by saying that might not be such a bad thing.

The Ice Bucket Challenge has proven to be an interesting study into the spread of viral memes, as well. Earlier in August, Facebook’s data scientists looked at data from June 1 through August 17, and visualized the challenge’s spread across the U.S.

The spread structure was centered in Boston, which Facebook speculates could be attributed to former Boston College baseball player, Pete Frates, who was diagnosed with ALS in 2012. 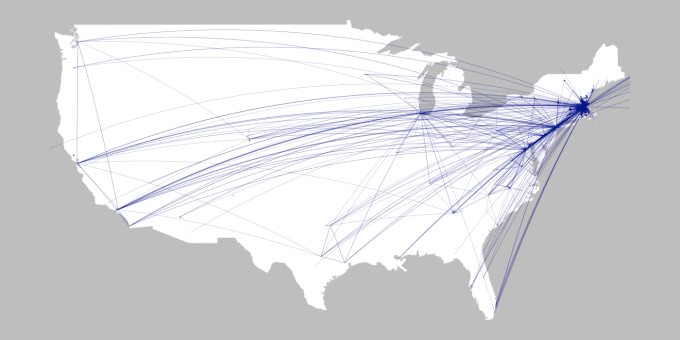 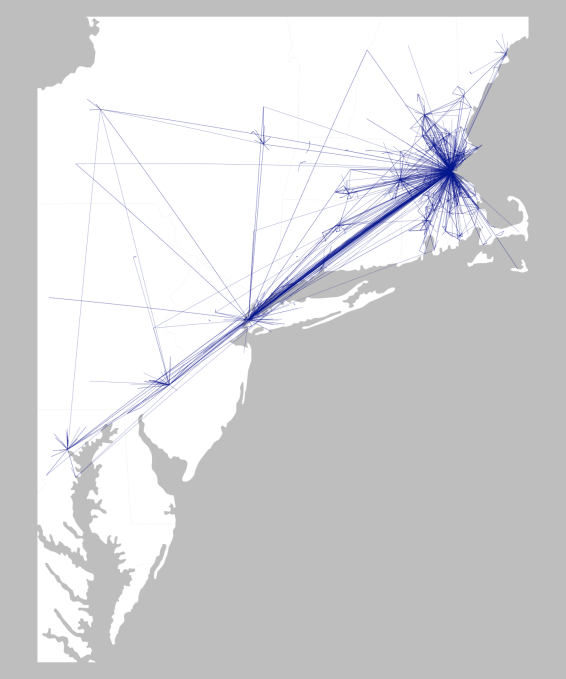 This is a notable data point, since the challenge’s origins are actually somewhat unclear, and have been attributed to a number of sources, including a “cold water challenge” that began in the Northern U.S., which is documented in more detail on KnowYourMeme.com. The original version involved jumping into cold water, then nominating another to do the same. Later, this became the ice bucket dump, and charitable donations were the result of refusing to participate.

By late July 2014, however, the charity being named was the ALS Foundation.

During that time frame, over 28 million people joined the challenge by posting, commenting or liking a challenge post, Facebook said. 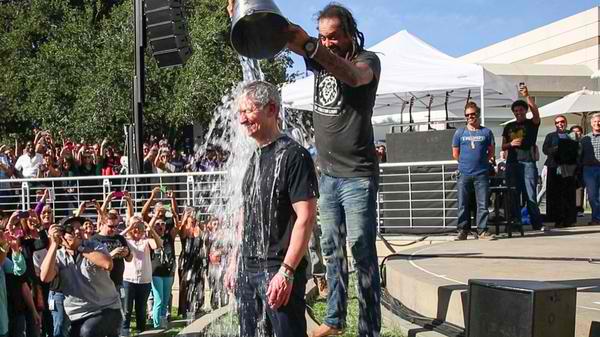 According to data curated by media analyst Jeremiah Owyang, near the end of August, the challenge had then been responsible for around 2,330,000 YouTube videos and was responsible for more Google searches than Gaza, Ferguson, and Iraq combined. (See below slideshow). That latter statistic may seem depressing, but the fact that the Challenge emerged amid an otherwise horrific news cycle could have actually helped contribute to its success. People needed a bright spot to cling to.

Data from video analytics company Strike Social shared at the end of August, notes that Charlie Sheen’s Ice Bucket Challenge video had by then just narrowly beaten out Bill Gates’ video in terms of views, with 16,743,369 views on the TMZ YouTube channel versus 16,031,256 views on Gates’ thegatesnotes channel. Others near the top of the list included Cristiano Ronaldo, the “fails” compilation (people whose challenge videos went horribly wrong), Kermit the Frog’s challenge video, and those from other celebs.

Web analytics firm SimilarWeb also looked into the top five celebrity videos on YouTube, ranked in order of their search engine popularity for driving traffic to YouTube and found that Charlie Sheen again beat out Bill Gates on this metric as well, followed by Chris Pratt, Lady Gaga, and Kate Upton.

Of course, the video numbers are ever-changing as new viewers stumble across the challenge videos and Facebook posts every day.

While much of the data about the challenge so far has focused on the number of videos and increasing size of the donations, SimilarWeb also took a look at how the viral sensation also affected the ALSA.org website itself, along with other organizations. The company tracked data from over 30 million websites with 1.1 trillion visits for the months of July and August 2014, to arrive at its conclusions.

Before the Ice Bucket Challenge, the website was averaging close to 8,000 visitors per day. Over the last 4 weeks, that changed dramatically, with the average number of visitors rising to 630,000 per day, or an increase of 7,775%. 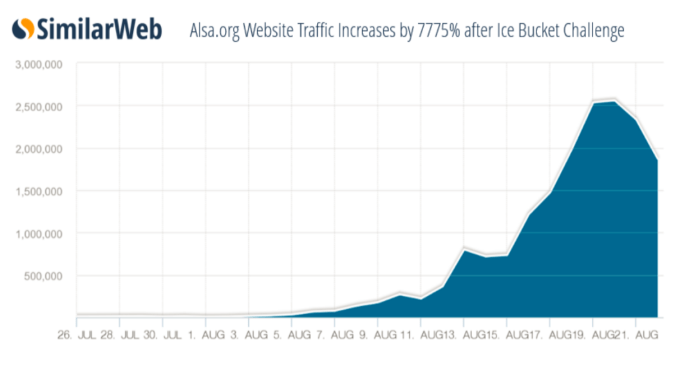 During the month of July, 11% of visitors clicked on the donate button to go make donations, and by August 24th, the organization shared that it had already raised $70.2 million from 1.3 million donations, compared with $2.5 million raised during the same time (July 29-Aug. 24) the year before.

This data tracks against the 10.3 million visitors to the ALSA.org website during the period SimilarWeb measured, resulting in 10% of web visits converting into real money donations, the firm reports.

The Challenge even impacted Wikipedia, resulting in a more than 100 times rise in pageviews for ALS, which speaks to its capacity for awareness-raising.

The challenge has not been without its critics, of course. In addition to the above-mentioned claims of how it could hurt other charities, or how it contributes to a generation’s self-indulgence, others have said the challenge is an example of “slacktivism,” meaning a sort of stunt philanthropic gesture that won’t lead to an ongoing relationship between the charity and donor.

That may be true, but with over $100 million raised thanks to the challenge, the ALSA should be doing okay for at least a little while. And when they use these funds up, maybe the world will be ready for Ice Bucket, take 2.

At the end of the day, the Ice Bucket Challenge was successful because it took a simple formula for viral content creation, and added the charitable request as part of its easily reproducible format.

TechCrunch examined this “symbiotic meme” structure before, following the Harlem Shake’s rise as a viral sensation. The idea, simply put, is to create a short video where users can insert their own variables into the equation, and replicate the action with little video production skill. Pouring an ice bucket over one’s head – or having a friend do it – is easy to mimic.

The Ice Bucket Challenge’s legacy is that it could become a blueprint for achieving viral success, which other charities could choose to replicate. Simply ask the selfie generation to once again turn their cameras on themselves, but infuse that act with a higher purpose.