TechCrunch has learned that Apple has made another acquisition, one that it is using to boost its e-books effort and “beat Amazon at its own game.” It has bought BookLamp, a startup based out of Boise, Idaho, that developed big data-style book analytics services.

[Update 6:45pm PST: Apple has confirmed our report of the acquisition. The company tells us “Apple buys smaller technology companies from time to time, and we generally do not discuss our purpose or plans.”]

A second source says Apple bought BookLamp’s employees and technology for a price that was “higher than $10 million, and lower than $15 million.”

BookLamp’s most well-known product was the Book Genome Project, a platform that let users find suggestions for books to read based on natural language analysis of other titles. BookLamp’s tech and talent could help Apple improve its iBooks service with better recommendations, search, and categorization.

TechCrunch has reached out to Apple for confirmation on the deal with BookLamp, as well as to BookLamp’s CEO Aaron Stanton and several former employees including Matt Monroe, and Dan Bowen. Stanton said “Sorry, Josh. I can’t help you”, which meshes with the strict gag order Apple places on companies it buys. But in the meantime while we wait for an official response from Apple, here’s some more evidence we’ve amassed. 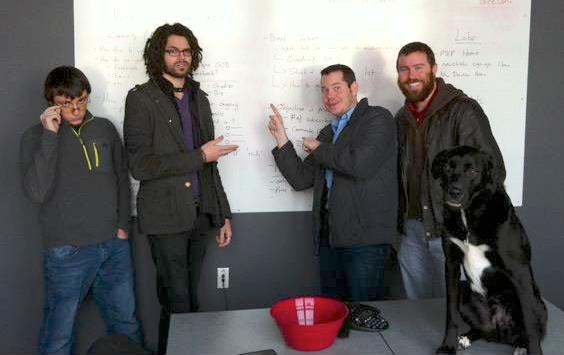 We first heard of the sale via an anonymous tip (thank you, anonymous reader). Digging around, we found that several employees appear to have decamped from Idaho to the Cupertino, California-area where Apple is headquartered.

Prior to the exit, BookLamp had raised around $900,000 from local backers. Yes, it looks like BookLamp is Apple’s first acquisition out of Idaho. And it turns out BookLamp had also been in talks with Amazon at one point, but how far they went is not clear. Amazon ultimately went on to acquire GoodReads, another competitor in the book recommendation space, and Apple bought BookLamp.

As is typical for many Apple M&A moves, the whole thing has been kept very quiet. Like “library voices” quiet.

When BookLamp announced in April that it would be shutting down the Book Genome Project, it described the closure in vague terms, thanking users for being a part of its “journey to date” as the company “evolves its mission.”

To keep up appearances and throw people off the scent, BookLamp still has an office in Boise, and a second office in Cupertino, but none of the startup’s 10 employees work in either. “This was just the line created for them so that they didn’t have to explain what was happening. They’ve all moved to Apple,” our source says. “We were wondering when someone would come knocking and asking more questions.” 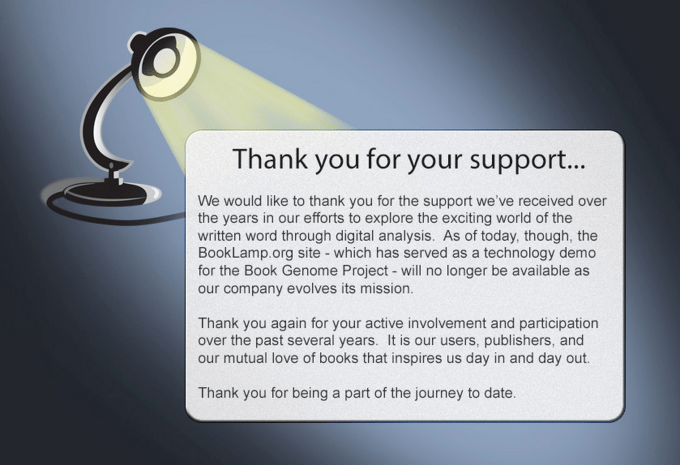 Indeed, as we started to look into this story, we could see BookLamp employees tagging Facebook posts in Cupertino, Palo Alto and San Francisco — while listing their state of residence as Idaho, where the company was located. Despite the site’s shut down, several members of the core team haven’t changed their current employer from BookLamp or updated their current city. These signals are hallmarks of how Apple handles acquisitions.

BookLamp was one of the first companies to get incubated in the Water Cooler, a hybrid co-working facility in Boise — a city that has produced some other notable tech companies and tech exits like MarkMonitor (sold to Thomson Reuters), First to File (sold to CPA Global), and Proclarity (sold to Microsoft).

Relative to other startup acquisitions, BookLamp went for a modest price. But that understates the company’s ambitions and track record. From what we understand, prior to the acquisition, BookLamp was working on a number of B2B projects alongside its initiative it described as “Pandora for books”.

BookLamp’s public-facing product was designed to scan the writing style of books you like and suggest novels or authors with a similar feel. It could also break down plot themes and content, allowing for better search-ability and discovery. One source suggests that Apple bought BookLamp to power an ebook search competitor to Amazon.

We covered BookLamp back in 2011. At the time, BookLamp wanted to do for books what Pandora did for music: scanning content for quantifiable similarities to power recommendations. Last year, Book Genome Project and BookLamp CEO Aaron Stanton said it was indexing “40,000 to 100,000 titles a week.”

Here’s a look at how the BookLamp technology works — as represented by a graphic created by Digital Book World for a visualization article on the works of Stephen King. In this example above, its scan of King’s “Salem’s Lot” found the prevalence of ‘vampires & the supernatural’, ‘funerals / death/ memorials’, ‘homes & domestic environments’, and ‘pain & fear / negative emotions’.

Here’s another appraisal, this time of “Carrie” by Stephen King:

After doing its analysis of a book you liked, BookLamp could offer suggestions that match its “BookDNA”. It could, for instance, recommend “The Templar Legacy” by Steve Berry for fans of Dan Brown’s “The Da Vinci Code” because they both feature ‘catholic institutions’, ‘history / academics’, ‘strategic planning’, and ‘libraries’. Its stated goal was to divorce its suggestions from what’s popular and just show you what’s most likely to become your next page-turner.

Beyond the Book Genome Project, BookLamp also Kickstarted the creation of a sort role-playing game for reading called The Game Of Books, where you’d level up and earn badges for reading around specific themes like science fiction or murder mystery.

But the startup’s serious business of providing content analysis to e-book distributors was happening behind the scenes. Among its customers were Amazon, Apple and a group of publishers in New York. For them, BookLamp provided data analytics services that ranged from automatic book screening for proper categorization (Apple) to providing a platform for the publishers that they could use for screening manuscripts to consider whether a book would sell well with a particular demographic, or how much marketing budget should be allocated to it. 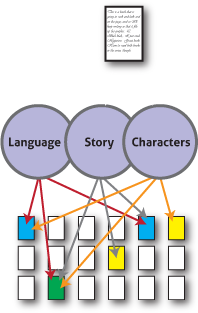 Part of the reason that Apple made the move to acquire BookLamp was because of this long list of clients. “At first Apple and BookLamp talked about growing their contract, but then they talked more from a strategic standpoint,” a source says. “What Apple wanted to do was, instead of contract, they wanted to make sure whatever work was done was done just for them.”

And what is that work? The details are not clear yet, but the source says, “in broad strokes, the goal that [founder Aaron] Stanton and three of the folks he was working with from the original BookLamp crew is to beat Amazon at their own game.”

“I can tell you that in the next year to 18 months you will see some fairly major initiatives focused on books and reading coming out of Apple.”

This is somewhat bolstered also by another detail from our original tipster, who claims that Apple is looking to poach yet more search talent from eBay to flesh out a search team using BookLamp’s technology.

There are several big ways Apple could be using BookLamp to bolster its own e-book platform.

One option would be to use BookLamp to build a competitor to Amazon X-Ray, which lets readers see where and how often terms or characters pop up in a book. That could be useful for classifying books into categories or flagging ones with sexual or violent content as being unsuitable for kids — or simply providing feature parity with Amazon’s Kindle app, which offers X-Ray on iOS.

Considering Amazon’s headway into self publishing, it’s enticing to wonder whether BookLamp’s technology for screening manuscripts to figure out their market fit, or the other tools they were developing and using, may end up getting implemented under their new owner to determine what it should promote. BookLamp’s algorithms could augment Apple’s human editors who choose what’s highlighted on the iBooks homescreen.

The most obvious way, though, would be to use BookLamp’s content and style analysis to power individualized iBooks recommendations.

Right now, Apple’s iBooks app doesn’t focus on personalization. It features Top Lists like the App Store, featured selections, author spotlights, and categories, but lacks “if you like that then read this” style suggestions. With books often available from many e-book distributors, companies like Apple need to offer extra value somehow. If Apple can make you recommendations you trust, you’ll probably follow through and buy or rent your books from it.

While BookLamp once used the name to turn reading into a sport, it’s now become a weapon in the real Game Of Books between Apple and Amazon.

This article has been amended to give proper credit for the visualization images to Digital Book World.