TalkBin, a customer feedback platform for businesses that was incubated at Y Combinator and then acquired by Google in 2011, is being shut down on July 31, citing “dwindling usage.”

Enquiries sent to the company are receiving a brief autoreply saying that the service is no longer being maintained or supported, that it will be shut down effective July 31, and with suggestions of alternatives to Talkbin. A full copy of that note is below.

One of those listed alternatives, Bellevue, Washington-based Talk to the Manager, has further elaborated on the story in a blog post from its CEO John Washam.

He writes that his company had heard a few months back that TalkBin would be shut down. He also quotes a version of the note that TalkBin had been sending out to existing customers, which provides more detail about the shutdown compared to the note we received:

“TalkBin usage has dwindled over the past 2 years, and we have decided to shut down the service on July 31st, 2014.  Effective immediately, all billing has stopped for your existing locations in Talkbin. Talkbin will be completely shut down on July 31st, and all account data will be deleted shortly afterwards.”

The note also says that existing users of TalkBin are no longer being billed for the service and they are able to archive the records of existing conversations on the TalkBin platform. A copy of that note is at the end of this post.

Google had acquired TalkBin for an undisclosed amount about five months after the startup had launched, initially as a mobile-only app. After shutting it down briefly, Google re-launched TalkBin with expanded web functionality, and kept it running as part of its Google Local operation.

For $25 per month, per location, TalkBin provided what it described as “like buying a data plan for customer feedback.” Subscribers received their own TalkBin messaging numbers, signage for their businesses such as window decals and sales support. You could think of it as a less-social kind of social media, or an extension of customer feedback features for brick-and-mortar, smaller businesses.

Washam (whose Talk to the Manager service is $29/month after the first, free month) tells us that Talkbin’s main market was restaurants although it also worked with other local business, too — similar to his own startup, which has been investing to diversify its self-serve model to approach merchants via large resellers.

Even if TalkBin may not have been the primary beneficiary, Google has continued investing in building out services for the local business segment — specifically with features catering to restaurants, as witnessed by its recent acquisition of Appetas, a website building platform for restaurants. By coincidence, Appetas also went through in same Seattle incubator, SURF, as Talk to the Manager.

But it is also no stranger to the delayed shut-down of acquired services. Others have included local recommendations app Alfred (acquired December 2011, shut down July 2013) and mobile ad aggregator AdWhirl (acquired November 2009 as part of AdMob, shut down June 2013). It’s also not afraid of sometimes-controversial, regular spring cleaning of its own, home-grown operations.

The full messages are below:

TalkBin is no longer being maintained or supported, and the service will be shut down on July 31st, 2014. We suggest you find another service for your customer feedback needs. Several other services exist that provide similar functionality to TalkBin, including the following (all unaffiliated with Google):
+ OwnerListens, http://ownerlistens.com
+ Talk to the Manager, https://talktothemanager.com
+ Quibble, https://quibble.it

And the more detailed version: 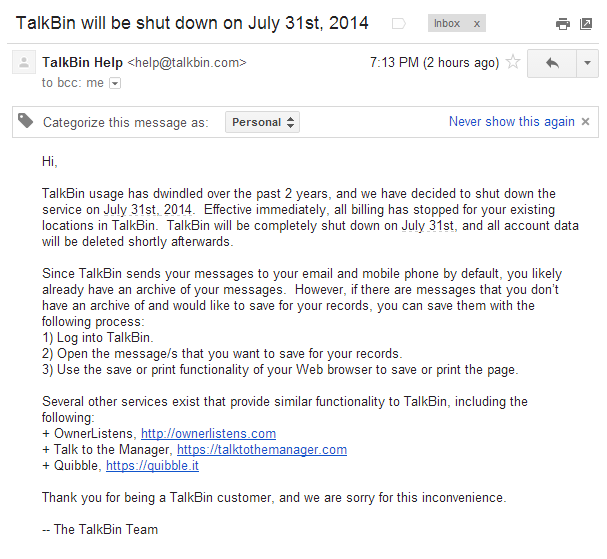