Looks like Latitude wasn’t the only Google product that got shut down yesterday in the wake of a new version of Google Maps. Alfred, the local recommendations app that Google picked up through its acquisition in December 2011 of developers The Clever Sense, is getting shut down on July 19.

The news was posted in a notification in the app itself (pictured here), which also notes that users have until July 12 — that is, this Friday — to get in touch through the app itself to request an archive of their data in the form of places they have tagged.

This is a turn of events from Google’s original plan to leave Alfred open “for the foreseeable future,” as the company told us back at the time of the acquisition.

But it’s not really a surprise, either. Apart from the fact that Google has a track record for closing down apps after buying them — Wavii, Meebo, Jaiku, Slide, and Aardvark are but a few examples — the company has been gradually consolidating more features in fewer products. In this case, it’s been adding more recommendation features into both its Maps app as well as Google+.

Having said that, it’s unclear whether any of the Alfred technology has been used in those recommendation features. 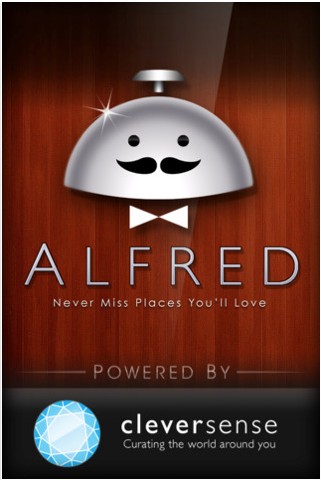 The app, for those of you who don’t know it already, went beyond being a simple search engine for places near you. Instead, it provided personalized recommendations for restaurants, coffee shops, bars and nightclubs using a combination of artificial intelligence and machine-learning algorithms, the idea being that it would learn more about places to suggest to you based on places that you visit. Some even compared it to a kind of proto-Siri in its approach to being a kind of personal assistant. After launching in 2011, the app and developers behind it were compelling enough, apparently, to attract the attention of Groupon as a potential acquirer (indeed, it may have been partly Google’s motivation to pick it up simply to keep it out of Groupon’s hands at the time).

Clever Sense originally had ambitions to take the app to more countries and to add more types of businesses beyond places to eat and drink. However, until today it remains U.S.-only and never expanded to further categories. The last update was over a year ago, in May 2012, so it has been left to run itself for a while now.

And Clever Sense people have also moved on. Originally, the team went en masse to Google’s local services division, Google Places, but today it looks like Babak Pahlavan, who had been the CEO of the developers, has taken the role of global head of products for Google Analytics, according to his LinkedIn profile.

We have reached out to Google and Pahlavan for more details and will update this post as we learn more.