App.io, a startup offering tools that allow iOS applications to run in the browser for testing or demo purposes, has now taken the next logical step: it’s bringing its technology the world of mobile advertising. With the company’s newly launched mobile ad product, developers can create ad units that are basically functional copies of their mobile app or game that consumers can play for a set amount of time, before having to download the native application in order to continue.

The company, previously called Kickfolio and backed by over a million in seed funding, has been developing its technology over the past 18 months, and today has more than 15,000 developers using its desktop browser product. Its service is reminiscent of an earlier Facebook acquisition called Pieceable, but instead of rendering apps in the browser using Flash, App.io uses HTML5 technology.

To date, App.io’s developer customers have run over 2 million interactive demo sessions via the desktop browser, and while the company declined to comment on revenue figures or growth, the company’s head of Biz Dev David Truong notes that its customer base has included “Fortune 500 companies and billion dollar startups.” (Those customers are under NDA, so he wouldn’t provide names, however.)

Before publicly launching the mobile app ad product, App.io worked with a few early clients to test the technology, and has now seen over 200,000 impressions of its interactive ad units. Conversion rates, so far, have been high – reportedly 3 to 5 times higher than similar ad units (meaning rich media or video ads, also run on App.io’s partner ad networks.) 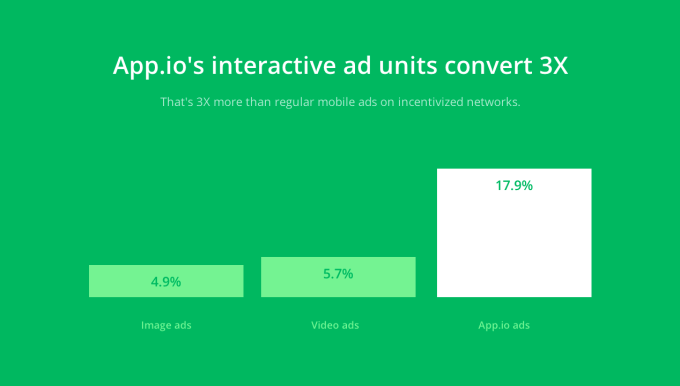 Developers interested in testing the technology for themselves upload their simulator build to App.io, and optimize it for the mobile ad experience by removing things like login screens or tutorials, for example. App.io will then vet the ad and approve it, and it will then begin to run on the partner ad networks (also still under NDA, but there are several networks involved.)

The company is still exploring how to charge developers, and is considering a number of models, including CPI (cost per install), CPM (cost per thousand), CPCV (cost per converted viewer) and even possibly a new model based on the LTV (lifetime value) of the user.

“The cost is very similar to video ads – cost per completed demo,” Truong explains. “We’re essentially creating the industry standard, so are still experimenting with ad unit costs. We’ve had a lot of interest to charge CPI, but based on the high quality of the users (lifetime value),” he continues.

“Due to our infrastructure and economics, we’re able to cost our ads at a very similar – and sometimes the same – as current ad offerings like video or standard CPI campaigns. A good industry standard CPI cost for high quality users could be between $2-$3 per install,” says Truong.

The ads are both HTML5 and MRAID complaint, meaning they can technically run on any MRAID complaint ad network – those that are capable of running rich media mobile apps, in case you’re not well-versed in all the ad network lingo here.

For consumers, the ad experience begins as either a banner or interstitial which, when tapped, launches into a full-screen playable game. Users can then play the game for a set amount of time, then a full-screen conversion button appears prompting the user to download the app from the App Store to keep playing. If they want to buy the game, they can tap that screen to go to the App Store and install the app to their mobile device.

App.io says it tracks the entire ad funnel from the impression, first tap, length of interaction, tap to the App Store, device install, and in the future, the Day 1, 7 and 30 retention metrics and cohort LTV.

The mobile ads are iOS-only for now and are optimized for iPhones and iPads, Truong says. But they could easily be run on Android in the future, since they’re HTML5 streaming technology. “It would be as simple as changing the App Store link to the Google Play link,” he notes.

Interested developers are being invited to trial the ads. More info on that is on the App.io blog here.