Kickfolio, a 500 Startups-backed company bringing iOS app testing to the browser, is today opening up its service to all developers. Similar in some respects to recent Facebook acquisition Pieceable or the Android-focused AppSurfer, Kickfolio also offers a way for developers to upload builds of their mobile applications to its platform, allowing others to then interact with the apps on the web, as opposed to having to download a test build locally to their mobile device.

However, Kickfolio’s solution differs from what Pieceable had offered prior to its acquisition, because its solution uses HTML5, whereas Pieceable’s playable apps were rendered in Flash. “Their solution was great, but it was not terribly performant,” says Kickfolio co-founder and CEO Edward Dowling. “In wanting to build a full-featured platform, we recognized that we needed to get the dependency away from Flash.”

Dowling’s team, which includes co-founders Chris Nolet and Diesel Laws, actually had some experience with Pieceable’s solution. Prior to its current iteration, one of their earlier efforts (also by the name Kickfolio) was a landing page for mobile developers which included the playable demo offered by Pieceable. “We had a lot of users, but it wasn’t getting the traction that we wanted,” says Dowling. He says they had initially added the Pieceable technology as sort of a side feature, but soon discovered that people really loved it. “We decided we would rebuild the feature ourselves, but from the ground up to make it fully HTML5.”

With the new product, developers can now upload a simulator build of their iOS application to Kickfolio.com, fill in a couple of details and then they’ll get a link to their app’s page in the browser, which is currently behind a shortened, but obscured, URL. From here, any tester can play the game or drive the app using their mouse and keyboard, as well as leave comments and feedback on the page. (You can see one example here). 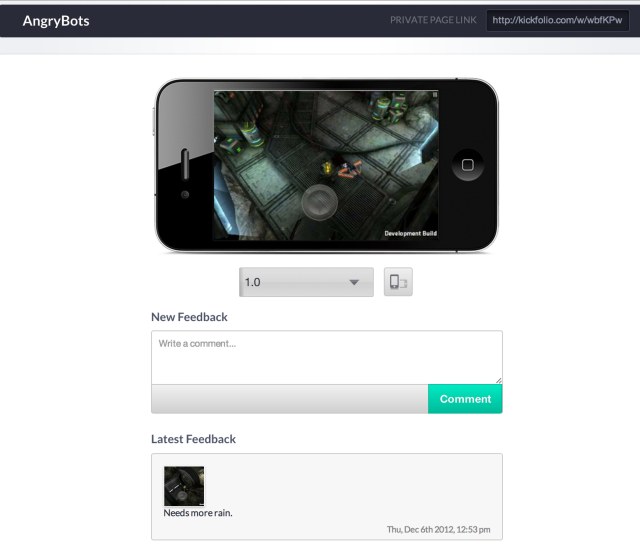 This page also lets you switch the orientation (portrait or landscape) or switch between different versions from the drop-down provided. In a few weeks, it will also offer an embedding functionality which will allow the playable app to run anywhere on the web.

The larger goal, explains Dowling, is to make it easier for anyone to sample apps before committing to purchase. “You simply can’t experience apps as well as you should be able to,” he says. “Before you download music, you’re able to have a 90-second preview of that song. The same with movies – you can see a trailer. No mechanism exists for apps right now. It’s so hard to know if it’s going to be worth the download or worth the money.”

There are some startups working to offer app demos, though. In addition to AppSurfer, mentioned above, you could consider things like AppTrailers, which rewards users willing to watch videos of apps, as being in the same space. Amazon offers a “try before you buy” functionality in its own store, and BlueStacks lets you run Android apps on any computer. But the iOS landscape, especially following the Pieceable acquisition, is fairly empty.

Since opening up its doors for invites, Kickfolio has had 1,000 invite registrations and 350 user registrations across industries ranging from gaming to utilities and beyond. The company is primarily targeting agencies and brands with its solution, but is open to any interested developer now.

Kickfolio has less than $500,000 in seed funding, and is now in the process of raising its seed round. 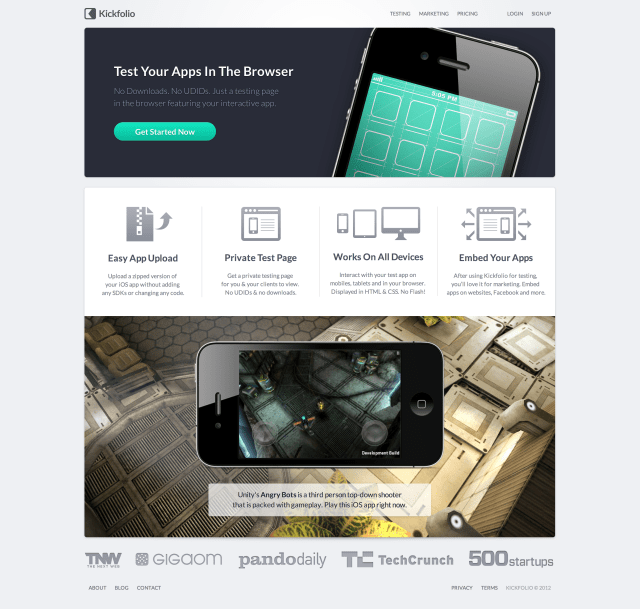