A Washington, D.C.-based startup, Uppidy, which lets you securely back up your SMS, photos and videos to the cloud, has been acquired by Gryphn, now called ArmorText, the makers of a secure messaging client for smartphones. The two will now be combining their services in order to tackle the need to manage communications for regulated markets, including finance, health care, and the public sector.

Terms of the deal were not disclosed, but Uppidy had raised $600,000 in seed funding previously. Only Uppidy management is joining the new company, with C-title roles in tech and operations.

Gryphn, you may recall, had been working on a secure mobile messaging client offering Snapchat-like self-destructing messages, photos and videos. However, an update released in January 2013 found the company promoting its encryption technologies as a differentiating factor – that is, instead of trying to be yet another consumer-facing Snapchat clone, the idea with Gryphn was that you could securely share things like passwords, PIN codes or business-related information, without worrying that the recipient could find some way to secretly download or store this content.

However, the company has since refocused its efforts more on the enterprise side of things, and is rebranding as ArmorText in the process. They’ve also removed their iOS and Android applications from iTunes and Google Play, with plans to re-introduce them later this month under the new name. 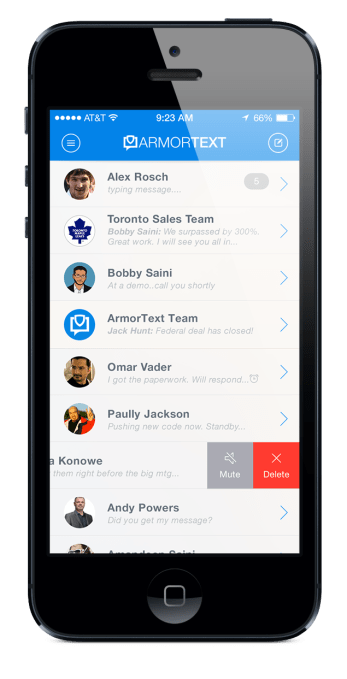 As ArmorText, Gryphn is working to offer the mobile enterprise a secure messaging solution, which allows its users to communicate in real-time, while also providing the security of end-to-end encryption to protect the content being shared across iOS and Android devices. In addition, the system is designed to meet industry regulations including Sarbanes-Oxley, HIPAA, FINRA and more, which will make it attractive to government and law enforcement, banks, brokers and finance professionals, doctors and hospitals, and more.

With the acquisition of Uppidy, ArmorText will additionally be able to back up SMS and chat sessions. This, of course, would be policy driven – for example, employees with business-provided smartphones may be told that all their texts are backed up for compliance purposes, while those companies with BYOD policies (bring your own device), may start the backups from a given data (likely just after the hiring.) In the future, the idea is to make the technology even smarter, allowing for selective backups, so you could have personal conversations with some contacts, while business contacts’ chats would be archived to company servers.

According to Uppidy co-founder and CEO Joshua Konowe, Uppidy’s consumer-facing product is not being shut down just yet. But his team decided to sell because they were listening to the market. “Everyone loved the backup of the native texts – our 4.4 star rating from hundreds of reviews corroborated that,” he says. “But in the case of corporations it is an ongoing problem to manage all communications for regulated markets.”

He says that both companies had found themselves in the same boat, essentially. Businesses were asking for backups and audit trails for employee smartphones, and it only made sense to move in that direction.

“Companies were asking us to build an auditable version of our SMS archive – and we thought why wouldn’t we get the stuff that’s on the device off, or at least keeping it backing up – and then move those people to a secure environment.” Gryphn had that secure environment already, so it made sense to put the two products together.

Each service individually had only a small customer base – Uppidy had roughly 50,000 and Gryphn was about the same – but combined, they’re targeting a large market which is today piecing together a variety of solutions to deal with their compliance problems. Some companies even go so far as to limit texting on their phones, but then employees just do it from another device or turn to an app to workaround these kinds of blocks.

ArmorText would allow employees to instead continue texting, and even “disappear” content from their phones while ensuring it was still backed up on company servers for regulatory purposes. The new company will now compete with other enterprise solutions like TigerText for example, and will likely raise additional funding in the future.