When Open Garden’s FireChat launched on iOS about two weeks ago, it created quite a bit of interest, not in the least because it is one of the first iOS 7 apps to use Apple’s Multipeer Connectivity Framework. With that, the app can use a mesh network of local iPhones to build a local chat network, even if there is no network connection around. Starting today, Android users can join in the fun. 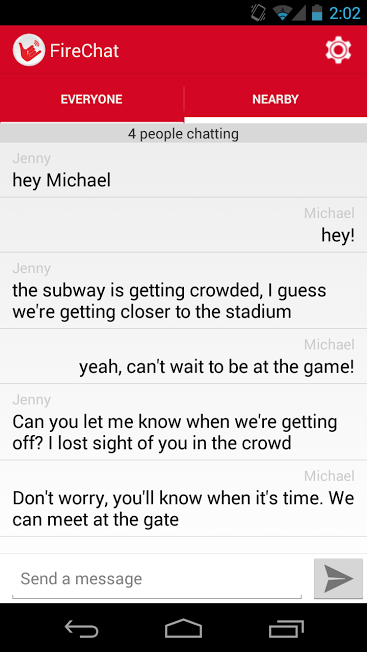 The Android version of FireChat is now available in the Play store. It features a somewhat different user interface, but in terms of functionality, it’s virtually the same app and just like on iOS, you can use it anonymously. While Android doesn’t feature anything like Apple’s Multipeer technology, the team at Open Garden has long worked on using mesh networks to allow users to share network connections. Now it is using this homebuilt framework to power FireChat on Android, too.

The range of the Android network is about 30 feet, but thanks to Open Garden’s multi-hop network, it could cover a far wider range if a lot of people are using the app.

Sadly, this means the Android version isn’t interoperable with the iPhone version when you are using it off the grid, simply because the mesh networks aren’t compatible. FireChat’s global chat mode, however, is interoperable, but despite the company’s best efforts to add spam controls, that can still be a pretty rowdy place — the Internet, after all, doesn’t always bring the best out of people when they can be anonymous.

On iOS, the app quickly shot into the top 10 lists of many local App Stores, and chances are it will do quite well on Android as well.