We all know that chat apps are pretty hot right now and there are plenty of companies hoping for a WhatsApp-like exit. For the most part, all of those apps are pretty similar, but FireChat, which is launching today, adds a new and fun twist to this genre. It’s a hyperlocal chat network for iOS that even works when you don’t have an Internet connection.

It makes use of the Multipeer Connectivity Framework in iOS 7, which allows developers to discover Multipeer-enabled services on nearby iOS devices using Wi-Fi, peer-to-peer connections and Bluetooth. Because it relies on these techniques, the range is around 100 feet, but because of the mesh architecture behind FireChat, the actual range of the network around could be much larger. 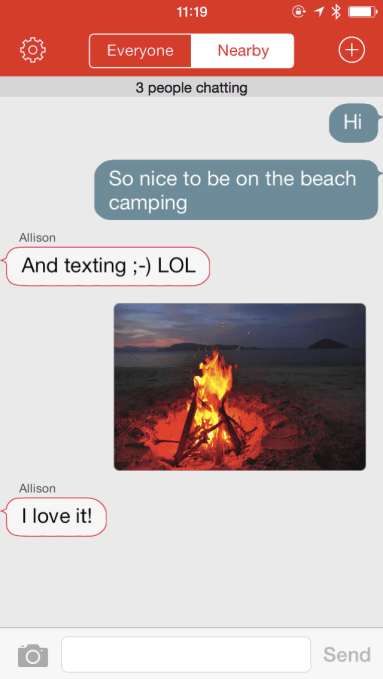 There have been some similar apps like this, but they all relied on the users being on the same Wi-Fi network. In a stadium or at an outdoor venue, that doesn’t work all that well. With FireChat, you could be using an iPod touch without any network connection and still chat with people around you. Besides chat, you can also exchange photos with everybody on the local network or just a single user.

In case nobody is around, the app also has a global chat mode that includes everybody on the network (with an Internet connection). So far, the team hasn’t segmented this global mode into different rooms, so things may get a bit noisy in there if the app gets traction (Update: and now that the app is available, that’s exactly what’s happening). If that happens, I’m sure the team will rethink this setup.

There are no user accounts, so there is no need to sign in and you can remain as anonymous as you would like to be (which is probably a good idea if you are trash-talking the opposing team in a stadium, for example).

According to Open Garden CEO Micha Benoliel, some of the use cases for this are events, conferences, conventions, outdoor festivals, classroom chats and maybe even dating.

FireChat is the first iOS product from Disrupt alums Open Garden, a company that’s best known for its network sharing apps. Benoliel hopes to one day bring the company’s flagship app to iOS, but for the time being, it’s only available on Android given the restrictions on Apple’s platform. The closest the team could get for now is FireChat, which only uses Apple-approved techniques for creating these device networks. Because Android doesn’t have an equivalent to Multipeer built-in, it turns out building this app for iOS is easier than replicating the experience on Android, so it may be a bit before the team launches an Android version.

If you want to give FireChat a try, the app is now available in the App Store. It’s available now in English, Japanese and Chinese.