Flyby, a new messaging application that lets you share text and recorded videos attached to objects in the real world, is the first consumer-facing app to use the image recognition capabilities found in Google’s “Project Tango.” That project, for those unfamiliar, involves an Android-based phone with advanced 3D sensors that’s capable of building visual maps of the world around it.

Flyby Media is the vision-based software partner for “Project Tango.” And that same IP is now being built into this Flyby application for broader consumer use.

The company was founded by Cole Van Nice and Oriel Bergig in 2010 to begin the development of this image recognition technology. Flyby’s CEO, Mihir Shah, who previously was CEO at Tapjoy, was later brought in to lead the now 20-person New York and Palo Alto-based team into new verticals. 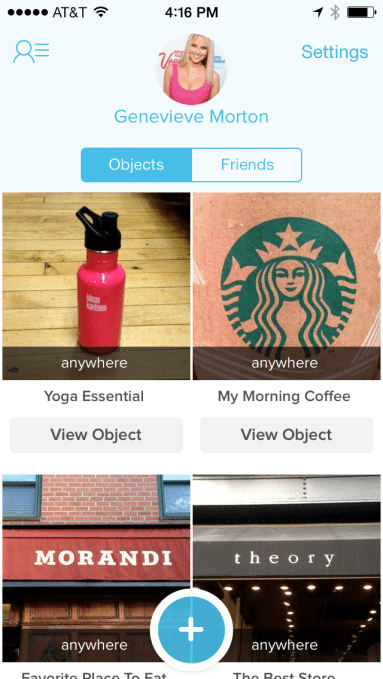 Explains Shah, he was excited about getting to work with something that was in the consumer space, rather than ad tech. “Something that I’m pretty passionate about is how to do you drive real context to worldwide consumers in content and message delivery,” he says. “Context is one of the hardest things to really address,” Shah adds.

In Flyby the “context” is the real world.

The app works by allowing users to “scan” any object in the real world using their phone – like a hat, a sign, a handbag, a coffee cup, a building, a tattoo, a poster, etc., etc., – which is then added to their collection of saved objects, Afterwards, friends can begin to send messages to those objects, as a way of communicating that’s a bit more serendipitous than when they’re just sending you a traditional text with media attached.

Recipients are alerted that messages are available when they’re in close proximity to an object that has a message attached. To “unlock” that shared video, they use the Flyby app to scan the object. The app’s image recognition capabilities are able to “see” and understand what that object is, which is Flyby’s big technical trick.

An Idea That’s Been Tried Before

However, the idea of attaching messages to things out in the real-world, or dropping them at specific geographic locations has been tried before, most recently by TechCrunch Boston pitch-off winner “Drop,” and most notably by Flickr and Hunch co-founder Caterina Fake.

“Real world” messaging seems like it should be a thing, but it’s really a quirky way to communicate, and frankly a bit cumbersome to manage. After all, if there’s something you want your friend to see, why not just send it to them? Why make them jump through hoops?

There are a few practical use cases one could imagine, which overlap with augmented reality applications. For instance: scanning historical landmarks, like statues, while on a sightseeing tour, or scanning some consumer good, like a desktop printer, in order to unlock a visual instructional manual. 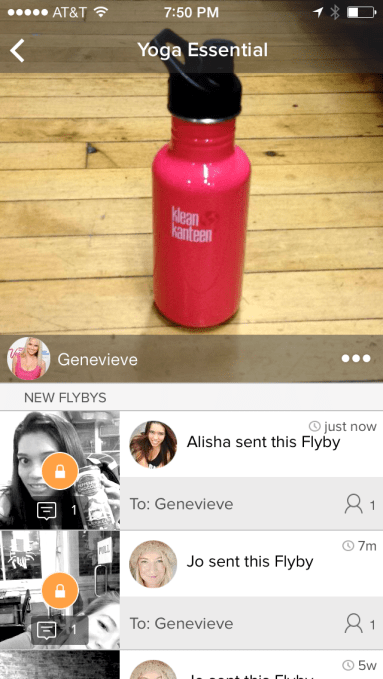 However, Flyby isn’t looking at practical applications for its image recognition technology with its consumer messaging app – it’s all about attempting to drive adoption in a space where others have failed time and again.

Shah admits that’s a big challenge, noting that “the hardest part is getting consumers engaged.” Everything that follows, including getting brands or consumer packaged goods companies on board to use their own products or packaging as “broadcast antennas” to reach a mainstream audience, would be easy, he says.

Flyby’s app, while not terrible, is confusing – especially since one of its first goals should be to very simply introduce this new concept of messaging around objects to its users. (It attempts this with an introductory tutorial and videos, but it doesn’t really connect.) When you press the main button, you’re prompted to “add an object” or “send a Flyby,” neither of which would make a lot of sense to someone who’s not entirely clear on the whole concept here, and is just trying to figure things out.

The company is trying to drum up some consumer interest by partnering with Sports Illustrated model Genevieve Morton at launch. She will use the platform to communicate with her fans in various ways. (Uh, yay?). 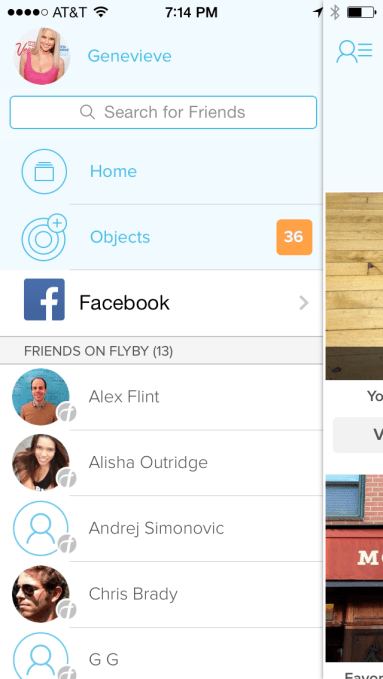 Flyby has other ideas in the works, too, including making its IP available to other app developers in the form of an SDK. But for now, its main claim to fame is its “Project Tango” connection.

The Flyby app works only on iPhone 4+ and iPad, as it has specific hardware requirements in terms of its image recognition capabilities. The company is currently working on a version Android.

The company has raised $10 million to date through seed and Series A rounds. The A round (north of $5M) was co-led by Observatory Capital and Clark, and included participation from Bosch Ventures and Chart Venture Partners.

Flyby Messenger is a free download here on iTunes.

* Correction: Findery refuted the rumors we had been hearing about struggles, so we’ve removed this statement from the post.