Facebook has just updated to let users choose the gender pronoun they associate with. Aside from the usual “male” and “female” options, users can choose up to 10 different gender definitions to describe themselves out of more than 50 options, including “cisgender,” “transgender” and “intersex.”

Not only will this show up on the user’s About page, but it will show up in all other pronouns on the site that refer to that user. This way, users will not only show up as he/him and she/her, but some may show up with the neutral they/their. So instead of getting a prompt that says “Write on Joey’s wall for HIS birthday,” the prompt will say “write on Joey’s wall for their birthday.”

You can change this by heading into the settings menu on your About page and clicking on the gender options. Alongside male and female, you’ll see an “Other” option. When “other” is selected, a list of 10 more nuanced options will appear.

But now it has the added LGBTQ options: 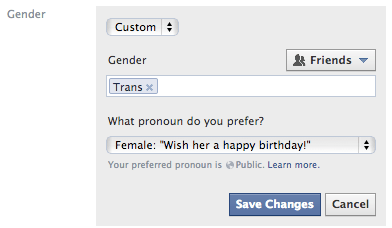 “While to many this change may not mean much, for those it affects it means a great deal,” said Facebook publicist Will Hodges in an email. “We see this as one more way we can make Facebook a place where people can express their authentic identity.”

According to the email, Facebook worked closely with LGBT activist groups to compile the new list of gender-identity options. Facebook also added a new privacy option that lets users select who sees their gender:

“We also have added the ability for people to control the audience with whom they want to share their custom gender. We recognize that some people face challenges sharing their true gender identity with others, and this setting gives people the ability to express themselves in an authentic way.” 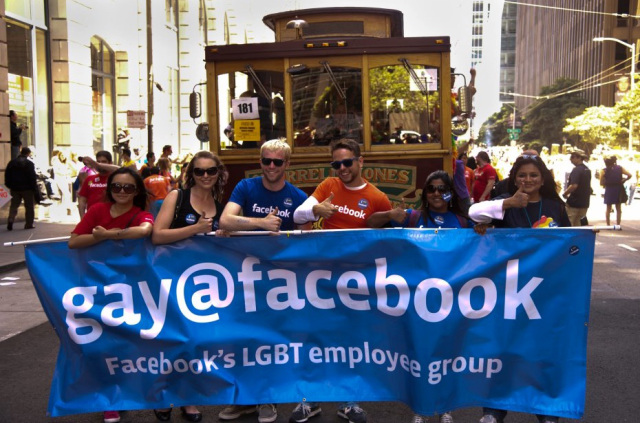 The update comes three years after Facebook added LGBTQ-friendly relationship statuses, including “in a civil union” and “in a domestic partnership.”

Facebook has shown a consistently progressive attitude towards gender and sexual preference over the year. The company won a Gay and Lesbian Alliance Against Defamation Media Award for fair and accurate representation of the LGBTQ community and issues that impact it. To combat bigotry, it released stats noting that 70 percent of U.S. Facebook users have a friend who lists themselves as LGBTQ.

In 2013, over 700 employees and CEO Mark Zuckerberg marched in the San Francisco Pride parade. It’s even painted the Hack logo in its Menlo Park headquarters’ courtyard with rainbow colors.

Both through its service’s options and its company culture, Facebook is setting a positive example for how tech can promote tolerance. This could help it attract LGBTQ talent and users, and push other companies to build in compassion for all people. 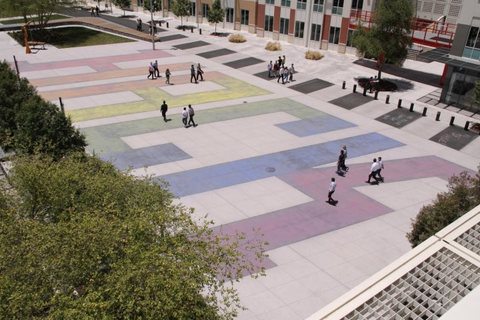