The way we communicate is increasingly visual. The devices that we carry with us are uniquely suited to both capturing and displaying stories primarily comprised of images, rather than words.

Snapchat and Instagram are good examples of the changing ways we’re communicating with each other, but their ‘atomic unit’ — the capsule that they use to present their shared content — consists of a single image or series of single images. Whether it’s the way that we’ve become addicted to the ‘stream’ or a sort of philosophical rubicon, most of the consumer Internet products we’re seeing aren’t shaking this model up too much.

On the other side of the coin we have content publishers who are riding on centuries of experience creating books, magazines and more with strong visual components. But they don’t seem to get devices like tablets and smartphones at all — opting to repackage existing content or minimally revamp their workflow to serve customers using hyper-personal computers.

It’s self-evident that our casual communication languages are going to default to visual relatively soon. There are apps at every turn that are tearing away at the short-form visual problem — but where’s our long-form visual storytelling app built specifically for truly personal devices?

That’s what Storehouse, a new app and service for iPad from ex-Apple, Facebook and The Daily talent is looking to tackle. 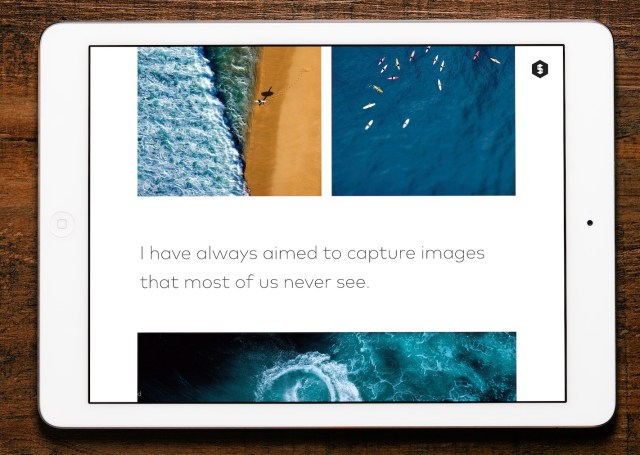 Storehouse allows you to import images or video clips from your camera roll, Dropbox, Instagram or Flickr. Once you’ve pulled them in, you can use the clever creation tool to arrange them into a story with a cover image and a completely free-form layout of your choosing. Tapping on an image will let you drag it across in any configuration of horizontal or vertical slicing, and snap it to an invisible grid. You can also pull them out to a full bleed view if you wish.

It’s impossible to describe just how well the team has nailed it until you start playing with the app yourself. I’ve used an enormous amount of apps to lay out images and present them, both as a photographer and as just a guy who people give a lot of stuff to in order to test it. The system here is quick, smart and never frustrating, and gives you just enough control without throwing you off into the deep swell. Videos can be inserted right alongside images and played back with a tap. They can also be used as a cover image to add some visual pizzazz in the story browser — setting the tone for the story within. You can add text if you wish, and that is nicely formatted, though it’s clear that photographs and video are first-class citizens here.

The app is available solely for iPad at the moment, though other platforms aren’t ruled out by anything but time and effort. And the stories can be shared to the web in a fully responsive layout that looks good on any device. 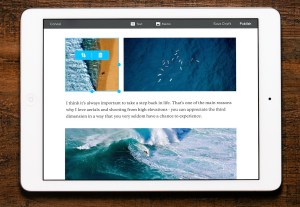 I spoke to Storehouse co-founder Mark Kawano about what the company hopes to accomplish besides developing a nice portfolio creator.

“We’re not targeting just photographers; we want to teach everyone that they can tell stories,” Kawano tells me. He points out that, when the communication is visual, it doesn’t matter what language you speak. “We want Storehouse to be the really easy way to share and create stories. From photographers…to everyone, this is the shift in visual communication.”

Storehouse, Kawano says, comprises both a set of creation tools and distribution tools for visual communication. Since users can publish to Storehouse, where all stories are currently public, though not indexed or searchable, this will affect the way that they publish stories.

“Knowing that it’s public and can be distributed shapes the way you create and share,” says Kawano. Not having nested privacy controls as a part of the app at launch is a calculated decision, though Kawano doesn’t rule out more control coming in the future. Storehouse, he says, embraces distribution as part and parcel with the creation process.

“A word processor document or Keynote file, those are not public,” Kawano says, noting that “who is Word for” is a hard question to ask. Storehouse is not exactly “for” anyone; it’s for a task. Kawano says that he doesn’t want Storehouse to be for a specific set of people — just anyone who has a story to tell. 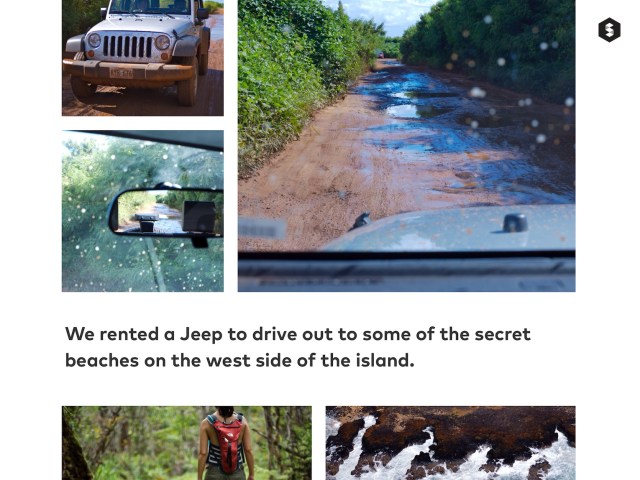 Kawano certainly has a background in tool building for photographers, and it would have been easy to go down that path, but he’s out to make a bigger impact.

Kawano is partnering with co-founder Tim Donnelly, who comes via The Daily, to create Storehouse. The pair was frustrated with the apps and offerings that existed for storytellers and how the iPad was being used — or not used — to facilitate new ways of displaying and distributing visual stories.

They are both designers and fairly technical. Donnelly codes as well, and they’ve built a team that includes ex-Apple and ex-Facebook talent. Kawano was previously a designer at Apple on the Aperture and iPhoto teams before joining its Worldwide Developer Relations team as a user experience evangelist helping companies refine their user experiences. Before that he worked at Adobe on Photoshop and Camera Raw.

After a few months of prototyping, they settled on what is now Storehouse and raised a seed round in June from True Ventures, Lehrer, SV Angels and a few individual angel investors.

That seed round was a product of asking some hard questions about what they wanted to build.

If they were bootstrapped, Kawano says, they could have riffed off of what Storehouse was to build a creation tool for photographers — or they could have built a magazine to throw their subjective gauntlet into the publishing ring.

But, says Kawano, those addressable markets were too small if he and Donnelly were going to do what they set out to: really change the way people think about and use tablet content creation tools.

And there were other factors, as well. “We had made so many [personal] sacrifices…we needed to justify them,” Kawano tells me. “We work hard and we care, whatever we build we’re going to spend a tremendous amount of effort on. If we’re going to do all of that then we’re going to take advantage of the effort to build something that really moves the needle.”

Many media companies end up building apps around the content to facilitate what they’re already producing for other venues like magazines. The alternative is apps that think too small about how to present visual content.

As for what Storehouse’s chances are of making it over the hump to traction, we’ll see. The experience is certainly compelling, especially once the app started to flesh out with content from creators both amateur and professional. There’s a manually curated set of stories for now and many of those show off the unique intermix of photos and videos very well. Even if you’re just slapping a bunch of vacation pictures in to share with the family, though, there’s still something there. The ease of the layout tools and the beautiful presentation elevates even mundane images and video.

And video is certainly a major part of what makes Storehouse different from other visual story creation apps I’ve seen. “It’s a window into a world where there’s no beginning and end,” says Kawano.

Storehouse allows each clip to be of lesser importance but still add to the story in ways that a photo cannot. Sharing bundles of video clips together hasn’t been easy or feasible in a storytelling context. Most of the video-sharing services on the web are based on viewing single clips. Vine comes close, but the atomic unit is still “one Vine.”

In order to encourage you to share and include video, the basic unit of shareable content on Storehouse is a “story.” This means that you can share multiple short clips of video that work within a theme, or just as scene setting, but may not work at all on their own on YouTube or what have you.

This could encourage people to share video that tells a story about a place, but may not have a particular subject or pivotal event. AKA, the videos you leave behind in your camera roll.

There are definitely no shortage of competitors on the publishing side of things, like Prss, Magzster and more. As I mentioned earlier, though, these are often focused on helping publishers replicate the exact experience of a magazine digitally, and that’s definitely not the same tree Storehouse is barking up. On the other end of the scale you have consumer Internet apps like Snapchat, Frontback, Instagram and Facebook offering you the ability to deposit single images (or albums in Facebook’s case), but not a lot of storytelling tools. Then there’s the new breed of digital publishers building cool stuff for mobile like Offline and Glide — but most of those aren’t platforms yet.

Storehouse could thread the needle between these two groups — providing a sincerely mobile-centric publishing tool that spurs long-form visual storytelling along. There feels like room here for an app to democratize the creation of stories that feel like they came out of a high-end design tool.

The testers of Storehouse are already producing some pretty great content. From travelogues to simple stories about an old friend, they all look great — and they’re not all coming from professionals.

As for what Storehouse has set for the future, Kawano won’t say much. But he does say they cut a lot of features from the first release. “Saying no lets you focus,” he says. Among those are the inclusion of browsing or search, and the limit to a simple follower model where you only see additional content from the people you follow.

“We know that with long-form content creation…there’s a longer growth curve,” he adds, noting that in order to make sure that everyone has a great experience, they needed polish. “We needed to make sure the features and the backend would all work and would hold up.”

For now, the launch product is certainly gorgeous. If you’ve got images that you’ve been wanting to share in a format that isn’t a simple grid of thumbnails, or that you had just a few pieces of context to add to, it’s worth a try.

Storehouse is live in the App Store here.