Making complicated decisions is an emotionally fraught process and (if you are like me) the whole thing can leave you feeling paralyzed. ChoiceMap is a new free iPhone app that helps you break down complex dilemmas into a list of priorities, rate them by how they will affect your life, and then uses an algorithm to score decisions. You can use it for everything from figuring out the future of your relationship to just deciding what to eat for dinner.

It might seem a bit strange to use your iPhone to make the kind of decisions you’d usually talk over with a friend or hash out in your head (or a journal), but there are already several apps out there intended to help you make sense of your feelings. For example, TechCrunch’s Sarah Perez recently profiled Feels, which she described as “the pro/con list for the smartphone, emoticon-favoring generation.”

Both apps can help turn a mass of frazzled thoughts into cool, rational decisions, but I don’t think the two necessarily need to be seen as competitors. We all process things in different ways. For some people, seeing the emoticons Feels produces is helpful. For others, the bar graphs and percentages ChoiceMap uses to rank and rate your options are the way to go. Of course, the numbers only mean what you want them to mean, but looking at them gave me a much-needed moment of clarity on some issues that have been causing me a lot of anxiety. 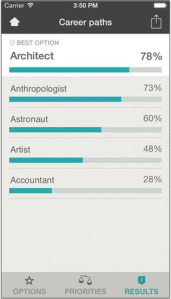 Over the last week, I’ve used ChoiceMap to organize my thoughts and feelings on stuff ranging from what movie to watch next, as well as more personal issues I am too discreet to put on TechCrunch.

Back in May 2013, I wrote about an app called Expereal that was inspired by Daniel Kahneman’s 2010 TED talk “The riddle of experience vs. memory” and helps you keep track of your emotions by rating them on a 10-point scale each day. Emotions tend to play tricks on our memories and Expereal is intended as a tool to help users keep their recollections of certain events or periods of time free from cognitive bias.

ChoiceMap’s developer Jonathan Jackson was also influenced by Kahneman’s work. In this case, ChoiceMap draws on the psychologist’s writing about decision-making. In his book Thinking, Fast and Slow, Kahneman states that our thoughts are affected by two systems.

System 1 “is basically intuition, a black box. It’s hard to know what priorities influence our gut feelings. System 2 is slow, methodical, and conscious,” explains Jackson. “With ChoiceMap, you weigh priorities, so decisions reflect what you care about the most.”

As seen in the video above, Jackson was inspired to make ChoiceMap while working through important and complex decisions about his career path, which city he should move to, and a potential relationship. In addition, Jackson also worked with Ashoka, an organization that helps social entrepreneurs decide which social issues to tackle.

“I realized that the algorithm I wrote solved a personal problem: where I should move after grad school, but the math had the potential to solve a major social problem: everyone makes mistakes,” he says. “That triggered the idea of a digital platform to help everyone make better decisions.”

One of the things I like best about ChoiceMap is that you can create your own list of options or select from a wide assortment of templates for decisions ranging from “outfits” and “cars” to “breakup or stay together,” “baby names” and “career paths.” Jackson decided which templates to include by using ChoiceMap, of course.

“We compiled a list of suggestions from friends, beta testers, and our own lives. We ChoiceMapped that list and turned the top results into templates,” Jackson explains. “We researched each template’s priorities, too, to make sure we included important factors for each decision.”

I wish I had ChoiceMap when I was making the decision to move abroad several years ago. Instead of just sitting around dealing with a crazy-making mix of worry and excitement or engaging in anxiety-provoking discussions with friends (“There are a lot of mosquitos there. You’ll get bitten to death.”), ChoiceMap could have helped me sort out my hopes and fears in a much neater, more methodical way. Of course, you can do the same thing with pen and paper, but, to be honest, seeing the results of ChoiceMap’s algorithm is pretty fun and often enlightening. But ultimately, Jackson says the app does not set out to make final decisions–that’s still up to you.

“The funny thing is–with ChoiceMap–people don’t need to decide what’s best. They need to acknowledge their own priorities,” says Jackson. “ChoiceMap helps people clarify these priorities one step at a time. As users walk through ChoiceMap, they feed our algorithm everything it needs to rank their options. So, at the end of the line, people discover that they’ve already made the big decision through a series of tiny steps.”

ChoiceMap plans to start raising funds this month to create a larger platform for a wide range of decision making and already has a monetization plan in place. Jackson refrained from sharing too many details, but says “global-decision making is a big market.”

Future plans “extends well beyond the iPhone app,” he tells me. “We plan to change the way the entire world makes decisions–from picking the size of a latte to passing foreign policy. The app is a tiny step toward a much larger decision-making platform.”