Torn up by a complex decision you need to make, and that pro/con list just isn’t helping? A new app called Feels can help. Feels is a recently launched app designed by three students at the Savannah College of Art and Design that offers a clever, quick way to work through your decision-making process via a simple and colorful iPhone app interface.

Think of it as the pro/con list for the smartphone, emoticon-favoring generation, perhaps. 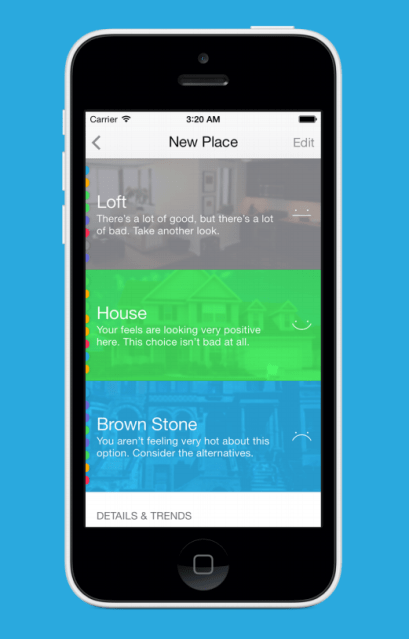 To use the app, you enter the name of a decision you’re struggling with (e.g. where to move, taking a new job, etc.) and then the various factors influencing that decision. For each option, you can attach a photo, then swipe over the text label next to every influence to add your “feels” (that is, your feeling) about the matter. A new apartment that’s close to work might get the smiling emoticon, for example, while the fact that it’s expensive might get the frown. And there are several emotions to choose from in between, of course.

It’s almost silly, but there’s something to having all these decisions before you, not just in black and white as with pros and cons lists, but weighted by a variety of factors and your emotions associated with those items. For instance, the app told me — pretty accurately, I think — that my pipe dream of a decision to move to a downtown condo is probably not the best one with regard to the other factors that are important to me and my family. (I’ll admit I’ve been blindly devoted to this idea for some time, but Feels is right in telling me that it should not be my top consideration.)

To be clear, the app doesn’t just spit back one decision, but rather displays your list of options and your overall feeling about each, based on all the influences you previously provided. The idea, co-founder Joseph Albanese explains, is to offer an emotional scale designed to give users a more in-depth approach to gauging how they really feel. For decisions with a larger number of factors, Feels will also offer a “Details and Trends” section about the data you’ve submitted. 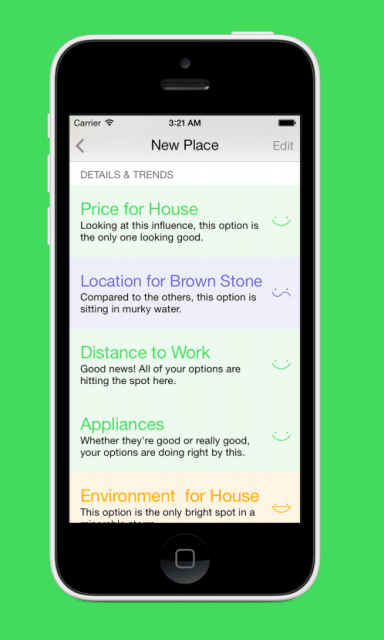 The app was a joint effort between Savannah College of Art and Design (SCAD) students Albanese, Wyatt Gallagher (recent grad), and Ameer Carter. They put the app together in nine weeks, says Albanese, as part of a class project.

“This is the first iOS app any of us have ever shipped,” says Albanese. “We came together because we wanted to build something even though we had no idea what it would be. We worked relentlessly for weeks to get this from initial concept to shippable product,” he explains. The class required that, by week nine (of a 10-week quarter), the students had something submitted to Apple for review.

For a student project, Feels is surprisingly well done and fun to use. The team will now work on UI enhancements, and making the process even simpler and more collaborative, they say.

You can snark if you like about the need to use an app to help you think through things, but some people need to work through their thoughts by putting them down on paper. This is the modern-day update to that. I feel I might actually use this one.