Emotions play tricks on our memories, making our recollections of events much happier or heart-wrenching than they actually were. Smartphone app Expereal seeks to cut through those cognitive traps by allowing you to rate your day on a 10-point scale and organizing that data into easy-to-read charts.

The iOS app (Android and Web-based versions are planned) is the brainchild of Brooklyn-based digital strategist Jonathan Cohen, who was inspired by psychologist Daniel Kahneman’s 2010 TED talk “The riddle of experience vs. memory.” Kahneham argues that our memories are often distorted by cognitive biases. For example, one bad day can completely spoil someone’s memory of an otherwise pleasurable two-week vacation.

When designing Expereal, Cohen decided to stick to a 10-point scale to help users keep their ratings objective. 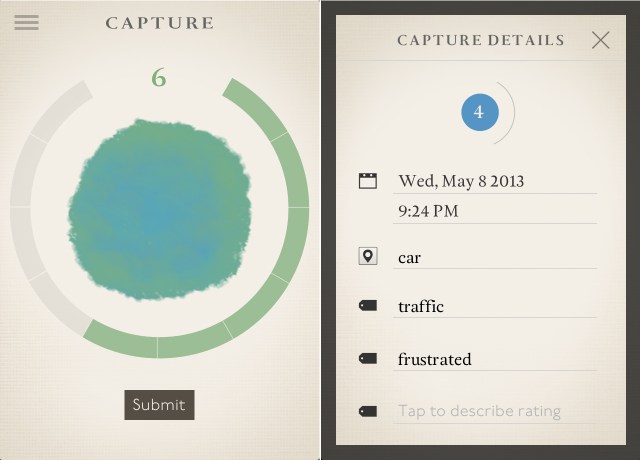 “I could have potentially asked people to pick a word to describe their mood, but what I like about numbers is that in order to get the full breadth and benefit you also have to enter tags and give meaning to it,” says Cohen.

Expereal’s first screen allows you to rate your day (or part of the day, depending on how often you use the app). Then you can note your location and the people you are with, add tags and snap a photo. A drop-down menu takes you to a set of charts that visualize your ratings by day, week or month, and compares your numbers to all of Expereal’s users or your Facebook friends who also use the app (data is aggregated anonymously). The “Expereotype” option is an album of your in-app photos with embedded ratings, tags and locations. 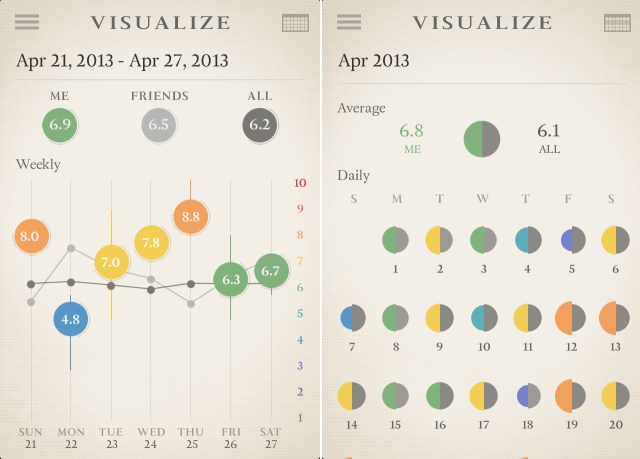 “None of these services in my mind really address the fundamental question–‘how is my life going and how is it trending over time?’ I thought that by having a better understanding of this over time, it would be an interesting way to look back in order to move forward,” says Cohen.

Of course, Expereal is only as useful as the data you enter into it. The app’s notifications can be set to remind you to use it 1-5 times per day. While testing the app out, I found I was more likely to enter a rating if I was having a bad day because adding tags allowed me to vent. If my day was going okay, however, it was tempting to ignore Expereal’s prompt on my iPhone.

“It’s not immediately sticky,” Cohen admits. “But for many of us who are relatively happy in our lives, I think there is value in those moments of self-reflection.” He adds that Expereal is meant to “counterbalance to the immediate promises of contemporary best-selling self-help books and programs.”

I committed to using the app five times a day for two weeks and was surprised by my data charts. A couple days I had written off in my memory as a total waste of time (because of a headache or a task left undone) were actually rated quite high, and I realized I’m much more pessimistic than I thought I was. I already use Timehop as a scrapbook and Step Journal to keep track of my daily activities, but I like Expereal’s focus on mood tracking because it’s already motivated me to stop being so negative.

Cohen tells me he is continually working on the app’s data analysis so that the aggregate numbers aren’t skewed toward any particular part of the day or people who log onto the app more consistently than other users. He declined to give me specific numbers, but says Expereal currently has several thousand users.

Aside from being a handy life-tracking tool, Expereal is also beautiful, with minimalist graphics inspired by mid-century California design, graphic designer Reid Miles and Monocle magazine. The app was bootstrapped by Cohen, who is currently looking for investors and investigating several revenue models. Cohen envisions Expereal as part of a larger ecosystem that will eventually include books, seminars and other tools that tap into people’s desires to improve their lives.

“If you look at the world of self-help, that segment of the marketplace, there are all of these amazing books by behavioral psychologists out there,” says Cohen. “If Expereal can capture a piece of that marketplace, I think the potential is huge.”