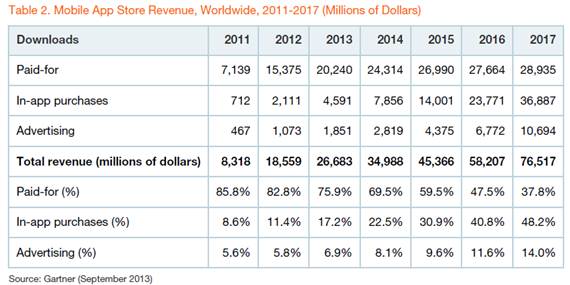 Ongoing trends in smartphone adoption — which this year finally outnumbered the amount of non-smartphones getting purchased — will drive 102 billion app store downloads this year, 90 percent of which will be on Apple’s App Store and Google Play, according to new research from Gartner. This will lead to global app revenues of $26 billion in 2013, and in the future, growth in revenues will outstrip that of app downloads.

With free downloads continuing to dominate the scene — this year, nearly 83 billion downloaded apps will be free, or 91 percent of all downloads — in-app purchases and advertising will continue to grow in importance for developers’ business models. This year, IAP will account for 17 percent of revenues to more than $4 billion, but that will rise sharply in the next four years, accounting for 48 percent of all revenues by 2017.

As a point of reference, in 2011, IAP was 11 percent of revenues. And as another point of reference, the analysts at IHS ScreenDigest believe that we’ve already surpassed a tipping point for revenues in app stores. Jack Kent, principal analyst for mobile media, says that this year, 80 percent of app revenues will come from in-app purchases. Gartner projects that IAP will only overtake paid download sales in 2017.

By 2017, Gartner projects that there will be 268 billion downloads annually, amounting to $77 billion in revenue. If accurate, this means that in general, app revenue growth is actually going to overtake that of download growth. Downloads will grow 2.6 times in the next four years, while revenues are increasing 2.9-fold.

Gartner adds that IAPs are in fact popular enough that they are even used effectively in paid apps. “We see that users are not put off by the fact that they have already paid for an app, and are willing to spend more if they are happy with the experience,” writes Brian Blau, a research director with the analyst group. “As a result, we believe that IAP is a promising and sustainable monetization method because it encourages performance-based purchasing; that is, users only pay when they are happy with the experience, and developers have to work hard to earn the revenue through good design and performance.”

Advertising, meanwhile, is a marginal driver of revenues for most app makers, not least because traditional display and search ads are formats that (as is the case online) mainly reward only the very, very biggest players. It will bring in only $1.85 billion in revenues this year.

Gartner notes that the proportion of free apps using advertising is actually falling: It will decline from 88 percent in 2013 to 86 percent in 2017. “In-app advertising is not yet an effective means of reaching targeted audiences for advertisers,” Gartner notes. “This is despite slow improvements in targeting, quality and measurement of in-app ads.” Indeed, innovations in ad tech will help make the case better for big brands to buy into mobile advertising, and to potentially mean that consumers respond better to the ads.

In any case, the trend away from apps that users need to pay just to download is very clear. It’s already having an effect on how developers are pricing on stores: Blau writes that free apps account for 60 percent of apps on Apple’s App Store, and 80 percent on Google Play.

Gartner doesn’t break out which of these two oversized app stores are bringing in the most revenue at the moment, but research from Distimo in August indicated that despite Android’s worldwide domination in handset sales right now, Apple’s iOS platform still drives more app revenues.

While a lot of people put this down to iPhone (and iPad) users being a more acquisitive and engaged lot, Gartner points to something else: consumers buy more apps when they are new users, and less when they have had their devices for a while. This would partly explain why Distimo, for example, notes that Android app revenues are up 67 percent in the last several months, while Apple’s are up by only 15 percent. Android has been pouncing on iPhone sales in that period.

That will also have a converse effect. “We expect average monthly downloads per iOS device to decline from 4.9 in 2013 to 3.9 in 2017, while average monthly downloads per Android device will decline from 6.2 in 2013 to 5.8 in 2017,” Blau writes. “This relates back to the overall trend of users using the same apps more often rather than downloading new ones.”

And although Blau did not add this, the other “switchover” to watch is the one that Apple is currently undergoing to iOS 7. More than an upgrade to iOS 6, it’s a complete visual and feature overhaul that has produced a rush of new versions of apps we all know and already use.

With developers talking of the massive hustle they’ve had to do to get their new versions up and running, the introduction of iOS 7 has definitely brought a lot of leading app players back into line with Apple. Now, depending on how successful Apple is with its new range of iPhone 5s and 5c devices, and how many users of older devices decide it’s worth the risk trying to upgrade older models to the new OS, it could have a strong knock-on effect on iOS downloads and purchases — and on the bigger apps picture, too.

It should come as no surprise that the bigger picture is totally dominated by Google and Apple. Blau writes that iOS and Android app stores combined will account for 90 percent of global downloads in 2017, in line with these two OSes accounting for 87.5 percent of the global installed base of smartphones and tablets by that year. And what about other platforms? Not great news today, nor tomorrow: “Other app stores — such as Windows Marketplace, BlackBerry App World and Nokia Store — and many communications service provider stores will account for no more than 10% of the
total downloads through 2017,” Blau writes. “This is due to either the small device installed base or device fragmentation.” Unfortunately for Nokia (and, soon, Microsoft) and BlackBerry, it’s almost certainly more do to that “small installed base” (ie no users) rather than the latter reason.

But while Google Play is strong, it’s not without lingering fragmentation by way of app stores based on forked Android implementations. That includes stores like the one run by Amazon for the Kindle Fire, but also app stores in China. Gartner notes that Google Play will take 47 percent of app store downloads by 2017, a decline from today because of the rise of “domestic” app stores from the likes of 91 Wireless and 360 Market in China.